While fans from around the world keep their focus on Brazil where teams from 32 nations are battling it out for the World Cup, Rita Santos-Oyama, a second-grade teacher at Catskill Elementary School in Carson, is watching the games for more than just soccer action: She’s looking for lesson plans.

For Santos-Oyama and other Los Angeles primary and secondary who participated in a special two-day seminar organized recently by the UCLA Latin American Institute, soccer is more than just a global game of strategic kicks and national pride. It’s an instructional pathway to teaching politics, economics and globalization. 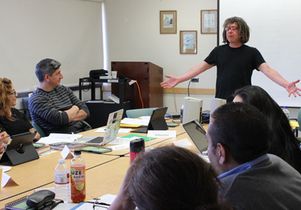 Teachers listen as soccer scholar David Goldblatt talks about the history of the game.

Funded by a Title VI grant from the U.S. Department of Education and cosponsored by the UCLA Center for Brazilian Studies, the seminar “Soccer in Latin America” provided K-12 teachers with an opportunity to hear from leading soccer scholars, read up on the history of the sport and take a guided tour of the Los Angeles County Museum of Art’s exhibition “Fútbol: The Beautiful Game.”

Santos-Oyama, an avid soccer fan and native of Brazil who has been teaching for 27 years, admitted that she was initially skeptical about how much material she would actually be able to take back to her classroom from a seminar focused on one sport. Yet, she was quickly impressed with the numerous ways she could creatively incorporate information into her second-grade curriculum.

In fact, after she took the seminar, students at her elementary school finished a six-week school-wide project that required them to research and learn about the history of the game and the countries participating in the FIFA World Cup games. They also analyzed math-related questions about soccer that were posted in school hallways.

And Catskill Elementary School wasn’t the only place where soccer scholars were being groomed. Another participant, Haydee Licari, who teaches English language classes at Dana Middle School, created a lesson examining racism and soccer — an issue that is an unfortunate part of the game's history and still impacts the sport today.

Licari's students were highly motivated and inspired by the topics examined, their teacher said. They became interested in "fighting racism" and "learning about different countries and perspectives. My students just keep digging deeper and inquiring about the logistics and economic impact around the globe."

David Goldblatt, an instructor at the seminar, a soccer scholar and journalist based in England, is the author of two books on the game: “The Ball Is Round: A Global History of Soccer” and the recently published “Futebol Nation: The Story of Brazil through Soccer.”

Captivating the teachers with his illustration of international relations through the history of soccer, Goldblatt recounted how he came to write “ridiculously long” books about politics and football. Writing these books, he explained, “springs from an impulse to find ways of engaging young people in subjects that they might not necessarily find interesting, but to do it through a medium, like football, that grabs them.”

Soccer  — known as "fútbol" in Spanish and "futebol” in Portuguese and referred to as "football" in English-speaking countries outside the U.S. and Canada — has its origins in England and Scotland. The sport spread throughout the English colonies in the mid-1800s and became a link between diverse cultures, said Goldblatt, a visiting professor at Pitzer College last spring. “It’s a good imperial legacy ... as far as imperial legacies go.” 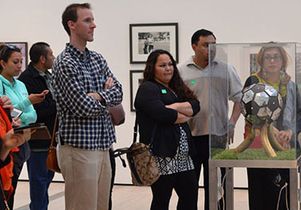 Cynthia Gomez/UCLA
Teachers take a guided tour of an exhibit on soccer at the Los Angeles County Museum of Art.

The fact that Brazil is hosting the 2014 World Cup as well as the 2016 Olympic Games reflects “the shifting of global power and world order” and the rise of the Global South, he explained.

True to Goldblatt’s word about soccer’s ability to keep a roomful of students engaged, many of the participants — teachers of such diverse subjects as math, government, Spanish and world history — have since used the sport as a way of introducing various social science themes.

Suzie Ahn, who teaches 6th grade at Nueva Vista Elementary in the city of Bell, made Goldblatt’s books as well as one by Joshua Nadel, “Fútbol: Why Soccer Matters in Latin America,” available to her students.

Ahn decided to quiz her students’ soccer aptitude about club soccer in Argentina. To her surprise, one of her students was able to expertly answer her questions in more detail than she had been given at the seminar.

This student “knows that soccer is a competitive sport and that not everyone becomes a Messi or Ronaldo,” said Ahn, “but he didn’t know he could become a soccer scholar. [He] is a soccer statistician, and the realization that there were indeed soccer scholars motivated him.”

Kerry Olinger, a history and English language arts teacher at Mark Twain Middle School, had a similar experience when she developed and implemented a unit in her 7th and 8th grade classes inspired by a chapter on women's soccer in Nadel's book.

Olinger assigned her students to examine eight sources of information, including images, videos and excerpts from the book. More of her students completed the task than she expected, said Olinger, who noticed that her students were engaged in the process and were “both enlightened and enlightening when it came to the subject matter.”

“Every day my students play soccer at school,” said Ahn, “but the magnitude of the impact that soccer has on them was something I didn’t realize until after the seminar.”

This was adapted from a story on the International Institute website.