A student is eagerly reading a colorful manga, part of a genre of Japanese comic books that’s become wildly popular with readers of all ages. Once she’s finished one, she’s on to the next.

It’s a scene you can observe in any manga café in Tokyo, but the setting here is UCLA’s Richard C. Rudolph East Asian Library, located on the second floor of Charles E. Young Research Library. The student is one of many who are using materials from the library’s new Japanese extensive reading collection that includes not only manga, but children’s books, novels and nonfiction works. 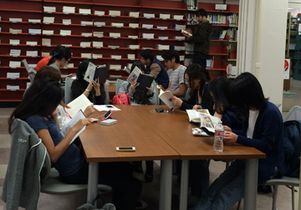 Extensive reading is a language-learning approach that supplements classroom instruction with free reading for pleasure. And the 500-volume collection has increased UCLA students' enjoyment of reading in Japanese, instructors have reported.

The expansion is the result of efforts by librarians and administrators at UCLA’s Asia Institute to rethink the use of the library and to adapt to new trends in library collections.

Eishi Ikeda, a lecturer in Asian Languages and Cultures who teaches third- and fourth-year Japanese, said that he’s eager to use the new collection in his classes. He requires that students keep a journal about what they choose to read and submit regular book reports.

“Japanese pop culture fans are a heavily represented demographic in our language courses, and they are more familiar with manga than I am,” Ikeda admitted. “But most of them have never read these manga in the original Japanese.”

Although the Asia Institute had always supported the acquisition of Japanese, Chinese and Korean materials for the library in its budget, federal funding for Title VI programs was cut by 40 percent in 2011.

When funding was restored in the 2014 grant cycle, the Asia Institute and its partners began to rethink their approach to library support. According to Elizabeth Leicester, executive director of the Asia Institute, the goal was to design an innovative program that would not merely provide for book purchases, but create a sustainable collection that would outlast federal funding and reach a wider community of students and library users at UCLA.

“Mobile technology and remote accessibility of electronic resources beyond library walls and hours have challenged libraries to rethink the library as a whole,” said East Asian Studies Librarian Su Chen, who attended a presentation on Japanese extensive reading collections at a conference.

Meanwhile, Japanese Studies Librarian Tomoko Bialock, who joined UCLA in September 2014, had visited Tagengo Tadoku, a nonprofit organization that promotes extensive reading in Japan. Back in Los Angeles and eager to start the collection, Bialock said, “I went out on weekends to hunt for appropriate books in secondhand and other bookstores in town.”

Bialock’s arrival at UCLA allowed the East Asian Library to collect reading materials relatively quickly. She was able to launch UCLA’s collection by the end of 2014 so that instructors could make use of the materials in winter 2015 courses.

Linking the library and classroom

The Japanese language has features that make extensive reading a particularly useful approach. The language features a complex writing system that requires students learn and absorb large numbers of Chinese characters known as kanji. Ikeda said that the graded learning materials help students become more comfortable with the way Japanese appears on the printed page. Lower-level books include phonetic guides to show how characters are pronounced, while these visual aids gradually disappear in the upper levels.

Both the language instructors and the librarians at UCLA closely monitor students’ interest in the reading materials to help determine how the collection should be focused as it grows.

So far, Ikeda said, students are responding enthusiastically to the collection. Many have told him that their enjoyment of reading in Japanese has increased, and their confidence with the language has grown. They were also able to pick up vocabulary incidentally without depending on dictionaries, Ikeda said.

The collection has even become the subject of scholarly research by one of Ikeda’s graduate students, who is studying second-language acquisition.

Chen said she is confident about the future of the program. Librarians for Korean and Chinese studies at UCLA have already begun to plan collections for those languages, she said.

Chen, Bialock, Ikeda and Leicester gave a presentation about the Japanese collection at this year’s Council on East Asian Libraries conference in Chicago. Inspired by UCLA’s example, several other institutions, including Princeton University and the University of Arizona, have already begun efforts to build similar collections.

For more information, visit the library’s guide to the collection, which includes a video presentation by Ikeda. This story appeared originally on the UCLA International Institute website.