After 10 years of research at UCLA, the first mobile website to function as a storytelling trail guide to help people explore the past, present and future of certain downtown L.A. neighborhoods —  as they walk, bike or skateboard in those locations — was publicly released last week. 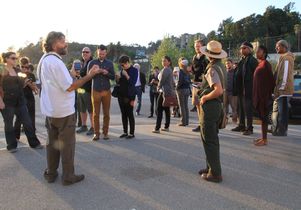 UCLA
Fabian Wagmister, director of UCLA REMAP who developed the concept for the mobile tool for urban exploration, speaks at a ceremony celebrating the launch of LASHP Trails.

Wellspring, an original, digitally interactive sculpture that serves as the mobile website’s trailhead, was also unveiled during an afternoon ceremony that took place under the North Broadway Bridge.  Designed by artists Michael Parker and Troy Rounseville, Wellspring features interactive light and sound created by IMLab.

LASHP Trails, created by a partnership among UCLA REMAP, California State Parks, the National Park Service, the California Endowment and the City of Los Angeles, is the evolution of an idea that began with 60 students from Franklin High School in Los Angeles. Working with staff from the National Park Service and the Department of City Planning, the students designed urban trails connecting their neighborhoods to L.A. state historic park. The students envisioned the park as a “community trailhead” linking downtown, Chinatown, Northeast L.A. and the L.A. River with a robust system of walkways for pedestrians, bikes, wheelchairs, scooters and other non-motorized transportation within a 650-acre area surrounding the park.

“Because of my extensive research in the history of the neighborhoods they were exploring, I was invited to speak to them about the area,” Wagmister said. “I was so inspired by their work I immediately started imagining a flexible digital media tool to allow many community groups to do their own interactive trails.”

Wagmister and UCLA REMAP executive director Jeff Burke developed the concept of a mobile website that intensifies users’ “connection to place” by exposing them, through their smartphones or tablets, to the oft-hidden history and potential futures of these locations along these urban trails as they are standing there.  Organizers hope this will encourage people to walk the neighborhoods, so the only way to engage the content of the project is to be at the trailhead with a mobile device.

“We hope to make people more aware of the process of urban transformation, promote their civic engagement and empower them to participate,” Wagmister said. 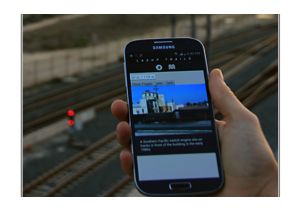 UCLA
Trail users can read about the past, present and future of a neighborhood as they stand there.

The LASHP Trails project was truly collaborative, with more than 30 student researchers from UCLA contributing to the creation of the content. Also instrumental in the making of this digital tool were  countless community partners and individuals who generously shared images and stories about their neighborhoods.

LASHP Trails marks one of IMLab’s initial efforts to connect place-based content with the promotion of physical activity through urban trails near the park.

Wagmister and his team are already working on a much larger project that would enable community groups throughout the city to “create interconnected trails based on their identity, their needs and their aspirations,” he said. “We hope such a system will connect with the city and with our fellow Angelenos.”

The original story can be found on the School of Theater, Film and Television website.