Two remarkable UCLA alums working in the film and television industries hope that Hollywood is leaping toward a “movement,” not just a “moment” when it comes to celebrating and investing in diversity.

As part of the recent launch of UCLA’s fifth annual Hollywood Diversity Report, Darnell Hunt, dean of the division of social sciences in the UCLA College, welcomed to campus Gina Prince-Bythewood and Felicia D. Henderson to talk about the diversity issues in film and television.

Prince-Bythewood is writer-director of the award-winning 2000 film “Love and Basketball” as well as “Beyond the Lights” and “The Secret Life of Bees.” Her upcoming projects include a film adaptation of author Roxane Gay’s debut novel, “An Untamed State.” Prince-Bythewood is also the first African-American woman to direct a major-studio superhero film, as she takes the helm of Sony’s “Silver and Black,” set in the Spider-Man universe.

“We are seeing a change, but not consistent change,” Henderson said, pointing to the fact that 2013 was a banner year for filmmakers of color, but one that did not play out in the following years. “The more you see a success story like ‘Black Panther,’ while you celebrate it, it also freaks you completely out, because you don’t want it to just be a moment.”

Henderson pointed out the powerful marketing and budget around “Black Panther,” and the ways in which stars like Black-ish’s Tracee Ellis Ross got behind the film — even buying out theaters in neighborhoods so members of the black community could see it.

“How do you make it a consistent change or ‘normal’ to have such movies as opposed to a moment?” said Henderson to the audience of people from campus and the industry at the Meyer and Renee Luskin Conference and Guest Center. “How do we do that so it’s a movement instead of a moment?”

Answering that question and others that seek to explain Hollywood’s slow progress toward gender and racial parity is what makes the Hollywood Diversity Report and its year-over-year tracking incredibly important, she said. 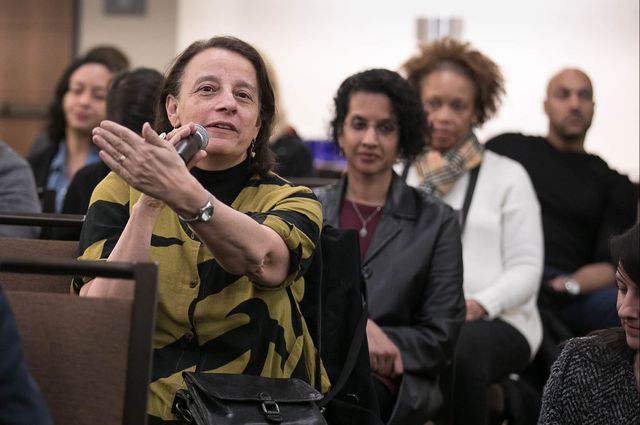 As this year’s Hollywood Diversity Report shows, white men still fill a majority of credited roles in front of and behind the camera. And their continued domination of executive suites has a major influence on what kind of projects get a green light, Prince-Bythewood said.

She shared her experience pitching “An Untamed State” to several studios. Prince-Bythewood is an award-winning writer and director, the book upon which the project is based is a critically acclaimed best-seller, and also attached to the project is a three-time Academy Award nominee Michael De Luca. The book and film is survival story about a Haitian-American woman who is abducted, tortured and raped as she is held for ransom.

Prince-Bythewood said the first three pitch meetings were to rooms of white men, who listened politely, but were clearly uninterested.

But there was a palpable difference in the tone of the meeting when she pitched to Fox Searchlight, where the decision makers were two women of color. They bought the project before the meeting was over.

“It was one of the best experiences of my life,” Prince-Bythewood said. “They just got it. They just felt it in their souls. We’re passionate about this project, but they might even be more passionate about it. The people we are pitching to, who are sitting across from us, they are going to greenlight what they respond to.”

During her Oscar acceptance speech this weekend, Frances McDormand, star of “Three Billboards Outside of Ebbing, Missouri,” called for the industry to use “inclusion riders,” contracts that would require film and television projects to aim for gender and racial parity both on screen and off.

This is something Henderson committed to 15 years ago with “Soul Food,” requiring that half of all the episode directors in the series be women.

“I got a call from the Director’s Guild marveling that just by me doing that, the number of female directors in that year went up 75 percent,” she said. “That should not be. Things should not be so dismal that one showrunner’s choices can make that big of a difference.”

Another UCLA alumna, Ava DuVernay, who directed “A Wrinkle in Time,” which comes out March 9, has taken steps to increase representation behind the camera. The first African-American woman to helm a film with a budget of more than $100 million, DuVernay required all her department heads to be prepared to show proof that they had considered women and people of color for jobs. On her television show “Queen Sugar,” all the episodes have been directed by women. 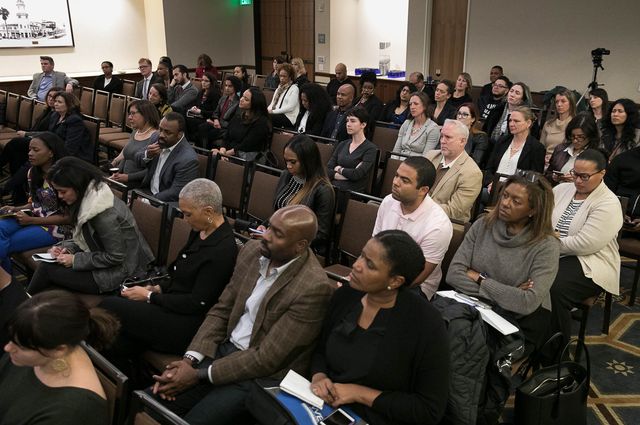 Reed Hutchison/UCLA
People from UCLA and the entertainment industry attended the launch event and discussion for the 2018 Hollywood Diversity Report.

Henderson observed that women and people of color are making more progress in television, pointing to Shonda Rhimes as an example. She said she hopes that film and television artists and producers embrace the creation of storylines and casting that specifically highlights the different cultures, behaviors and belief systems of people of color.

Henderson said that for executives the easiest way to show diversity is to hire some black people, which is one of the reasons numbers continue to improve for this section of the population in Hollywood. But if all characters are written with homogenous behavior and attitudes, that’s not really diversity, Henderson said.

“I thought, ‘Oh my gosh, I’m just going to be able pitch all kinds of stories about black folks, this is going to be amazing,’” she said. “And yet what I found literally for five years of trying to pitch things that had the black experience at the center of it was excuses for ‘Soul Food’’s success, rather than a desire to extend it. I got a lot of, ‘Well, it was cable so you could depend on language and nudity,’ as if my storytelling depended on those things, which is incredibly offensive.”

When asked what advice the women would offer students or aspiring artists, Prince-Bythewood said passion and stamina are key.

“‘Love and Basketball’ took a year and a half, every studio turned it down, and then with ‘Beyond the Lights,’ everyone turned that down twice,” she said. “You will get a thousand ‘nos’ in this business so make sure you are passionate about the story you want to tell because that's going to get you up off the floor and keep fighting.”

Henderson pointed out that for artists of color there is a different reality at play, especially when they are the only person of color in a room.

“I always tell my students, you do not have to be the smartest person in the room, but you do need to be the one who works the hardest,” she said. “Particularly for a person of color, just being as good as everyone else is not good enough.”

“I just pick up my cell phone and go, ‘hold on I have to call the committee,’” she joked.