Can a new app that takes a scholarly yet playful approach to studying calligraphy help students learn to read classical Japanese texts the way people in 11th century Japan did?

That’s what Michael Emmerich is counting on as he joins forces with scholars at one of Japan’s best universities, Waseda University in Tokyo, to develop and launch a new app, called the Hentaigana App, now available for Google’s Android and Apple’s iOS systems. It became Appbrain’s No. 1 most downloaded app in the free educational category the day after it was released last month.

It’s just one of the many projects Emmerich, a UCLA associate professor of Japanese and well-known translator of Japanese fiction, has worked on since leading an initiative to help transform UCLA’s Department of Asian Languages and Cultures into a world-class center for the study of Japanese literature and culture, propelled by a $2.5 million gift from Tadashi Yanai. He is chairman, president and CEO of retail holding company Fast Retailing, and the visionary behind its chief subsidiary, the global apparel retailer Uniqlo.

If successful, the app could serve as a model for similar tools to teach scripts used in a wide range of ancient and medieval manuscript traditions.

“For example, students might use apps of this kind to learn to read stone inscriptions from ancient Greece and Rome; or Greek papyrus fragments of the kind that have long been excavated in Oxyrhynchus, Egypt; or the Hebrew, Aramaic, and Greek of the Dead Sea Scrolls; or bronze inscriptions and bamboo texts from ancient China,” said Humanities Dean David Schaberg, a scholar of classical Chinese poetry and thought. “In every case, reading the handwritten versions of the language takes specialized skills that are not necessary for reading modern printed versions of the same texts.”

Until the 1600s, literature in Japanese circulated in handwritten manuscripts, explained Emmerich, a specialist in both classical and contemporary Japanese literature. It wasn’t until the 17th century that commercial publishers began selling woodblock-printed books — and even these reproduced handwritten calligraphy. 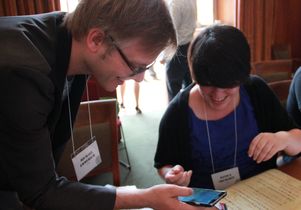 Learning to read even relatively simple premodern calligraphy takes special training, because calligraphers had the option of writing each of the 47 syllables in the Japanese language using a number of different forms. The same syllable can potentially be written six or seven different ways and sometimes even more, Emmerich said. “For the app, we focused on the basics; even so, we had to include 137 variants. The forms all have different origins, too, so they don’t look at all alike.”

In Japan, scholars of premodern literature have learned to read calligraphy as an important part of their training, but that’s not the case for scholars outside Japan who have generally relied on typeset critical editions.

“Critical editions are invaluable, of course, but you can do a lot more when you have the ability to read works, or particular copies of works, that have never been transcribed — and not just books, but diaries and letters too,” Emmerich said. “You can ask all kinds of questions when you’re looking at a copy of ‘The Tale of Genji’ that a warrior commissioned from a down-and-out aristocrat 600 years ago.”

There’s also value in the experience of reading calligraphic texts. “We’re so used to type that it’s easy to forget that, say, ‘The Tale of Genji’ was written more than 1,000 years ago,” Emmerich said. “The very difficulty of reading calligraphy reminds you just how much separates contemporary readers from the Japanese court a millennium ago. And, of course, the calligraphy is often incredibly beautiful.”

Recently, at universities outside Japan, there’s been rising interest in teaching students to read classical Japanese texts in their original form. Cambridge and the University of Pennsylvania, among others, have hosted workshops for this purpose.

To develop the app, Emmerich assembled a team that included fellow scholars, undergraduate and graduate students at UCLA and Waseda, experts in digital tools at the UCLA Library, and a programmer and graphic designer. Graduate students at Waseda selected calligraphic samples from manuscripts in Waseda University Library’s special collections. Then a UCLA student digitally extracted the samples.

App users see these samples presented against colorful, richly decorated backgrounds that were also chosen from precious manuscripts at Waseda. Rather than use ordinary type to identify the syllables, Emmerich asked celebrated calligrapher Watanabe Daigo to lend his own modern calligraphy to the project.

On screen, students can study a handwritten Japanese syllable, known as a kana, taken from a manuscript from the 15th to the 17th centuries. Then, with their finger, they can flip the elegant form over to see the Chinese character from which it was derived, presented in Watanabe’s calligraphy. On the same screen, they can see how the syllable appears in a modern typeface.

“Once you have learned the kana, you send it off the screen to the left with your finger, and then it’s basically gone for good,” he said. New kana will appear against a different background.

“But if you send it off the screen to the right, you’re saying, ‘I don’t know this one.’ In that case, new kana will appear, but on the same background. The one you didn’t know will keep coming back periodically until you decide you’ve learned it,” he said.

“We use the gorgeous backgrounds as a little reward,” Emmerich said, smiling. “It’s like moving to the next level in a game.”

With the beautiful calligraphy and elegant backgrounds, the app “has a very classical feel to it … and then you get to do this high-tech flip,” said Emmerich. “It’s like the intersection of classical Japanese literature and ‘The Matrix.’”

The app is a vast improvement over the way Emmerich taught himself to read classical Japanese calligraphy as a graduate student at Ritsumeikan University in Kyoto. When his professor informed him in his very first class that he would have to give a presentation in two weeks on a selection from a 17th century digest of “The Tale of Genji” for which no transcription was available, Emmerich had to find a way to learn it quickly.

Photocopying thousands of kana in a dictionary that showed the various forms used in premodern calligraphy, he cut them out and glued them to flashcards. “I learned to hold stacks of flashcards in both hands and flip them really fast,” he said, laughing. “I was kind of like a Western gunslinger.”

Incredibly, he did manage to get the basics down in those two short weeks. “I have to admit, though, that wasn’t fun. People gave me funny looks on the subway.”

The app is only the first in a series of educational tools he plans to develop with his colleagues at UCLA and at Waseda as part of the Tadashi Yanai initiative. To facilitate and cement the partnership, UCLA and Waseda have just signed a master affiliation agreement. Previously, the two universities had had a joint memorandum of understanding that expired in 2013.

“The app is just one example of how the UCLA Department of Asian Languages and Cultures is leading the way,” he said.