Some 200 UCLA medical students received their diplomas Friday, June 2, in Perloff Courtyard at the Hippocratic Oath Ceremony for the David Geffen School of Medicine at UCLA.

Addressing a sea of black-robed graduates, Dr. John Mazziotta, vice chancellor of the health sciences and CEO of UCLA Health, advised, “Remember that diseases are something you read about in a book or on a computer. But a patient is a human being in trouble. Reach out to each patient as an individual and make a difference in his or her life.”

The UCLA medical student body is as ethnically diverse as Los Angeles, where 70 percent of the recent graduates will remain for training. And while medical school is a tough road for any student, several newly minted physicians earned their M.D.s after overcoming additional hurdles of immigration and adaptation to life in the United States — or witnessing these challenges in their parents’ lives. 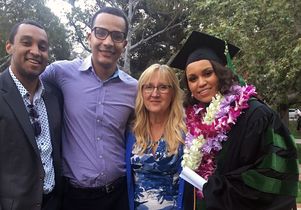 Erica Tukiainen, 30, moved with her family to the U.S. from Finland when she was 12. She spoke no English, but playing basketball in the U.S. provided her with a universal language and ultimately an athletic scholarship to UCLA. She served as the captain of the Bruin women’s basketball team while majoring in French and premedical studies. Tukiainen will enter a family-medicine residency at Kaiser Permanente in Los Angeles, where she will blend her interests in exercise and public health to help fight obesity.

Born to Iraqi immigrants, Mostafa Al-Alusi, 26, is among the first awardees of the David Geffen Medical Scholarships to graduate this year, debt-free. Funded by philanthropist David Geffen, the $100 million merit-based scholarship program lifts the burden of loan repayment for the top students in each class, covering all of their living and educational expenses. Al-Alusi will enter an internal-medicine residency at Massachusetts General and is interested in exploring entrepreneurial opportunities in medical technology. 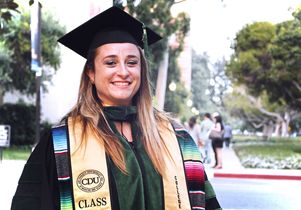 Janelle Rodriguez, 36, grew up listening to stories about how the Cuban revolution uprooted her parents’ lives and forced them to flee as political refugees before she was born. At 30, she similarly upended her life when she left a successful career as a biostatistician to enroll in medical school. The decision paid off when she earned a prestigious Albert Schweitzer Fellowship to work with teen mothers in East Los Angeles. She will pursue a residency in family medicine at Kaiser Permanente in Los Angeles.

Bryan Lam’s parents were Vietnamese refugees who crossed the ocean on rickety boats after the fall of Saigon in 1975. As a child, he spent weekends working in his mother’s beauty salon to help support the family. At UCLA, he led the Medical Gay and Lesbian Organization, where he mentored LGBT pre-med undergraduate students. Now 26, he recently returned from a global-health trip to Thailand, where he worked in HIV prevention. After completing a residency in internal medicine at Kaiser Permanente in Los Angeles, he aims to focus his practice on providing care for LGBT communities.

The school’s faculty and leaders, Mazziotta emphasized, value each graduate’s differences and support their future plans.

Dr. Kelsey Martin, dean of the medical school, shared her wish for the Class of 2017. “May you find a way of embracing both facts and empathy; always keep an open mind free from preconceptions as you care for your patients; and remain lifelong learners throughout your careers as healers and discoverers.”