When Kelly Schmader speaks to campus community members at UCLA’s Veterans Day ceremony on Nov. 10, he will be speaking from a deep well of appreciation for those who have served in America’s armed forces.

Schmader, UCLA assistant vice chancellor for facilities management, served as an officer in the U.S. Navy Civil Engineer Corps for 28 years. He started as a 22-year-old ensign at the Naval Weapons Station in Earle, New Jersey. Fresh out of Penn State with a civil engineering degree and a year of ROTC, his plan was to put in the four years he owed the Navy for college tuition assistance and get out. But his plans changed.

“I got in there, and I just had so much fun,” Schmader said. “The esprit de corps, the camaraderie — I couldn’t leave.

“I’ve been around the world with the Navy,” he said of a career that introduced him to remarkable people and extraordinary experiences — from witnessing the boots-on-the-ground bravery of troops he commanded in Afghanistan, to directing military cleanup efforts in New Orleans in the aftermath of Hurricane Katrina.

The Navy also prepared him well for life at UCLA, said Schmader who, with his team of 930 Facilities Management staff, is responsible 24/7 for maintaining and enhancing the campus’s densely packed 419 acres of buildings and grounds — from classrooms and laboratories to athletics facilities and the co-generation power plant. His military background also fills him with respect for the hundreds of UCLA staff members and more than 400 students who are veterans. And he smiles when he sees young ROTC cadets around campus. “I’m sure they’re going to have great futures,” he said.

Schmader’s Navy résumé includes five tours of duty with the Seabees (nickname for construction battalion or CB), troops trained in both construction and combat. He directed construction at a high-tech nuclear shipyard in Pearl Harbor and at a new naval base in an ancient volcanic crater in Naples, Italy.

In Afghanistan, he commanded a 4,500-person task force that drilled water wells and built command-and-control facilities for an international military contingent. His troops found themselves under attack regularly by Taliban snipers; two of his battalions were assigned to hunt for improvised explosive devices.

“That really opened my eyes to the sheer bravery of these young men and women,” said Schmader. “I lost 14 young men over there, and it was very, very painful.” But his resilient troops, he said, would “saddle right back up and go right back out the next day.” 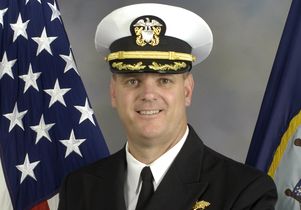 As U.S. Navy Capt. Kelly Schmader, he led Seabees on construction and humanitarian missions around the world.

Schmader and the Seabees also went to remote villages in places like Haiti and Papua New Guinea to build new schools. “Those were some of my fondest memories,” he recalled. “There was a lot of psychic income in that — seeing the faces of kids who couldn’t even afford a pair of shoes.”

In 2010, Schmader retired from his final post as commander of the 30th Naval Construction Regiment. Two months later, he was working for the L.A. Unified School District, where he helped steer the construction and modernization of 131 schools.

Then, in 2012, he seized a “once-in-a-lifetime opportunity,” as he put it in a Los Angeles Daily News report on his decision to join UCLA. “I've always wanted to work in higher education, and a prestigious place like UCLA — as an engineer, I couldn't pass it up.”

Facilities management at UCLA, Schmader said, closely parallels his Navy experiences in that field. Maintaining and renovating a wide variety of buildings; keeping plumbing, electrical, heating and air-conditioning systems in working order; landscaping, painting and cleaning — tasks like these are par for the course. But at UCLA, he finds a unique kind of fulfillment in performing these tasks for the benefit of everyone from students — including his daughter, a third-year Bruin — to scientists involved in world-class research, totaling around $1 billion annually.

“We contribute to that,” Schmader said. “Just to be around them and support them — it’s professionally rewarding.”

Schmader even found his reward in responding to the catastrophic flood on campus last July, when an LADWP water main burst, pouring 60,000 gallons of water a minute into Pauley Pavilion, nearby buildings and parking structures. Drawing upon his Hurricane Katrina experience, he called out his Facilities Management troops along with an army of temporary contractors to help stem the flood and handle the massive cleanup and recovery.

“Everyone was trying to pitch in,” including faculty, staff and students, recalled Schmader. “It was really heartwarming to see so many different communities within UCLA come together.”

People in the community will also be part of Schmader’s Veteran’s Day message to the campus.

“I want to pay tribute to the veterans who went before us,” he said, “and to today’s active-duty people who sacrifice so much and are spending so much time in combat zones.”

Recalling the thousands whom he led in the Navy, Schmader said, “The commitment, the hard work — it was eye-watering to see the passion that they put into their job every day.”

The campus community is invited to UCLA’s Veterans Day ceremony on Monday, Nov. 10, at 10:30 a.m. at Wilson Plaza. The ceremony will include remarks by Chancellor Gene Block and two UCLA veterans, Schmader and dental student Tigon Abalos. The event will also feature an ROTC color guard and information fair. Visit UCLA Veterans to learn more about campus programs and services for veterans.