Despite a Los Angeles city ordinance that voters approved in 2013 to limit the number of registered medical marijuana businesses to no more than 135 that have been in continuous operation since September 2007, UCLA researchers found that more than three times that number were operating in the city of Los Angeles as of 2014.

The UCLA Medical Marijuana Research team, led by the study’s principal investigator Bridget Freisthler, a social welfare professor in the Luskin School of Public Affairs, recently released a brief that examines the changes in the number and location of medical marijuana dispensaries in the city of Los Angeles over a seven-year period, from 2007 to 2014.

The brief illuminates the prevalence of medical marijuana dispensaries in the city. This finding, Freisthler said, could have implications on the monitoring of dispensaries.

In 2007, Los Angeles had 187 open and operating dispensaries. In 2012, 476 dispensaries were open and operating, according to researchers. In 2014, there were 418 doing business in the city. Proposition D, which was put on the ballot in 2013 by the Los Angeles City Council, aimed to control and regulate medical marijuana dispensaries and reduce the number of legal dispensaries to 135, down from the estimated 1,600 that existed at the time, according to the ballot proposal. The ordinance also enacts taxing, density and location requirements.

The UCLA research also showed a shift in distribution of dispensaries across the city, moving “from the San Fernando Valley and East L.A. to the South L.A. and San Pedro areas,” Freisthler said. While some neighborhoods saw a decrease in dispensaries, the rate of change in others, including South L.A. and San Pedro, increased more than 250 percent. Researchers have created a map showing the rates of change for L.A. neighborhoods from 2007 to 2014. 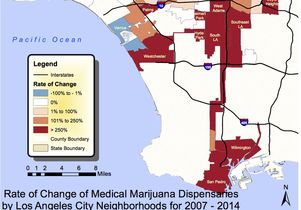 According to Freisthler, the shift in dispensary distribution can be attributed to gang activity in areas like South L.A. where “dispensaries were run out by the gangs. And now gangs are converting parts of their street market to dispensaries.”

The large increase in dispensaries in San Pedro could also be a result of cause and effect, she explained. As dispensaries were being shut down in Long Beach “due to increased enforcement, dispensaries migrated to San Pedro,” Freisthler said.

The study was funded by the National Institute on Drug Abuse and led by Freisthler with co-investigator Paul J. Gruenewald; graduate students Crystal Thomas and Alexis Cooke; and student researcher Alex Creek.

The research team was formed as a way to examine how the emergence of dispensaries change the ecological landscape of the neighborhoods in which they are located, including changes in crime and dependence. The team hopes to provide communities with guidance on regulatory processes that may improve neighborhood problems related to dispensaries.

This story has been adapted from the UCLA Luskin School of Public Affairs website.