Communities near Oroville Dam just got an unenviable front-row seat to what happens when climactic forces and man-made infrastructure clash. It was also a preview of what could happen as California’s climate continues to change.

On Feb. 11, drenching winter rains caused Lake Oroville to overflow onto an unlined, emergency spillway. Erosion that damaged the main spillway and concern over the deteriorating condition of an emergency spillway forced the hurried evacuation of 188,000 people from towns downstream. Crews worked furiously to stem water gushing at 100,000 cubic feet per second — twice its normal rate. The price tag for repairing the damage is estimated at $200 million.

Things could have been much worse. A complete collapse of the spillway would have sent a 30-foot wall of water toward Sacramento, officials warned.

Last weekend marked the first time the emergency spillway was used since the dam was completed in 1968, but it probably won’t be the last. The area is bracing for another round of atmospheric river-driven storms in what has already become a historically rainy wet season.

The crisis may also be a harbinger of California’s long-term climate future, according to UCLA professor Alex Hall, who delivered a lecture on the subject to a packed house at the Fowler Museum last Thursday. His current research predicts temperatures in the Sierra Nevada will rise up to 10 degrees by the end of the century if nothing is done to stem carbon emissions. More precipitation will fall as rain and snow will melt sooner — changes that California’s aging infrastructure is ill-prepared to handle.

“Changes in Sierra water resources may pose the most formidable — perhaps existential — threat” of all climate change effects in the state, Hall said. “The state’s water system is the foundation of contemporary life in California.”

Snowpack in the Sierras currently serves as a natural reservoir, releasing water slowly as it melts. An elaborate system of dams was constructed to collect the runoff, which currently supplies 60 percent of the state’s water.

“The water conveyance system was built haphazardly in an ongoing attempt to satisfy rapidly growing human demands and get around natural limits on water availability,” Hall said. “It is already oversubscribed even if climate were not changing. New, more stringent natural systems are emerging, and the system can clearly not keep functioning as envisioned.”

This year’s rainy season is testing the network’s limits, and elected officials and water and emergency management agencies are paying close attention. On Tuesday, Feb. 14, the Los Angeles County Board of Supervisors ordered inspections of all county dams as what could be the strongest storm of the year bears down on the Southland.

Sandbags and quick fixes might suffice in the short term, but massive feats of science and engineering are needed to prepare the state for a future with global and regional warming.

Hall’s research aims to inform those efforts. He and his fellow researchers have pioneered innovations within a field of climate modeling called downscaling, using large-scale information to make predictions at a local level. Global climate models predict our future climate with numerical computer simulations, but they are not refined enough to show how complex local environments will respond. Using the Hoffman Cluster, a UCLA supercomputer, Hall’s team ran downscaling simulations over the course of several months to make projections and understand how different climate change scenarios could unfold in the Sierra Nevada. 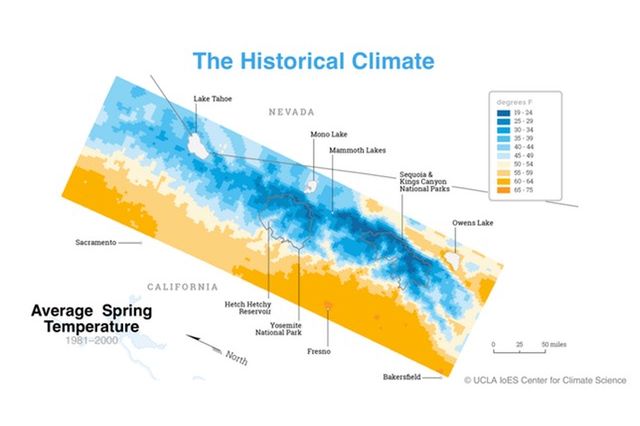 UCLA
Map of the Sierra Nevada shows the average spring temperatures from 1981-2000. 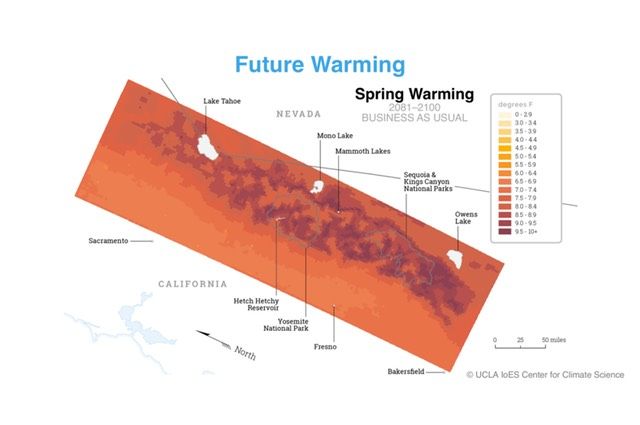 Besides preparing for the worst, people should fight the effects of climate change by joining global efforts to reduce carbon emissions, Hall said. Under a “mitigation” scenario that follows the Paris climate agreement, warming is still projected for the Sierras, but is much less severe.

However, some climate change effects are already being felt. Hall examined Sierra snowpack from 2012 to 2015 — the peak of California’s recent severe drought. Without carbon emissions and a period of warming that stretches back to the start of the industrial revolution, there would have been more snow on the ground.

Hall warned that if we continue with business as usual, “Sierra Nevada and global climate will be unrecognizably different.” How well we are able to adapt to a changing climate “will depend on how much climate change actually occurs, and that will depend on how much fossil fuel ultimately gets dug up and burned.”

From a global perspective, it’s easy to overlook the drastic local impacts of climate change. Heidi Cress, an Oroville resident of 47 years, got a terrifying sneak peek at what may be in store if humans fail to adapt.

“My mouth was dry, and my hands were wet with sweaty palms,” Cress said. “For hours we were told ‘Don’t worry.’ And then someone looked at the hillside and said, ‘Oh, I guess it’s time to worry.’”

Cress offered a reminder of how high the stakes can be.

“They didn’t overreact by evacuating. We would be having a very one-sided conversation otherwise. Corpses don’t talk much.”

This story is posted on the website of the UCLA Institute of the Environment and Sustainability.