Globalization has gotten a bad rap from both sides of the political spectrum, from President Trump as well as Bernie Sanders. So the question of whether globalization has benefited a few elites at the expense of many others, including displaced workers, came up before a panel that included a senior economist with UCLA Anderson Forecast and a UCLA labor law expert Wednesday, March 15.

The lively discourse took place at a Zócalo/UCLA event entitled “Does Globalization Only Serve Elites?”  before a full house gathered at the National Center for the Preservation of Democracy in Little Tokyo in downtown L.A. 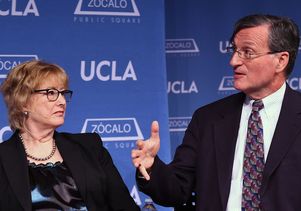 While California has been a winner in the free trade world market in terms of its agricultural exports, gains in technology and location on the Pacific rim in close proximity to Asia, manufacturing centers in the Midwest like Detroit have lost good-paying union jobs.

UCLA senior economist Jerry Nickelsburg pointed out that it’s difficult to differentiate between what’s caused by globalization and what’s the result of other factors, including robotics in the workplace and consumers’ fickle tastes.

But even if you can’t easily measure the effect of globalization, said Katherine Stone, the Arjay and Frances Fearing Miller Distinguished Professor of Law at UCLA, “there are winners and losers, and the losers haven’t been adequately compensated or supported.”

By changing social policies as well as economic programs, these losers could become winners, Stone said. 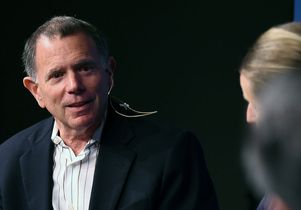 When higher-wage union jobs in places like Detroit disappear, we should not accept as inevitable that workers must settle for low-paid services jobs. “There’s nothing in the nature of the universe that says being a home health aide has to be a bad job,” said the law professor. Offering job retraining and changing labor laws to enhance unionization and collective bargaining could be a solution.

Lifelong education, Nickelsburg said, is “the most critical issue for a globalized world” in order to keep pace with technological advances.

Whoever wins or loses, the panel, which included entrepreneur Kati Suominen and World Trade Center Los Angeles president Stephen Cheung, agreed that the U.S. should not give up on globalization.

“There is no case in the economic history of the world where protectionism has improved the lives of the country,” said Nickelsburg.