When Alain Mabanckou, professor of French and Francophone studies at UCLA and a native of the country of Congo-Brazzaville, was trying to master English, he immersed himself in the collected works of American literary icon James Baldwin.

“He was a prophet,” said Mabanckou, a celebrated author who has been given both the French equivalent of the National Book Award and been decorated as a member of France’s Legion of Honor. In 2007, on the 20th anniversary of Baldwin’s death, Mabanckou published a book about Baldwin, the author and social critic who became his literary inspiration. First published in French to wide acclaim, “Letter to Jimmy” traces Baldwin’s evolution as a thinker and writer and reflects on his enduring cultural and political legacy. 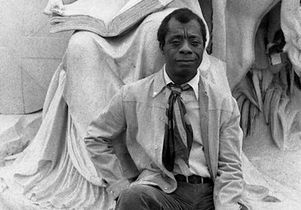 Now available for the first time in English translated by Sara Ansari, who was a student of the author’s at the University of Michigan, Mabanckou’s much-lauded book is a fitting tribute to the pivotal American essayist, activist and playwright, author of the novel, “Go Tell It on the Mountain” and a collection of essays, “Notes of a Native Son” among other major works.

“I learned to sing the song of freedom from African American writers,” Mabanckou wrote in a piece recently published in the Huffington Post. The courage Baldwin demonstrated in his writings made a deep impression on him, he acknowledged. “Baldwin wasn’t hesitating to put his life in danger, to expose himself politically, culturally, sexually,” referring to the author’s openness about his homosexuality decades before it became socially accepted.

Mabanckou, of course, was not the only one who heard the freedom song emanating from the pages of Baldwin’s eloquent testimony. In France, where Mabanckou moved after living in Congo-Brazzaville, Baldwin is regarded as “one of the most respected” American writers, the scholar noted. “You have Baldwin, you have Steinbeck, you have Bukowski, you have Faulkner.”

The authors share more than a literary connection: Both adopted France as their home country. In 1948, “sick and tired of what was happening in the United States,” as Mabanckou tells it, Baldwin moved to France to escape the racially oppressive atmosphere of his native New York. In so doing, Baldwin took his place in a long line of African-American artists and intellectuals who became expatriates — including most famously singer Josephine Baker and author Richard Wright — and found a measure of acceptance and breathing room abroad that they had been denied in their homeland because of their race.

According to Mabanckou, not only did Baldwin “try to reinvent the Harlem Renaissance in France,” keeping company with such American luminaries as Miles Davis and Nina Simone, but he was also deeply engaged in the intellectual life of France. “Jean Paul Sartre, Simone De Beauvoir, Albert Camus, all the prominent writers in France, were his friends.”

In coming to the United States, Mabanckou has, in effect, reversed Baldwin’s migration. The UCLA scholar said he finds it “freeing” to write in the U.S., which he likens to “a secret garden where I can write what I want” without the pressures and distractions of the celebrity he has earned in France.

And just as Baldwin stayed passionately engaged in American issues while living in France, Mabanckou remains a close observer of French life and the fraught relationships between France and the peoples it once colonized.

Mabanckou addresses their troubled entanglement with the mix of compassion and critique that was a Baldwin hallmark. “Europe and Africa avoid the issue of history — or at least stifle their differing views of it — while quietly muttering their respective reproaches behind each other’s backs ... like a couple who hides their incompatibility in public,” Mabanckou writes in “Letter to Jimmy.” “When they run into each other on the street, they hastily gloss over their differences, telling each other they will discuss everything later. But one of them never comes home on time, returning whenever he feels like it, adding to the ever-growing list of infidelities while swearing, on all that is holy, his undying love.”

Like Baldwin, Mabanckou combines an insistence on honesty about the history of racism with a refusal “to see white people as demons,” he said. Baldwin’s classic 1963 diagnosis of America’s ongoing racial crisis in his book, “The Fire Next Time,” unflinchingly decried white American racism, but also courageously criticized the racial nationalism of Elijah Muhammad’s “Nation of Islam.”

Similarly, Mabanckou critiques a France that “sees itself as white, even though it’s become more diverse” at the same time that he voices concern that immigrants in France from former French colonies are too often “crying for the past instead of fighting for the present.”

“The Fire Next Time” is of particular importance to Mabanckou, who devotes an entire chapter of “Letter to Jimmy” to the impact of Baldwin’s seminal piece, which the scholar hails as “without a doubt the most beautiful discourse on brotherhood and of living together in the United States.”

Today, when racial violence and police brutality are dominating the headlines, Mabanckou remains in awe of the book’s relevance over half a century after its publication. “I’m reading a book which was published in the ‘60s, but it’s still in the news,” Mabanckou said in an interview. “It’s like the book was written two weeks ago.”

Asked what role Baldwin would have played in the current debate if he were still alive, Mabanckou said, “He would have been a great voice to make us understand why this country is still facing these crimes where people are dying because of the color of their skin,” adding, “I’m quite sure that he would have won the Nobel Prize!”

Listen to Michael Silverblatt's interview of Mabanckou about his book on KCRW's "Bookworm."