One of the most-read UCLA Newsroom stories for more than a decade is a 12-year-old study by two UCLA economists.

Despite the frenetic pace of news today, the study by UCLA economics professor Lee Ohanian and Harold Cole, now a professor at the University of Pennsylvania, continues to draw attention across the political spectrum.

In 2004, Ohanian and Cole opened a Pandora’s box when they released a painstakingly researched study that revealed how some of the policies of venerated President Franklin D. Roosevelt actually lengthened the Great Depression by an estimated seven years.

Their research cast a negative light on the historically vaunted Depression-era policies of the FDR administration and caused a furor at the time of the study’s release.

After a period of excitement triggered by the initial release, interest in the story waned. It started to build again around 2008, thanks to links by conservative blogs and Reddit groups when President Barack Obama took office amid the Great Recession.

Curiously, Cole and Ohanian’s research is often seized upon by both liberals and conservatives to bolster their arguments in an increasingly polarized political climate. But neither side gets it right, Ohanian said, reflecting on the research that has taken on a life of its own.

“People on the right would say, ‘Hey, look — these guys from UCLA — which is not perceived as some traditionally conservative place — said Roosevelt was to blame for the Depression continuing,’” Ohanian said. “Then people on the left would say, ‘Oh, these guys are conservative, paid mouthpieces for the Koch Foundation,’ which, of course, we were not. But neither side really understands what we did. “ 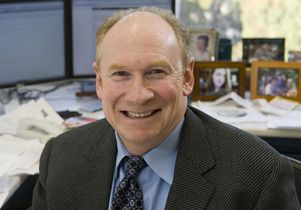 In fact, casual readers frequently make assumptions — most of them incorrect — about the authors’ politics, Ohanian said. While the UCLA economist said he is decidedly apolitical, aligning himself with neither party’s overarching ideology, he said jokingly, “I’m pretty sure Hal voted for Obama, at least the first time.”

On some level, there’s no way to really understand the complicated research model used in the study without being a professional economist, Ohanian said, adding that media coverage over the years has not helped the case, with reporters perpetuating factual inaccuracies.

In the original study, Ohanian and Cole examined what might have happened if FDR’s National Industrial Recovery Act of 1933 (NIRA) was never enacted. The act allowed unions to bargain for increased wages that reached unsustainable levels and effectively allowed for a cartel economy — promising companies that they could establish monopolies and artificially inflate prices without fear of anti-trust prosecution.

Though NIRA was deemed unconstitutional after just two years, the FDR administration still gave tacit approval to monopolies for at least four more years, bringing relatively few antitrust cases against businesses engaging in price-fixing. This reduced competition kept real income and output 14 percent lower than it otherwise would have been, Ohanian and Cole's study maintains.

Over the years, Ohanian has received hundreds of emails in reaction to the study, including requests asking him to speak at churches in Appalachia, to lecture to conservative groups and participate as a moderator in debates. In appreciation of his research, one family told him they intended to name a grandchild after him.

“I’ve also gotten things from people saying, ‘How can you besmirch the name of Franklin Roosevelt, the greatest president in the history of the United States?’” Ohanian said. “Both extremes totally miss the point of what we were talking about.”

Roosevelt himself had a bit of an about-face in the late ’30s, Ohanian said.

“He gave a speech where he said our economy has become a concealed cartel economy like Europe’s,” Ohanian said. “NIRA, which was the centerpiece of his economic recovery program — whether he intended it that way or not — did promote and foster cartels, and so his policies began to change a lot in the late ’30s.”

Ohanian and Cole’s research focused primarily on the impact of Roosevelt’s early policies that allowed for monopolies and too much union power to increase prices and salaries. Roosevelt did institute other policies that helped the economic recovery, like stabilizing the banking system and creating unemployment insurance and Social Security, Ohanian explained.

The ongoing attention is understandable to a degree, said the economist. The Depression remains an emotional topic, he said. So many families have difficult memories of the long-lasting malaise that America endured.

“My dad was born and grew up in the Depression, and he told these terrible stories of how his family suffered,” Ohanian said. “You’d look in his face, and there was so much pain.”

Ohanian’s interest in the Great Depression can be traced back to his time as a Ph.D. student at the University of Rochester, but he was discouraged from pursuing it by his professors and mentors at the time.

“All of my faculty advisors — who were terrific economists — told me it was way too difficult; no one understands it. You probably won’t crack it, and for a young person to try to do it … it’s just way too risky,” he said. “One faculty member told me, ‘Wait until you get tenure; that’s what tenure is for — to take these big intellectual risks.”

Rather than rest on their laurels, Ohanian and Cole are probing even deeper into the topic, working on a book tentatively titled “Troubling Times.” They plan to track the history of the American economy from the 1920s through World War II.

“It will be a lot of fun,” Ohanian said. “And we probably will get people riled up all over again.”