Donald Shoup, distinguished professor of urban planning in the Luskin School of Public Affairs, has become the nation’s oft-quoted, go-to expert on parking. He was recently named one of the world's Top 100 City Innovators Worldwide by UBM Future Cities. The author of “The High Cost of Free Parking,” Shoup has inspired a growing number of cities to charge fair market prices for on-street parking and remove off-street parking requirements.

He recently sat down with Matt Hurst, a writer at the Luskin School, to talk briefly about his favorite subject. Here is an edited Q&A.

​How did you get interested in parking?
I backed in. I wrote my Ph.D. dissertation on land economics, and have always been interested in how cities use land. Few academics had studied parking as a land use, perhaps because it has such low status. In academia, international affairs have the most prestige, national affairs are a step down, state government is even lower, and local government seems parochial. Then, within local government, parking is probably the lowest rung on the status ladder. So I was a bottom feeder, but there was a lot of food down there.

Why is parking an important land use?
In most cities, the footprint of parking is bigger than the footprint of any other land use. Parking spaces are also the most uniform and most frequently rented pieces of land on earth. People are even conceived in parked cars. 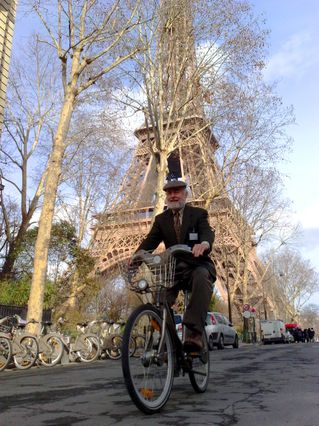 Donald Shoup, who rides a bike to work, tries out a Velib bike in Paris.

I have estimated that cruising for underpriced curb parking on the 15 blocks in Westwood Village in Los Angeles creates about 950,000 vehicle miles of unnecessary travel per year. That’s equivalent to 38 trips around the earth or four trips to the moon.  And here’s an inconvenient truth about underpriced curb parking: cruising those 950,000 miles per year in Westwood wastes 47,000 gallons of gasoline and produces 730 tons of carbon dioxide per year. If all this happens in one small business district, imagine the cumulative effect of cruising for underpriced curb parking in all the world’s cities. The right price for curb parking is the lowest price that will create one or two open spaces on every block. If curb parking is underpriced and overcrowded, cruising in search of an open curb space creates a lot of traffic. It’s hard to know how much traffic is cruising for parking, but I have a simple test. Where traffic is congested and all the curb spaces are occupied, I walk to the driver’s side door of a car parked on the street and take keys out of my pocket.  Often, the first driver who sees me approach the car comes to a halt, implying the driver was hunting for curb parking. If the first driver who sees me usually stops to take the space, many other drivers in the traffic flow are probably also cruising for parking.

Why do you think cities should remove off-street parking requirements?So drivers won’t mind paying to use these small pieces of land over and over again?
No one wants to pay for curb parking, including me. To overcome this unwillingness to pay, the second policy I recommend is to return the parking meter revenue to pay for added public services on the metered streets, as Pasadena and some other cities do. Residents and businesses can then see their meter money at work, improving their neighborhood. Cities are discovering that using meter revenue to finance local public investments on the metered streets can create the political will to charge for curb parking.

The third policy I recommend is to remove minimum parking requirements, which are a fertility drug for cars in cities already choking on traffic congestion. This doesn’t mean, however, that developers won’t provide off-street parking. It simply means that urban planners won’t tell developers exactly how many parking spaces they must provide before they can get a building permit. Developers will provide the parking spaces they think buyers demand. Lenders will also insist on enough parking spaces in the buildings they finance.

I think minimum parking requirements will eventually join other discarded planning practices, like urban renewal programs in the 1960s, that wasted a lot of money and did a lot of harm, although they seemed a good idea at the time.

What do you think about the state of planning for parking in our cities?
Planning for parking is at a primitive stage, maybe where medicine was a hundred years ago, when doctors prescribed lead and mercury as medicines, and blood letting as a therapy. Looking back a hundred years from now, I think everyone will understand that mispriced on-street parking and misguided off-street parking requirements did immense damage to cities, the economy, and the environment.

Your book has triggered a rethinking about how parking should be planned. How do you feel about that?
I try to write clearly so readers will think, “He’s right. Let’s do it!” My ideas for parking reform once seemed unimportant or impossible, but cities are now implementing them. I hope they work.

This Q&A was adapted from an article from in the Winter 2014 issue of the Luskin Forum, a publication of UCLA’s Luskin School of Public Affairs.