UCLA history professor Joan Waugh is one of the country’s pre-eminent scholars on American history in the latter half of the 19th century and in particular the Civil War. She’s also a lifelong baseball fan who during her class “United States History 1865–1900,” spends one lecture focused on how baseball became American’s national pastime. On, Sept. 21, C-SPAN aired a recording of Waugh telling the story of baseball from the 1840s to 1900, emphasizing its establishment as a sport and as a business. The broadcast is on baseball but the context is that its growth mirrored that of the country as a whole during the “Gilded Age,” reflecting its strengths and drawbacks.

You’re widely known as an authority on the Civil War and Reconstruction, so when did you get into baseball and in particular baseball history?
That’s easy! Baseball (and sports) is part of our country’s social, economic and cultural history. In the 19th century, baseball went from being a boy’s game in the 1830s (from the English sport, “rounders”) to a popular amateur “manly” sport by the late 1850s. Many thousands of soldiers on both sides of the American Civil War played baseball in their camps, and brought their enthusiasm home with them. It is no accident that after the war, baseball became professionalized, with the Cincinnati Red Stockings becoming the first team to place all their players under contract in 1869. The rise of baseball to its status as “America’s Pastime,” occurred in the decades after the Civil War, and its modernization paralleled, the rise of big business in the Gilded Age.

Thinking both as a sport and also as an industry, how does baseball back then compare to baseball now?
Although the rules, the uniforms and the composition of bats and balls have changed over the years, I believe that most fans would recognize the game as it was played in the 1890s. (Although today’s emphasis on the home run was lacking back in the day!) However there are three changes I would point out that are worth noting. 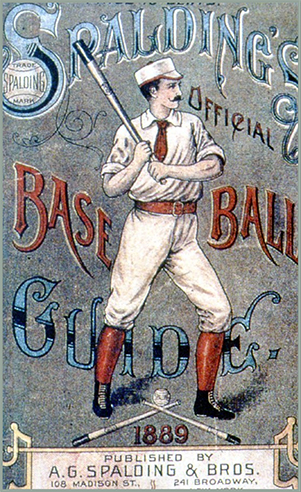 A.G. (Albert Goodwill) Spaulding, one of the founders of professional baseball, published magazines fans could buy to follow their favorite teams.

Diversity. Then: Baseball reflected the society as it was at the time. Players hailed from the rural areas, but many were also recent immigrants — especially Irish and German, attracting a huge fan base from those communities. The widespread racism of a country that accepted Jim Crow laws prevented talented African American baseball players from participating in professional baseball. White players simply walked off the field, refusing to play with them. Shut out, black players and entrepreneurs formed their own successful leagues.

Now: When UCLA’s Jackie Robinson broke the color line in 1947 with the help of the Brooklyn Dodgers’ Branch Rickey, baseball entered a new era. From the 1950s onwards, baseball welcomed African American players, but also recruits from Cuba, the Dominican Republic, Asia and Latin America. Baseball now is truly a global sport.

Player control of their careers. Then: The introduction of the reserve labor clause and its insertion into every player’s contract beginning in 1879 made baseball players employees subject to the power of the owner of their baseball club. It meant they could not make a better deal for themselves by moving to another team; they could not be “free agents.” It enraged the players, and they responded by forming a union. Led by a Columbia-educated shortstop named John Montgomery Ward (New York Giants), the National Brotherhood of Professional Baseball Players mounted a strike that was crushed by the owners.

Now: In 1969, St. Louis Cardinal Curt Flood challenged the reserve clause. His courageous action sparked a revolution in the balance of power in baseball, extending to other sports as well. By 1975 the reserve clause was dead and every baseball player a free agent. The players’ union’s power rose as did the role of sports agents in negotiating contracts, and of course, star players now command huge salaries for their services.

Status in American culture. Then: Baseball was “America’s Pastime”

Now: Baseball is a distant second to the NFL and college football in television ratings. To me, baseball will always be the national game. 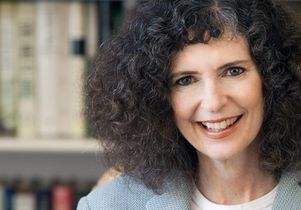 Diana Lundin
To give the classroom a ballpark feel, Waugh tosses peanuts vendor-style to her students toward the end of the lecture.

​Baseball as a professional sport has the longest history in the United States, but back then were there other sports or activities that baseball was in competition with, that had things happened differently could have become our national pastime instead?
Overall the Gilded Age saw the rise of what some people have called “sports-mania.” Not only baseball but also boxing (really popular throughout 19th century,) college football, basketball was invented, and other sporting activities such as croquet, polo, tennis, golf, swimming and bicycling. Baseball’s rise to “the national pastime” came for many reasons but several elements stand out: brilliant entrepreneurs and promoters — such as Henry Chadwick and Albert Goodwill Spaulding; a built in fan base from the 1850s and the Civil War — that drew on, and increased attendance from both working-class and the growing middle class base; a great game with popular stars — such as Mike Kelly and John Montgomery Ward.

What does studying that time period of baseball history reveal to us about American history? During this period of time the American economy began shifting from agrarian to more industrial and the population began migrating to urban areas, so was the growth of baseball as a leisure activity tied to the fact that Americans had more leisure time, period, and we had population centers that could field teams?
The owners, (including Spaulding, owner of the Chicago White Stockings) of the most popular teams founded the National League in the 1876. The major intent of this organization was to capitalize on baseball’s growing popularity by controlling the players, establishing uniform rules and regulations, and promoting a national championship. In doing so, baseball became a big business, and like Andrew Carnegie in the steel industry or John D. Rockefeller in oil, the league brought down their costs and made their product cheap and desirable. The rise in productivity led to an uneven but surging economy that meant more money in the pockets of the working class and the middle class. Leisure opportunities expanded dramatically and included department stores and amusement parks as well as sports. 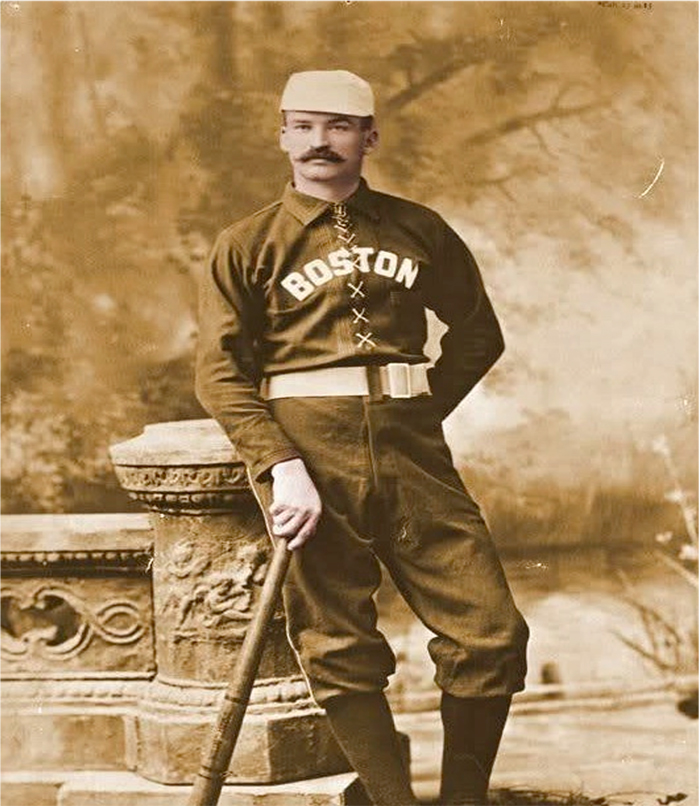 Mike “King” Kelly was the first major baseball star of the professional age.

Do you do anything special as a teacher when teaching about baseball history?
Yes, along with a power point presentation throughout, I play old time baseball tunes as the students are walking into the class, starting with “Take me out to the Ball Game.” I also play a song mid-lecture, “Slide, Kelly, Slide” to illustrate the fame of the first major baseball star of the professional age, Mike “King” Kelly. Kelly played for the Chicago White Stockings and the Boston Red Stockings in the 1880s, and was an amazing personality and athlete. At the end of my lecture, I explain how the infrastructure of professional baseball emerged in full force by the late 1890s – the stadiums, the double-headers, the appeal to the widest possible base of fans, etc.

But then I conclude with how much has changed, but some things have remained the same in 2015 as they were in 1899. When fans today want a bag of peanuts, they still alert the passing food vendor by signaling with their hand how many bags they want, and before the vendor throws the peanuts, he yells, heads-up! And that’s how I end the lecture, calling out “heads-up” and, then to the sounds of the tune “Centerfield” by John Fogerty, I throw bags of peanuts to the audience. It’s something I’ve been doing for many years, and always a (funny) surprise for the most of the students.

Do you have a favorite baseball team?
Yes, the Los Angeles Dodgers! I grew up playing baseball (mostly first base) in neighborhood games and in school, and attending many if not most of my brothers’ little league games. My family was sports-obsessed, and we attended games at beautiful Dodger stadium on a regular basis. Although I appreciate the history of the Brooklyn Dodgers, I was lucky to enjoy the great teams featuring Sandy Koufax, Don Drysdale, Maury Wills, Davy Lopes, Ron Cey, Steve Garvey, Fernando Valenzuela and Orel Hershiser. I am still a big fan, and cherish that we still hear Vin Scully calling the games after all those years as the Dodger announcer. I also am a fan of the UCLA baseball team that plays at Jackie Robinson stadium, and won the 2013 NCAA Championship.