Long after UCLA students left Schoenberg Hall for the day during winter 2015, Supeena Insee Adler was still working well into the night there, repairing old Thai musical instruments — some of them broken — that had been left unused, covered with cobwebs and forgotten since 1985.

In 2014, Adler, a classical Thai musician and instrument repairer in San Diego, was given the mission of bringing about 40 of these instruments back to life by Helen Rees, professor of ethnomusicology at UCLA and director of its vast world music instrument collection. “Enough is enough,” Rees had said. At her request, the department earmarked $8,000 to have Adler come to UCLA to restore them.

That was the beginning of a successful project that has not only given the instruments back their voices and provided students access to them for classroom use and concerts, but has also built a strong bond between UCLA’s ethnomusicology department in the UCLA Herb Alpert School of Music and the Thai community in Los Angeles and Thailand. Last month, to express their appreciation and build upon the goodwill generated by the project, Rees, Adler, and archivist Aaron Bittel from UCLA’s ethnomusicology department traveled to Thailand to speak at a music symposium about the project and the department’s extensive archive of world music.

“One of the most rewarding aspects of this project has been the way it has renewed 60-year-old ties between UCLA ethnomusicology and Thai classical musicians and scholars of the Luang Praditphairoh Thai Music Foundation in Bangkok,” said Rees. “It has also created new ties with the Thai and Thai-American community in Southern California.” 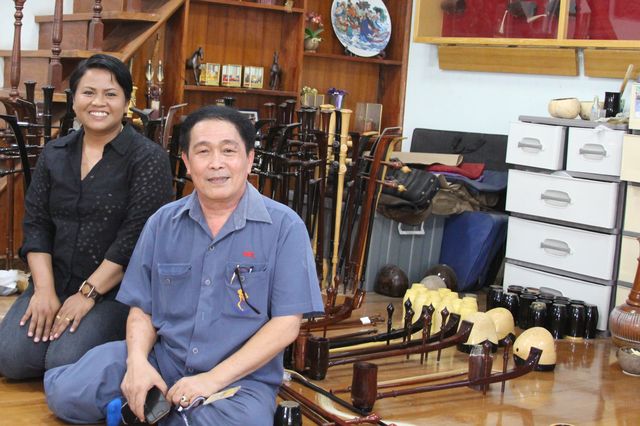 Adler traveled to Thailand to meet with well-known fiddle maker Mannoch Phudphong from the Baan Sau Bangprakong company in Southeast Thailand, among others. Four fiddles were purchased for UCLA.

Repairing the instruments took Adler 95 hours over February and March of 2015. Before the work could even start, she spent more than a month in Thailand talking to scholars and musicians to get their support, hunting down difficult-to-find supplies and seeking the advice of instrument makers. She negotiated prices for special wax for xylophones, leather strips, strings, mallets and even a new set of drums.

When the instruments were finally restored last year, the department hosted an evening of well-attended talks and performances by 10 Thai classical musicians before an enthusiastic audience. The event was highlighted in local Thai-language media.

The project has won widespread support both in Southern California and Thailand. In Bangkok, the Luang Praditphairoh Thai Music Foundation helped the department obtain more string and wind instruments, including two hammered dulcimers, a coconut shell fiddle, a three-string Thai zither and a vertical wooden flute. Support also came from the Royal Thai Embassy, with assistance from the Royal Thai Consulate in Los Angeles. The embassy donated funds for the department to purchase new Thai instruments for the collection so that UCLA could offer a course in Thai music. And the Thai Community Arts and Culture Center of Los Angeles contributed money so that a Thai music performance course will be taught in the upcoming fall quarter by Adler, who is now a lecturer at the university. 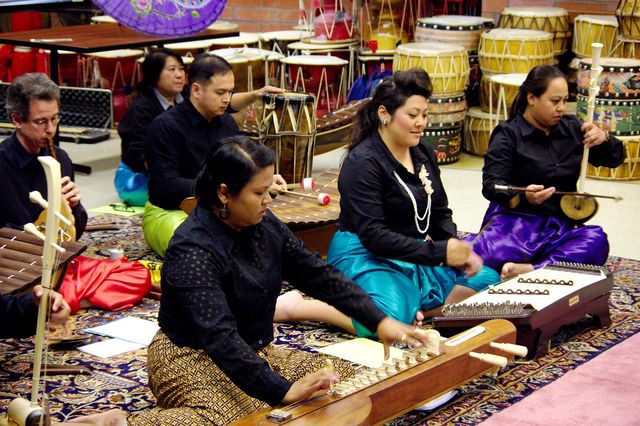 UCLA
An ensemble on locally based musicians plays instruments that were purchased new or restored for the UCLA world music instrument collection.

Last spring, the new and restored instruments were used by students in Adler’s class “Music of Thailand and Laos.” And a newly reinstituted Music of Thailand Ensemble will start up this fall under her direction. UCLA now may have one of the best such sets to exist outside of Thailand, said Bittel.

On their goodwill visit last month, Rees, Bittel and Adler gave the Thai foundation a cultural treasure to express their gratitude: digital recordings of Thai traditional music made from audio recordings by the late UCLA music professor David Morton, the first Western scholar to undertake a serious study of Thai classical music and the scholar who bought the original set of instruments for UCLA between 1960 and 1969.

“The recordings are important for scholars who want to learn about Thai music because they are a time capsule of what the music at that time would have been,” said Bittel, whose audio engineer colleague David Martinelli spent nine months digitizing more than 100 tapes in Morton’s collection. “Imagine having everything Mozart has ever written on a recording right at your fingertips.”

The recordings contain the repertory of Luang Praditphairoh, the most renowned Thai court musician of the early 20th century, whose son, the famous composer Prasidh Silapabanleng, worked closely with Morton as he pursued his dissertation research.

Morton’s recordings represent a significant facet of Thai music history, Adler said. “Many people at the foundation have not heard the recordings that David Morton made of their older relatives’ playing.”

Morton was known for his expertise on the ranat ek, a boat-shaped percussion instrument. Adler plays all the instruments, and, in particular, has mastered the jakhee — a three-stringed zither, shaped like a crocodile.

“I hope the revival of the ensemble and restoration of the instruments will encourage more students to learn about Thai music and archival history,” Adler said.