Research is an essential function of the modern university. UCLA has a research budget of more than $1 billion per year, the sixth highest among all U.S. universities. Over the last three years, this amount has increased significantly, topping $1.4 billion last year.

The vast majority of research money is spent in the fields of science, technology, engineering and math (STEM) to develop vaccines and robots as well as break new ground in agriculture, atmospheric science and other fields.

Although the arts and humanities historically receive considerably less research funding than the STEM fields, they are just as vital to UCLA’s research environment, said Roger Wakimoto, UCLA’s vice chancellor for research and creative activities.

Wakimoto estimates that he splits his time evenly between south campus (home to UCLA’s science, engineering and medicine programs) and north campus (where most of the arts, humanities and social science programs are located).

The arts and humanities expand our knowledge and understanding of the world in many ways, from creating 3D-printed sculptures and digital art with custom software to developing new forms of dance, film, music, theater and performance. Arts-related forms of research can include experimenting with paints, ceramic glazes, darkroom techniques or building materials.

As testament to that, when Wakimoto became the head of the UCLA Office of Research in 2017, he went on a listening tour. Deans and department chairs of schools that focus on the arts, humanities and the so-called “soft sciences” told him that the term “research,” as it is typically understood, doesn’t fully capture the work of their faculty and students, he said.

With no fanfare or message to campus, Wakimoto renamed his position “vice chancellor for research and creative activities.”

News of the name change “really did spread like wildfire,” he said, with thank-you messages coming in from non-STEM research faculty and students. “I want to be responsive to everyone on campus, and I think it was the right thing to do.”

Earlier this year, the UCLA Office of Research and Creative Activities partnered with the Chancellor’s Council on the Arts to reenvision the Chancellor’s Arts Initiative, a seed-funding grant program that supports faculty members’ arts-based research. As announced today, this year’s grant funding supports 12 UCLA faculty research projects that range in scope from an exhibition spotlighting Black music in Los Angeles to documenting underrepresented voices of American Indian activism.

Selected projects advance arts-related research and increase public awareness of the arts at UCLA. Priority was given to projects that contribute to the university’s larger commitments to sustainability, anti-racism, equity, diversity and inclusion. After receiving a significant response and based on the strength of the submissions, Wakimoto’s office increased the funding from $100,000 to $150,000.

Interdisciplinary collaboration is “not only the right thing to do, but it also produces the best results,” he said.

UCLA’s research budget helps support graduate students and postdoctoral fellows, underwrites travel expenses, buys new equipment and materials, and helps with ongoing laboratory and studio costs. As COVID-19 spread in 2020, much of that research ground to a halt. Working in close coordination with the Los Angeles County Department of Public Health, UCLA allowed some projects to continue, specifically those related to the novel coronavirus and yearslong projects that would have been invalidated if paused. Research has since crept back up to 50% personnel density and will continue to ramp up as public health restrictions are eased.

The arts and humanities still make up only a small fraction of UCLA’s research budget, but Wakimoto pushed back on the idea that money raised for research is correlated to the value of that research.

“I don’t think you need to bring in bags of money to be highly successful at UCLA,” he said.

Another priority for Wakimoto has been to support diversity initiatives in research. His office provided additional funding to the chancellor’s postdoctoral fellowship program, specifically targeted to underrepresented groups; created seed funding opportunities for racial and social justice initiatives; and sought out partnerships with historically Black colleges and universities.

“We have to serve everybody. It’s wrong to serve just a small segment of our community,” he said. “If we serve everybody, it leads to a better outcome, and we will do better research.”

As a third-generation Asian American from California, Wakimoto is personally affected by the rising number of hate crimes against members of the Asian American Pacific Islander community.

“I’m a person of color. I’ve faced discrimination,” he said. “My parents were interned in camps — I call them ‘concentration camps’ — during World War II.” As a result, striving toward diversity and inclusion in research is critical to his mission at UCLA. “It’s just very natural for me to advocate, promote and contribute to this.”

An accomplished atmospheric scientist, Wakimoto has been a member of the UCLA atmospheric sciences faculty for more than two decades, with a focus on severe weather and tornadoes. He regularly travels to the Midwest to chase storms in a radar truck, fly near them in research aircraft or fly in smaller aircraft to do damage surveys in the aftermath of storms. He likes to joke that people who meet him would never guess that he’s a tornado researcher. 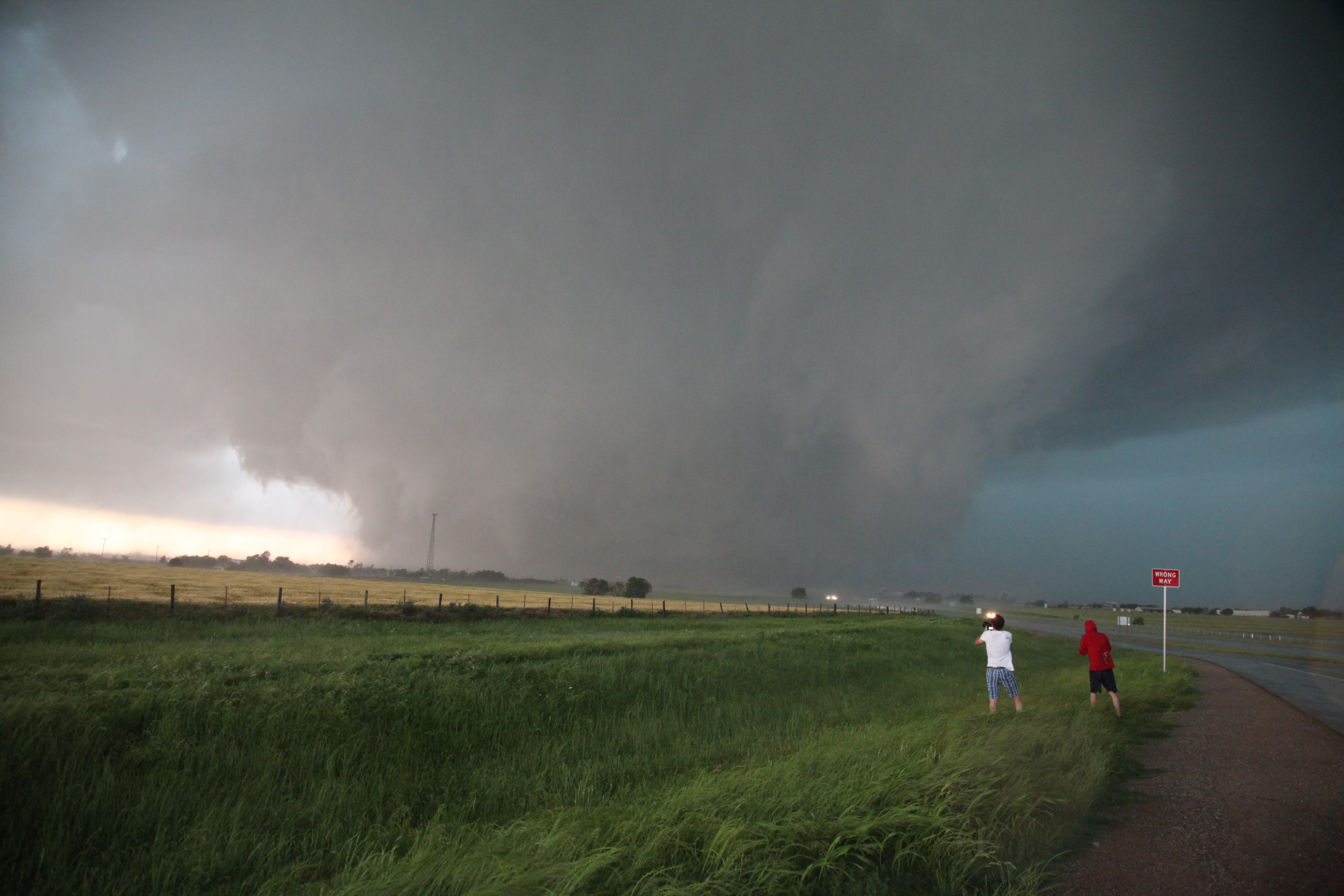 Courtesy of Roger Wakimoto
Photo taken by Roger Wakimoto in 2013 of a tornado near El Reno, Oklahoma. The tornado funnel is about half a mile wide and about 1.5 miles away from Wakimoto’s location.

Wakimoto also likes to photograph tornadoes from close range, usually just a mile or two away.

“Tornadoes come in all different shapes and sizes. And sometimes, when people come over to our house and look at some of the photographs that are on the wall, it doesn’t matter if you’re a scientist or in arts and architecture or humanities, they stop and say, ‘Wow, this is an incredible picture. I could study it forever and look at all the little details that are in there.’ So just from that alone, I would say that it’s my contribution to creative activities,” he said.

Seeing tornadoes up close is awe-inspiring, Wakimoto adds. “It takes all my willpower not to let the camera fall and just stand there with my jaw open at the tornadic event,” he said.

However, if a tornado ever were to change course and rush toward him, Wakimoto always has several escape routes. His very patient wife of more than 40 years is eager for him to retire from going out in the field. But observing storms and their aftermath up close, he said, “is the reason I chose this discipline. It’s hard to walk away until I truly retire.”