It was a classic, weird California story with an El Niño twist: Surfer finds yellow-bellied sea snake on a Ventura County beach. Two more such sea snakes have been found on Southern California beaches since last October, when a surfer from Oxnard found the first documented occurrence of the species (Pelamis platura) in California waters since 1972. (That year, like 2015-16, was also a strong El Niño year.) 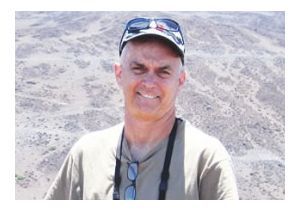 Brad Shaffer, director of the UCLA La Kretz Center for California Conservation Science in the Institute of the Environment and Sustainability (IoES), was deeply involved in the rapid-response “rescue” of the sea snake for science. It was alive when it was found on the beach, but died later.

In a world of rapid climate change where such unusual occurrences are likely to become more common, the encounter between sea snake and surfer illustrates the important role of the public in reporting and recording such data.

The connections between the general public and scientists are only going to become more important, according to Shaffer, UCLA Distinguished Professor in the IoES and Department of Ecology and Evolutionary Biology.

UCLA Newsroom recently asked Shaffer about why climate change makes it even more urgent to strengthen citizen science programs and connect them to established scientific networks.

You were one of the first scientists to get the call that a sea snake had been reported in Ventura County. How did the surfer know it was important?

Science was very, very lucky that Bob Forbes was on the beach that day. He’s surfed all over the world, including tropical places where these sea snakes are common. He knew it was potentially dangerous. He also knew it was really weird to find one on a beach in California.

I’m not sure how — but he got it into a bucket before the tide could carry it back out or a gull could eat it. He took it home, but then he really didn’t know what to do with it.

How did you first learn of it?

We were lucky that Bob was connected enough to get that first call out to an animal rescue person up in Santa Barbara County, who called a reptile expert with the U.S. Navy down in San Diego, who called me.

So much of citizen science is virtual — images that you can submit or click on. Are they worthless?

I’m not discounting the value of that at all. The websites, iNaturalist, eBird and RASCals here in California are all very important. You can take a picture and post it to these sites, and that will eventually bring it to the attention of whoever runs the citizen science program. But those citizen scientists won’t necessarily work quickly enough to get that specimen into a museum.

So what kind of citizen science do we need in an era of climate change?

We need people to be aware of the possibilities of what they might be seeing, and then we can help them know how to engage an established scientific network if they see something unusual. And we need to help them do it quickly before the opportunity to collect a specimen, a piece of information or a measurement is lost.

Under climate change, we're going to see a more northerly push of warm water, and presumably that means different elements of the flora and fauna are going to be tracking and moving with that warm water, including things like sea snakes. As these events occur, we really want to have a [more direct] way for a citizen scientist … to get to someone who can immediately determine whether it's important enough to secure that specimen and get it into a museum.

To do that, you need a really fast reaction time. I think we need more networks like the La Kretz League at the La Kretz Center.

The league is a group of people who are interested in the outdoors and natural history. They all have my phone number. They all have my e-mail. They all know me. They know graduate students and other faculty here at UCLA. The more we can advertise, promote and create those kinds of networks from the community and connect them to scientific networks, the better our response time and our ability to document the weird!

So be on the lookout for more natural weirdness?

Yes. Maybe we should develop a most-wanted list of species. Here’s what we expect you might see. And here’s the number to call if you see it. And we need to make it easier for you to call us from the woods or your yard or the beach, because it’s really not a good idea to collect a yellow-bellied sea snake in a bucket and take it home to your garage.

I’m glad Bob Forbes did it. But there should be a better way.

This Q&A was edited from one posted on the IOES website. To learn more about the yellow-bellied sea snake, see this video by the Museum of Natural History.