The entrepreneurial spirit is nothing new at UCLA Anderson. Among the many opportunities available to M.B.A students with innovative ideas is a chance to start or plan their own company while still in school through the Business Creation Option of the Applied Management Research field study project.

In truth, Alex Gostomelsky’s entrepreneurial journey started long before he took advantage of that particular launch pad for startups at Anderson.

It was May 2, 2011, and Gostomelsky was scrolling through Twitter trying to find out why major news sources were halting their regular evening newscasts for a special message from the White House. After a long search, he finally happened upon a tweet from a mid-tier news source that claimed Osama bin Laden had been shot in a raid led by the United States.

After hearing the breaking news, Gostomelsky had another thought: Why did it take so long for him to find a tweet that had high engagement rates and should have been one of the first tweets he saw on his feed?

It was this question that led him to create Nopical, a news aggregation website that allows users to build custom news feeds based on their interests. Gostomelsky wanted to provide a platform for users that took out all the legwork so that people could follow top stories on different subjects without having to follow all news sources or scroll through thousands of tweets to get the most relevant information.

Of course, the path isn’t easy for any startup to get its footing in the industry. After enrolling at UCLA Anderson, Gostomelsky utilized the wide range of opportunities at his disposal to further develop Nopical.

First, joining the Startup UCLA's summer accelerator program in 2016 gave him direct access to workspaces and put him in touch with other entrepreneurs and investors after participating in a 10-week program designed to nurture early-stage companies. He credits UCLA Anderson and its curriculum with providing him with the framework to succeed. “Business school frames you as a better critical thinker, and that has been the biggest benefit,” he says. 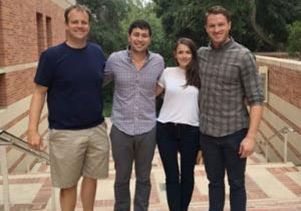 This spring, Gostomelsky became one of two M.B.A. student directors who guided the progress of teams working in the Anderson Venture Accelerator, a 10,000-square-foot, wireless-equipped incubator for nascent UCLA startups. This on-campus space, where as many as 45 people can work at a time, enables vital collaborations among entrepreneurs, researchers and students across disciplines.

Nopical’s success has not gone unnoticed. Gostomelsky has competed in business planning competitions at Oregon, Princeton and Baylor, where he was a semifinalist. In 2016, he received the Larry Wolfen Entrepreneurial Spirit Award, a fellowship administered by the Price Center for Entrepreneurship and Innovation that provides M.B.A. students with a stipend for living expenses while they pursue their entrepreneurial projects.

Currently, Gostomelsky is focusing on two goals: redesigning Nopical’s website and building up the user base. He is incorporating more image-based content that blends in with text-based format but does not overpower it. This redesign is intended to attract more users to the website and appeal to advertisers. Gostomelsky considers the technology interesting enough for someone to purchase and, although his vision for Nopical is much greater, he is open to seeking a buyer within the next few years.

But Nopical will not be the last venture for the young entrepreneur. Reflecting on his six-year journey to get his first company where it is today, Gostomelsky has some words of wisdom for aspiring entrepreneurs: “You build your first startup to make all the mistakes. And then once you do that, the next startup you do — you’re ready to go.”

This story has been adapted from one posted on the UCLA Anderson website.