Last month, a motley crew of college students from UCLA and Cameroon left modern-day conveniences behind and plunged into the rainforest. Their objective: to reopen a remote field station that had been shuttered for two decades and take the pulse of local wildlife.

Through their efforts and UCLA’s Congo Basin Institute, the Bouamir research station is again open for business — welcoming researchers from around the globe who want to learn about the diverse life in the Dja Reserve, a rainforest sanctuary in south-central Cameroon.

As the students traveled from the capital city of Yaoundé to their destination, local Baka and Bantu villagers greeted them with dancing and celebrations. The fun quickly gave way to hard work as they confronted the realities of doing field research in a jungle. The station itself is 18 miles from the nearest village, so getting there required a daylong hike. Then, starting at dawn each day, the students conducted field work at a primitive site that no one would confuse with the Ritz-Carlton: The latrine was a simple hole in the ground. To bathe, they went to a creek with buckets.

For someone used to measuring hikes in terms of Pokémon Go rewards, it was challenging, UCLA student Emily Chen admitted.

“The first few days, my mentality was just trying to make it through,” Chen said. “Then I embraced it.”

The students conducted wildlife surveys, researched butterflies and compared local birds they studied to other populations in Africa. The work was part of a Field Biology Quarter class offered by UCLA’s Department of Ecology and Evolutionary Biology and taught by professors Greg Grether and Tom Smith. Their efforts paid off in surprising good news: Despite a growing market for bush meat and other threats to biodiversity, most species in the reserve appeared to be thriving.

During the 1990s, biologists, using the Bouamir station as their research headquarters, published nearly 50 papers on the region’s rich biodiversity that includes forest elephants, hornbills, endangered western lowland gorillas, chimpanzees and pangolin. Smith, director of the Congo Basin Institute and a professor with UCLA’s Institute of the Environment and Sustainability, was one of those early researchers. “We lived right in the middle of [the reserve] for eight years,” Smith said. “It was fabulous.” 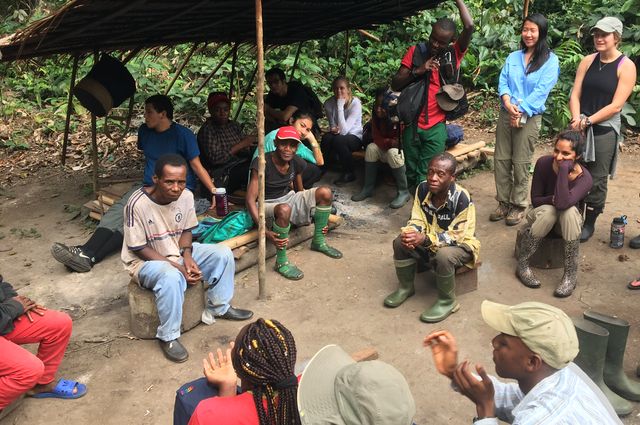 Unfortunately, the nongovernmental organization that provided logistical support for the researchers went belly-up, and the site, which was not under the purview of UCLA at that time, was abandoned. It was a big loss for the scientific community as well as a potential threat to local wildlife — the constant presence of scientists was a powerful deterrent against would-be poachers.

But, Smith said, “It just got too difficult to maintain.” When he launched the Congo Basin Institute as a regional base for scientific research and education through his Center for Tropical Research, part of the IoES, he said, “We decided that one of the things we wanted to do ... was re-establish this station.”

The reopening of Bouamir falls in line with the institute's broader goals. The basin of the Congo River in west central Africa has long suffered from brain drain, leaving it without the human resources it needs to confront major problems, such as food insecurity, infectious disease outbreaks and the effects of climate change. The institute aims to change that, and the first step, Smith said, is to retain scientists by giving them proper facilities and support to do their work.

In addition to the new field station, the institute has modernized its research facilities in Yaoundé with laboratories for remote genetics, a geographic information system, remote sensing, as well as analytics labs for water, soil, plant tissue, entomology and pathology.

The institute also helps visiting scholars navigate a complex web of local and national governments. Institute biologist Kevin Njabo, who grew up in Cameroon, has become an expert at bridging the gap between scientists and local officials. “We have a huge language barrier,” Njabo said. “And, at times, the bureaucracies in these areas can be very slow, so we start working with government way in advance.”

Since the institute opened a small center in Yaoundé, it has steadily grown. More than 2,000 scholars from 20 countries have now passed through. By partnering with the International Institute of Tropical Agriculture, the Congo Basin Institute seeks to grow further to develop a network of hubs that will protect biodiversity and improve residents’ lives.

As a Cameroonian, Njabo said, “We are very blessed and lucky to have this university coming in and wanting to stay. We put in everything we’ve got at every level to make sure this program is successful.”

Romeo Kamta Tchoffo, a Cameroonian graduate student who helped reopen the field station, said he relished doing field work with UCLA scientists. “In our country there is a lack of application,” Tchoffo said. “You are asked to read a book and understand how biology works, but you do not have the opportunity to be in contact and practice what you have learned.”

For UCLA students, the trip was a chance to become totally immersed in the environment they are studying — a lush rainforest with vine-covered trees inhabited by screeching hyrax — small, herbivorous mammals. Students took their morning baths in a creek as white-nosed guenons — forest monkeys — peered down at them from the forest canopy.

Smith wasn’t sure what he’d find in the Dja Reserve upon returning to the place he grew to love in the 1990s. With a rise in poaching, he feared entire species could be wiped out. He was immensely relieved to discover a stable, lively ecosystem with elephants, monkeys and birds. The reopening of Bouamir will ensure it stays that way. “This time, we need to hang on to the site and maintain it,” Smith said.

Through the Congo Basin Institute, Smith hopes to extend that kind of support across a region that’s home to 70 percent of the poorest inhabitants on Earth, numbering about 1 billion people, where diverse wildlife lives directly on the front lines of environmental threats. From there, he said, the entire continent can be transformed.

“My hope is that we will see an Africa that is feeding itself, using sustainable approaches on energy and preserving the natural environment,” Smith said. “There’s this mantra that you get from aid organizations: ‘The trouble with central Africa is that it’s bad governance, and it’s never going to get any better until they democratize.’

“The flipside of that is that they’re never going to do that if the best and brightest aren’t living there,” Smith said. “The more you can keep those people there, engaged and contributing, the more effective you’re going to be in the long run.”

Jessica Arriens contributed to this story.