Parents across the country are struggling with how they can come close to replacing teachers while the new coronavirus keeps their children’s schools closed. Even parents with teaching experience will tell you it’s a challenge.

But what they might also tell you is that the best thing isn’t doing worksheets or essays but keeping it simple and finding time to play.

UCLA’s Center X, based in the Graduate School of Education and Information Studies, is home to multiple projects that focus on instructing and supporting public school teachers. Now that their professional development programs have to be reorganized to go online, many of these projects are also revising their resources for parents hungry for tips — and for reassurance, which may be in greater demand.

Several Center X project directors noted that most parents are overwhelmed. Parents with multiple children at different grade levels, single parents, parents still working full time in or even outside the home, and many other parents and guardians may be juggling too many responsibilities to have much time to teach, they said.

“Remember that parents didn’t become teachers when schools closed down. Parents have always been their children’s first teachers,” said Tunette Powell, head of the UCLA Parent Empowerment Project. The mother of three is finishing up her doctorate in urban schooling while taking on the added challenge of working from home with her 5-, 8- and 10-year-old boys.

“There are so many resources and links that parents don’t know what to click on, and too much has been asked of them. Right now, simple has to be first,” Powell said.

It’s OK if right now you need to focus on basic well-being, Center X experts said. Keep your family fed, worry about giving enough hugs instead of preventing too much screen time, and find ways to involve children in everyday household tasks to increase the time they can talk with you, whether that’s making meals or talking about TV. If you have time for more, that’s when Center X experts want to offer their tips.

Among other things, she has had her sons join her in watching a documentary she’d been looking forward to. She asked them to take notes and paused the video occasionally to discuss vocabulary and history. She asked them to make a creative project about it afterward, suggesting they write a rap song or poem, make their own video using devices from school, or do a drawing. She recommends trying this with a show the family already watches together as well.

“It’s different from what my kids are used to, and they’re not as frustrated about writing because it’s fun,” Powell said.

Right now, teaching doesn’t have to be about planning something new, said Janene Ward and Karen Recinos, associate directors of the UCLA Mathematics Project.

“When I had young kids, I was totally trying to overstructure,” Ward said. Now mom to a 15- and 17-year-old, she wishes she had spent more time looking for math in playtime and everyday life, whether measuring ingredients, playing card games or organizing toy collections.

“Look at the experiences you’re already having and find the spaces in your everyday life where you can invite kids to think mathematically,” she said. “But more importantly, just play, play and play some more. Kids learn so much through play.”

“You’re doing math all the time,” said Recinos, who is balancing the needs of her 8- and 6-year-olds while her 1-year-old learns to walk. “You’re thinking about how many wipes you can use per day, telling time and measuring screen time. Invite your kids to notice your math and then let them lead and ask questions.”

Doing “counting collections” is another easy way to bring math into the day, said Angela Chan Turrou, a senior researcher with the UCLA Mathematics Project and mother of a 4-year-old. At its most basic level, it’s literally asking kids to count a group of items. At home, this might be a deck of playing cards, loose crayons, socks — you name it. For the youngest children, it’s about working on counting one by one, but as children grow, it’s about seeing how they keep track of what they’ve counted, then seeing them learn to group and count by twos, fives and higher. Older children might even want to write mathematical equations to show how they counted, say, five boxes of 250 paper clips plus six piles of 20 loose paper clips, Turrou said.

It’s hard for many parents to find time right now, Ward acknowledged, and relationships with kids should come first. If there’s time for math, simply offer opportunities to think mathematically and ask questions about how kids are thinking about numbers, she said.

“And if your kid says, ‘No more questions,’ back off,” Recinos said. “Know when to take a break and play. You’re doing enough. Celebrate playing a game with your kids that they finish without whining. Make sure you’re giving hugs.” 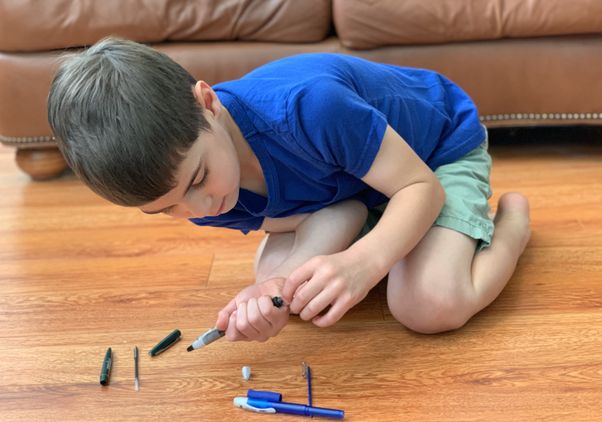 Alison Hewitt
Taking apart and reassembling pens is a good hands-on mechanical puzzle for this kindergartener.

The UCLA Science Project reminds parents that the difference between play and science is writing it down. “A notebook is a really good way to help kids be reflective,” said Jon Kovach, the project’s interim director.

“It’s not so much about making a document but about having space to work out your thinking,” he explained. Notebooks can encourage kids to write down or draw their observations, and then to come up with a list of unanswered questions they still have, Kovach said, “like, ‘Why is the flame on the oven blue, but on the grill it’s orange?’ And moving from, ‘I wonder what the name of that bird is’ to ‘I wonder how birds fly.’”

Parents can encourage kids to come up with theories about their answers, then ask questions or push back to help kids clarify their ideas.

“You don’t have to know the answer to ask them a question,” Kovach said. “Another simple activity you can do is allow them to take basic things apart and figure out how they work. Have them take some pens apart and compare ones that are made differently or determine what the parts are for. If they’re brave, they can put them back together.”

Daniel Diaz, director of the UCLA History–Geography Project and father of a kindergartener and a second grader, thinks parents should know that it’s OK to plan — and OK to feel like things aren’t going according to plan.

“It’s really challenging, and my wife and I are former high school teachers,” Diaz said. “One of the things that we’re hearing from parents who we work with is that it’s just too much.”

But for parents who need more ways to fill children’s time constructively, just look around the house, Diaz said.

“Cooking offers math, measuring, following directions and literacy,” he said. “There’s also history at home. Look for family photographs and heirlooms and have a conversation about where those things come from. Give a personal history lesson.”

Parents can use their home or neighborhood to teach geography. “Kids can make maps to build their spatial awareness,” Diaz said. “Learning doesn’t have to come from a lesson plan, just a conversation. And when all else fails, KCET’s PBS programming is a good option for parents to know that there’s at least some learning happening.” 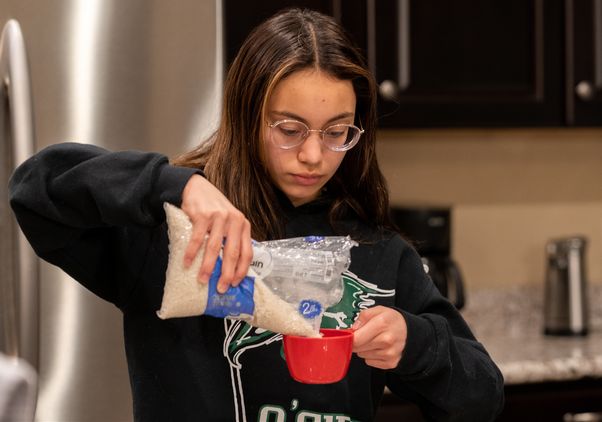 Shervaughnna Anderson-Byrd, director of UCLA’s California Reading and Literature Project, touts the importance of a schedule. As the mother of four children, aged 4, 12, 14 and 16, she points out that schedules are easier said than done. But for her, a schedule also means time for everyone to relax.

“Having a schedule with sufficient breaks and opportunities for movement and mindfulness is vital,” Anderson-Byrd said. And of course, find time to read throughout the day, whether by chapters or pages, be it fiction, cookbooks or comics. “And engage in a conversation about the reading, or what is the point?”

But as Diaz notes, it’s OK if schedules don’t go as planned. Powell, of the Parent Empowerment Project, recommends that parents get their kids to help design the school day, which doesn’t have to look the same every day. And breaks aren’t just for the kids, Powell said.

“The home has become everything right now — school, office, park, museum, zoo, restaurant,” Powell said. “It’s important for parents to get a break too. I had a day when it was too much for all of us and we didn’t do school that day. We took care of ourselves. That doesn’t make you less-than. You’ve acknowledged how you’re feeling, how your kids are feeling, and demonstrated a way to cope. Those ‘soft skills’ aren’t taught a lot in schools, and parents have a chance to teach them now.”

Lots of parents are worried about whether their children are learning enough and whether they might backslide, Powell said. But kids are also getting one-on-one school time with their parents.

“Let’s shift our thinking,” Powell said. “Parents have never stopped being among their children’s teachers. Some kids will flourish. And none of us are in this alone. Your neighbors are homeschooling. Your friends are homeschooling. We’re all in this together.”