Teams of UCLA students, staff and faculty who have created clever, first-of-their-kind software and applications that use the latest technologies to help solve problems unveiled the result of thousands of hours of hard work Thursday at an awards ceremony for the Third Annual Code for the Mission app competition.

The ingenuity, creativity and technical prowess of Bruins were showcased at the 2016 Mobility and Modern Web Conference, presented by the UCLA Office of Information Technology (OIT) and its higher ed and corporate partners. Code for the Mission was sponsored by OIT and the Office of Intellectual Property and Industry Sponsored Research.

Taking their bows at the California NanoSystems Institute at UCLA were teams who have developed, as proof of concept: a tool that can analyze and evaluate participation during online meetings for gender and ethnic biases; a fun, informative game that enlightens players about women pioneers in STEM (science, technology, engineering and math);  a baby monitor for deaf and hearing-impaired parents; and an app that helps prospective volunteers find service opportunities sorted by interest, distance and time. These tools are all designed to be available on your smart phone if and when they become full-fledged, downloadable applications.

“I want to commend the teams for helping us advance the work in each of these important areas,” Chancellor Gene Block said at the presentation before announcing the winners and handing out the awards.

“The bright hope of developing apps to solve pressing societal challenges is just in its infancy,” Chancellor Block said. “I’m pleased that our scholars are right at the forefront of the trend. As you developed these amazing apps, you’ve learned how to create digital tools that will shape a more promising future.”

Teaming up with Chancellor Block

Among the new apps was one inspired by his vision for a tool to analyze and improve group dynamics at meetings by making them more productive, open and inclusive of all voices, including those of women and people of color. 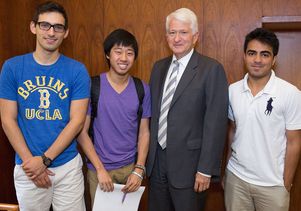 Signing on last July to this challenge were undergraduates Will Gu, an incoming undeclared fourth-year student; Tanuj Lalwani, a second-year computer science major; and Adam Garcia, a fifth-year mechanical engineering major. The three spent this past summer meeting daily, video-conferencing and periodically checking in with Chancellor Block on the project, which was supported by the UCLA Office of Intellectual Property and Industry Sponsored Research (OIP-ISR) and Blackstone LaunchPad of Startup UCLA.

The app the team created, “Record,” which promotes diversity in the workplace by breaking down the amount of word space — time spent talking — at a meeting by each participant, who self-identifies by name, gender and ethnicity.

The initial concept was for participants in a meeting to have their smart phones loaded with the app, which would use voice-recognition software to keep track of each person speaking. But that approach wouldn’t work for a couple of reasons, explained Heather Felix, campus relations manager for OIP-ISR. Phone microphones aren’t directional, so they cannot clearly capture what is said on the other side of a conference table, she explained. And “voice recognition is still not advanced enough to distinguish among all the voices.”

Undeterred, the team decided to create an app that can analyze an online discussion — via Skype, Webex, Appletalk or other platforms — by word space as well as by the flow of the conversation, identifying the points in the discussion when each participant speaks. The app also displays how much “speaking” time belonged to people of color or by gender. “You can take this information and correct for biases,” Gu said, for example, using strategies to encourage broader participation.

“In the future, the app might be able to analyze the discussion by emotion and tone and be used for in-person meetings” said Garcia.

The students said they learned a lot from the challenging project, as well as from each other.

Garcia said he came in “with zero web development experience” and was able to learn so much from Gu and Lalwani that he now knows what he wants to do when he graduates with a degree in mechanical engineering. “I’ve always been interested in getting into the startup scene. This gave me the technical abilities so now I can act on that. It’s no longer a far-fetched idea. “

Gu, who expertly worked on the “back end” of the app, said he was inspired by his team members, “who rose to the occasion and really finished strong when the deadline was coming for the app. … Overall, it was a fun experience.”  Each team member receives $1,000.

Code for the Mission

Out of 25 teams that submitted their apps to the Code for the Mission competition, winners were selected in three categories of education, research and service; each winning team will receive $5,000 in prize money provided by the competition's sponsors.

The categories and winners are:

UCLA undergraduate Megan Williams and her triplet sisters, Alicia and Stephanie, created an educational game app, “Agent XX,” to encourage young women to solve problems in STEM, learn concepts in each STEM field, converse with pioneering women scientists and develop a sense of capability and confidence as they complete their mission. Set 50 years in the future, the game takes players on an action-packed quest through three centuries of STEM history.

The sound of a baby’s voice is music to their parents’ ears. But those who are deaf or hearing-impaired know only silence and have to visually check on their infants constantly to see if they are all right. So UCLA researcher Ariana Anderson, graduate student Usha Nookala, staff member Yining Zhao and undergraduate student Lauren Dunlap put together an app that acts as a baby monitor by turning sounds into visual cues using machine learning and signal-processing algorithms. “ChatterBaby” translates an infant’s vocalizations into “states” to indicate when he or she is hungry, fussy, babbling, cooing, laughing or in pain.

UCLA staff member Kathleen Ly and undergraduate student Taylor Parker have produced a UCLA Volunteer Center app that helps sync up prospective volunteers with a service opportunity based on distance, time and interest. Along with a calendar of volunteer events and a map showing their locations, users can read articles from the center’s website and see the Volunteer Day website.