Los Angeles has long been the setting for detective stories and Hollywood noir, but the real who-done-it is the mystery surrounding the question of why Los Angeles, a leader among cities for most of the 20th century, began an economic slide after 1970, falling behind such regions as the Bay Area.

UCLA Luskin School of Public Affairs researcher and author Michael Storper, the distinguished professor of regional and international development in the urban planning department, has some answers. He recently put the city’s economic history under a magnifying glass during a public conversation with former Los Angeles City Councilman and County Supervisor Zev Yaroslavsky, now director of the Los Angeles Initiative at UCLA Luskin. The discussion took place before a gathering hosted by Town Hall Los Angeles, a nonprofit leadership forum. 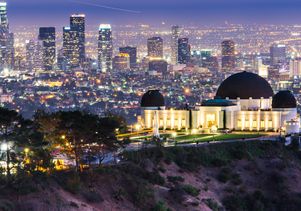 Storper, author of “The Rise and Fall of Urban Economies: Lessons from San Francisco and Los Angeles,” said the old economies, based principally on manufacturing, began to shift to the new economy around 1970.

“In 1970, the Bay Area and greater Los Angeles were about equal in what we might call their wealth and development level,” Storper said. 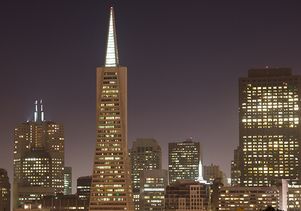 Why did the Bay Area's fortunes flourish? And why did the L.A. area's economy flounder?

Today, the Bay Area is still No. 1, but L.A. is No.  25 among regions with more than 2 million people. “That’s a really big slippage that does not put us, frankly, in the best of company,” the author said.

During that period, a revolution in information technology and finance took place, “flipping the switch” for more globalization and the development of advanced services, Storper said. Now the Bay Area is 30 percent richer than Los Angeles. “What that suggests is that the Bay Area somehow managed the transition more successfully than we did here in Southern California.”

Since 1970, the Bay Area has given birth to Silicon Valley, refocused its economy in finance, landed several IT-related corporate headquarters and is currently winning in biotech. By contrast, greater Los Angeles lost high-wage aerospace and defense firms, as well as several corporate headquarters. “We grew in light manufacturing, but light manufacturing is the low-wage part of the economy,” he added.

And while L.A. has Hollywood — “the bright star, our super-dynamic, supernova,” Storper said — it is not enough to support a region of 18 million people. “It has huge positive benefits, but it’s just not big enough,” he said.

“We have to ask ourselves why is this happening," Storper said, “given that L.A. was the envy of the country and the world for much of the 20th century. And if you look at L.A., if you roll back the film to 1970, we had more engineers; we had a vibrant entrepreneurial culture; we had more tech firms; we had equal education levels; and we, in many ways, had better infrastructure than the Bay Area did.”

But are people really better off in Northern California?

“The answer is yes,” Storper said. “When you correct for cost of living for each part of the population at each income level and the amount of money they spent on housing, they still come out with having somewhere between 20 to 25 percent higher per capita income than we do.”

So does the L.A. area have a lower per capita income because it’s bigger? No, it’s not a question of geographical scale, Storper said. “Seventy-five percent of the population of the Bay Area lives in counties that are higher in per capita income than our richest county, which is Orange County. They have regionwide prosperity up in Northern California.”

To find out what’s behind this reversal of fortunes, Storper and his co-researchers started looking into the different core sectors of the economy: aerospace, information technology, entertainment, finance, logistics, trade and biotech. They found very different stories about how IT and biotech firms, business leaders, leadership groups and public agencies use the resources of their regions to establish a foothold in the new economy.

“There’s a really strong business leadership group in the Bay Area,” Storper said. “We didn’t really know where things were going, but the Bay Area Council got on it early in the 1980s and said, ‘The future is in being the high-tech, high-wage and high-skill economy. We’re never going to make it in manufacturing again. We’re too expensive, and there’s no way to roll that back significantly,’ so they pushed a high-road vision for the Bay Area.”

And the Bay Area Council wasn’t acting alone, relying on business leadership networks. Storper said his researchers looked at the major firms of both regions and asked who sits the boards of directors.

“What emerges is an absolutely striking difference,” Storper said. “In the Bay Area it’s highly networked. They are all networked and talking to each other because they are all on each other’s boards of directors.” Not so for Los Angeles. “You look at L.A., and that’s not the case,” he said. “It’s a bunch of separate communities.”

“And it’s not because our universities aren’t as good,” he said. “It’s because theirs are more connected than ours.”

For Storper, the core issue for L.A. is whether we can “rebuild and change the way we do things and, in particular, rebuild our human connectivity” in order to be innovative and move forward in the new economy.

An eyewitness to California history

A longtime civic leader who witnessed the rise and fall of L.A. from a different perspective, Yaroslavsky called Storper's book "one of the most important pieces of literature I’ve read on Los Angeles in an awfully long time. What it did was hold up a mirror to us — those of us in public life, the private sector, stakeholders in the community. It said, ‘Here’s what’s been happening in the last 40 years.’”

Yaroslavsky spoke about the factors in play, following Storper's presentation. Public investment, for one, was "a huge piece of this puzzle.” Take public transportation. “Starting in 1970, the BART system was underway,” he said. “By the time we cut the ribbon on the first 4.4 miles of the subway in Los Angeles, it was 1993.”

Going back to the early 1970s, Yaroslavsky said that San Francisco had plateaued while Los Angeles seemed to be on a roll.

“The Korean and Vietnam wars, the Cold War, the space race, and the aircraft and aerospace industries were a backbone of the regional economy, and there was no thought that this would dissipate any time soon,” he said. “As a result, San Francisco’s business leaders looked ahead to position their region for the economy of the future, while Los Angeles leaders were looking in the rear-view mirror, searching for ways to preserve aerospace, manufacturing and other industries that had carried it since the war years.”

Yaroslavsky said that, within a span of 20 years, these portions of L.A.’s economic base had diminished or disappeared, while the Bay Area was on its way. And L.A. is still playing catch-up, he said.

Another factor, he pointed out, was that much of the political power in the state was based in Northern California where the state's U.S. senators, state legislators and assembly speakers came from for two decades.

“Considerable public resources were invested in the north to provide infrastructure for the burgeoning industries of the future,” he said. “The Bay Area had a focused vision of where they wanted to go, and federal and state representatives partnered with them to help make it happen.”

Southern California did not have a similar cohesive, focused civic leadership with a road map of where they wanted to go, Yaroslavsky said. During this period, most of the remaining Fortune 500 corporations that called L.A. home left.

But Yaroslavsky said that there are signs that Southern California is turning the corner; several voter-approved measures in the last six years will provide an investment of hundreds of billions of dollars in transportation infrastructure in the region.

Political power has also shifted in Southern California’s favor, he said. “The leaders of our legislature are both from L.A. County. The region seems to be working more collaboratively in recent years than in the past.”

Yaroslavsky said L.A.’s economic future is promising, but cautioned that this cannot be taken for granted.

“We are competing with other metropolitan areas along the coast, across the country and around the world,” he said. “Investments in our infrastructure — transit, harbor, airports and communications — are critical to facilitate private-sector expansion. Public education and housing costs also heavily influence where private investment is made.”

This story appears on the UCLA Luskin School of Public Affairs website.