Professor Timu Gallien has had a fascination with the ocean from the time of her birth in American Samoa. As a young girl, she was captivated when rainstorms filled the drainage ditch near her Indiana home with supercritical flows of surging water. Over a lifetime, she has developed those early interests into a deep understanding of urban flood risk in vulnerable coastal communities, which is of particular importance as sea levels rise because of climate change.

Gallien, who recently joined UCLA as an assistant professor of civil and environmental engineering, earned her Ph.D. from UC Irvine and went on to UC San Diego to do postdoctoral research at Scripps Institution of Oceanography. Her research focused on the complex set of processes in coastal zones where land meets water; where the swirling amalgam of forces from ocean waves, tides, storm surges, and sea level elevations from climactic conditions like El Niño crash into hydrologic forces from land, such as overland flows and sewer system runoff after heavy rainfalls that empty into coastal estuaries, or products of human activity, such as seawalls.

“All of these things interact and create very complicated dynamics," she said. "My research is focused on understanding this system.”

Gallien plans to study how the state of the beach itself affects backshore vulnerabilities like flooding and the risk of infrastructure damage. Currently, even the highest-quality mathematical models assume a static beach that does not evolve over time. However, the beach changes daily with tides and waves and more broadly with the seasons, from a narrow, rocky beach in winter to a wide, sandy beach in summer, and everything in between. Beaches in Southern California are also highly managed to keep people dry and safe and to prevent erosion, with physical management projects such as using bulldozers to erect beach berms or, in the case of Seal Beach, to build a large sand dike each winter to protect the backshore.

“These techniques are applied ad hoc, and anecdotally they must work because taxpayers and municipalities would not spend hundreds of thousands of dollars a year doing these things if there wasn’t some benefit,” Gallien said. “Yet there is no understanding in the scientific literature of how beaches perform when these management techniques are applied. So that is something I’m interested in addressing.” 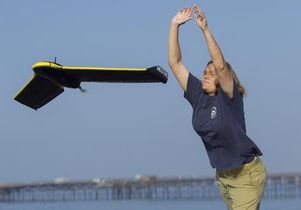 Answering those questions requires fieldwork. One morning last summer, Gallien and two field engineers from Scripps used an unmanned aerial vehicle to survey a Los Angeles-area beach. They were collecting highly accurate subaerial beach topography with a resolution of approximately 1 centimeter as part of a longitudinal study she hopes to expand to other California coastal communities.

“I’m very lucky to be at UCLA. It’s a dream come true for somebody that does what I do,” Gallien said. “Southern California is among the most vulnerable locations in the United States to sea level rise, so there is no shortage of things to work on here.”

Also of vital importance to Gallien are her mentorship, teaching and community outreach activities. She is most passionate to continue mentoring first-generation students who often face very challenging family demands amidst their academic pursuits. Her guidance has helped past mentees overcome these challenges to continue into graduate programs and science, technology, engineering and mathematics (STEM) careers. She has a special interest in teaching the public, especially children, about beach science. Gallien has taught 6th- and 8th-grade students through the Birch Aquarium Beach Science program and, during her postdoctoral studies, she spearheaded the Mobile Beach Erosion Monitoring program, which will now expand to engage Los Angeles residents.

Having had the experience of being one of the few women in upper-division undergraduate engineering classes when she was a student, she also has a strong desire to act as a role model to inspire future generations of women in STEM.

“You often can’t dream about becoming something unless you see somebody whom you can connect with that you feel is a role model,” Gallien said. “It’s critical for me to work with the students who are struggling to find their voice because they haven’t found that connection yet.

"I’ve been extremely impressed with the quality of students at UCLA," she added. "It’s an exciting time, and I’m really excited to be a Bruin.”

This story was originally published in UCLA Engineer, the magazine of the UCLA Henry Samueli School of Engineering and Applied Science.