Raul Hinojosa-Ojeda is an associate professor in the UCLA Department of Chicana and Chicano Studies and he is the founder and director of the UCLA North American Integration Development Center. Maksim Wynn is an analyst at the UCLA North American Integration and Development Center. This piece, which is the executive summary of recently released report about immigration, appeared Sept. 9 in The Huffington Post.

The increasing number of migrant children being apprehended at the U.S. border has finally focused media and political attention on the humanitarian plight of Central American migrant families. President Obama cited the public’s reaction to this “immigration crisis” as the reason that he has delayed taking executive action on immigration reform. The problem appears to be that many in Washington and in the media are advancing a narrative that is a shortsighted distortion of the facts, is bereft of historical context, and could lead to counter-productive policy responses. This storyline centers on the claim that there is a “surging crisis of unaccompanied minors and that it is a phenomenon driven by violent crime and drug trafficking.” This narrative is incorrect on all counts, but it does provide an opportunity to highlight five important lessons that should guide immigration policy going forward.

The total number of children currently being apprehended is roughly half of what it was before the Great Recession (see figure 1). This is representative of a long-term cyclical phenomenon rather than an unprecedented surging crisis. Most of the coverage surrounding the current “crisis” has used the Border Patrol’s recently published data set, which begins with Fiscal Year (FY) 2009. Looking at juvenile apprehension statistics beginning in FY 2003 reveals how relying solely on the Border Patrol’s recent data obscures an overall decrease in juvenile apprehension over the last decade. In addition, children represent a small share of all apprehensions, and they have represented roughly the same small share for the better part of a decade (see figure 2). 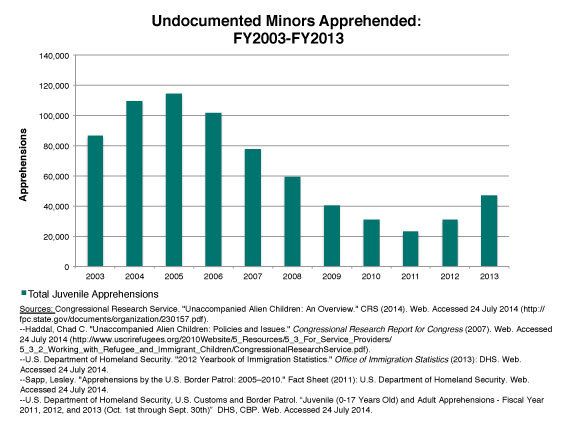 2) The surge in the apprehension of “unaccompanied alien children” is an artifact of the Trafficking Victims Protection Reauthorization Act of 2008.

The increase in the share of “unaccompanied alien children” (UAC) being apprehended is the product of a 2008 law (Wilberforce Trafficking Victims Protection Reauthorization Act) that requires border enforcement officials to more accurately interview, classify and legally process the children they catch, particularly if they are from “non-contiguous countries.”

The number of unaccompanied children Border Patrol reported apprehending jumped from around 7,500 in 2008 to almost 20,000 in 2009; the year that the 2008 TVPRA took effect (see figure 3). This strongly suggests that prior to the 2008 TVPRA misclassification was widespread, and that the law led to positive changes in the Border Patrol’s screening and interview procedures. A 2007 Congressional Research Service report highlighted claims that Border Patrol officials were deliberately misclassifying some of the children. Investigations by the Department of Justice (DOJ) and the Department of Homeland Security (DHS) confirmed that accompanied and unaccompanied children had been intentionally misclassified but also stated that “malicious intent” could not be proven.

Considering the post-2008 TVPRA increase in UAC apprehension, and the high level of pre-recession juvenile migration, the current levels of UAC apprehension were predictable and should have been planned for by immigration enforcement officials. These officials’ current inability to house unaccompanied children, and to handle their legal proceedings in a timely manner, does not stem from an unprecedented increase in child migration, or from a lack of enforcement resources. It is instead the product of well-funded immigration enforcement agencies’ lack of foresight. This is especially unacceptable when one considers that juvenile apprehensions constitute such a small share of the total (again see figure 2). 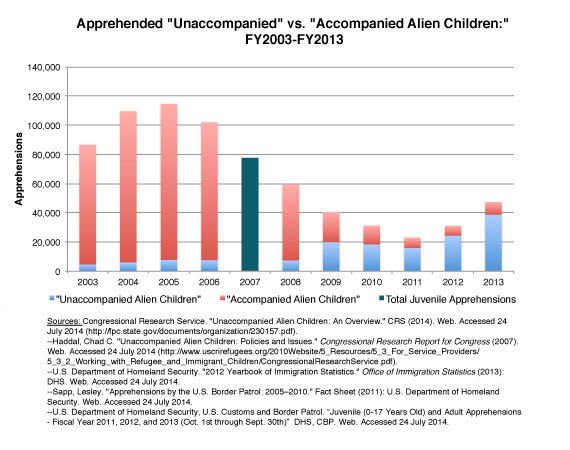 3) The crisis is not a Central American phenomenon; Mexican migration continues to be the larger component.

Central Americans make up a disproportionate share of the UAC population in detention in part because the 2008 law does not provide Mexican children with the same legal rights and protections. Central American workers in the U.S. are also younger than their Mexican counterparts and are thus more likely to have left children behind and to attempt to bring these children to be with them in the United States.

4) Central American violence and poverty are still root causes, but do not drive the level of migration.

The recent increase in Central American children being apprehended at the border is not being driven by an increase in violent crime related to drug trafficking (see full NAID Center report for details).

The strength of the U.S. job market continues to be the primary determinant of the level and timing of immigration flows. Violence and poverty remain important root causes of the supply of Central American migrants generally, but changes in poverty and murder rates do not directly correlate with changes in emigration rates.

The recent decline in the US’s unemployment rate is the principle cause of increased immigration among both adults and children. When the unemployment rate is high and jobs are scarce, so too are the undocumented. It is not surprising that the economic recovery, coupled with falling unemployment rates, has triggered a dramatic increase in immigration. Nor is it surprising that Central American children represent a relatively large segment of this increase. The length of the great recession, coupled with the more recent arrival and relative youth of the U.S.’s Central American-born population, means that for many of them this is the first time they have had the financial capacity to bring their children north. 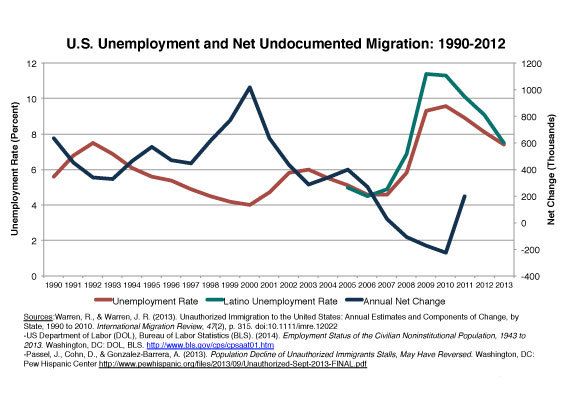 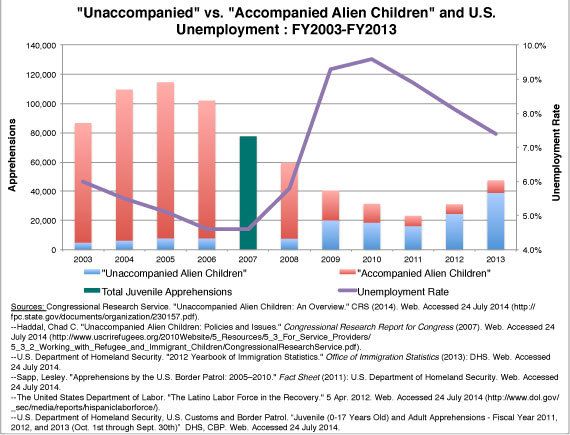 Recently released numbers from the Department of Labor showed a sharp decrease in unemployment in the second quarter of 2014, which has predictably coincided with the height of the UAC surge. In light of these figures, it is unsurprising that the most recent wave of Central American immigration has come as the unemployment rate in the US continues to drop and the economy as a whole is growing. This is why border enforcement officials should have known that economic recovery would be coupled with an increase in UAC apprehensions, and why they should have allotted their considerable resources accordingly.

In dispelling myths by examining the full facts, we are in no way attempting to deemphasize the severity of the poverty, violence and humanitarian crisis in Central America. Nor are we suggesting that the TVPRA — much less DACA — “caused the crisis” and should thus be repealed, as some in congress have recently suggested. On the contrary, we are stating that the crisis of Central American juvenile migration is the product of deeply rooted historical and international dynamics that are only now coming to broad public attention.

Our most important conclusion is that the current crisis further proves the pressing need for comprehensive immigration reform. This reform must include legal means for migrants and their families to address the US's demand for their labor. In addition, immigration reform must be "truly comprehensive" and support innovative and cost effective policies that address the root causes of emigration in migrant-sending nations. In the short term, and in the absence of complete immigration reform, we also believe that the due process protections afforded by the TVPRA should be strengthened and should be simultaneously extended to children from Mexico and Canada. Finally the President should act to provide administrative relief to long-term workers and their families, both stimulating the US economy and eliminating the real humanitarian crisis of family separation.