Jeffrank Solórzano had a very specific dream ever since he was a little boy: First, he would get accepted to UCLA. Then he would introduce his parents to a welcoming campus community. Luckily, he got to do both.

He first became aware of the campus when, as a child, he accompanied his parents to UCLA to pick up items for his father’s employer.

“I remember asking my mom what this place was,” recalled Solórzano, a first-year UCLA neuroscience major. “She told me that this is where the smart kids go. From then on, I knew I wanted to be here.”

What neither Solórzano nor his parents realized at the time was that, in addition to being one of the most reputable university campuses in the world, UCLA was starting to develop a reputation as a national leader in its support of lesbian, gay, bisexual, transgender, intersex and questioning students.

But his parents learned about this — and more — when Jeffrank, who came out as gay as a high school junior, brought them to UCLA for the inaugural Pride Admit Weekend in April 2014. Pride Admit Weekend is the first and only event of its kind at any American college or university. It’s just one of the many services and resources offered to Bruins and their families and allies through the UCLA LGBT Campus Resource Center.

Currently celebrating its 20th anniversary, the center bolsters UCLA’s commitment to fostering an inclusive and diverse campus community. More than 10,000 people visit the center each year.

“Campuses across the world and across the country have seen us as a model over the past 20 years and have actually used what we’ve done to build their own spaces, market their own services and get funding from their campuses,” said the center’s director Raja Bhattar.

In 2014, UCLA was listed on the Campus Pride 2014 Top 50 LGBT-Friendly Colleges and Universities. Additionally, Campus Pride named UCLA among its Top 10 transgender-friendliest campuses.

Located at the crossroads of campus, the center has two entrances, one that faces out onto Bruin Plaza and another more discreet entrance inside the Student Activities Center.

To encourage students to visit, regardless of their sexual orientation and identity, the center offers all students free printing so that they can become familiar with the space.

Decades of research, education and outreach in Westwood

UCLA has a long history of LGBTIQ advocacy and inclusion that spans at least seven decades. In the 1950s, research conducted by UCLA psychologist Evelyn Hooker helped remove sexual orientation from the Diagnostic and Statistical Manual of Mental Disorders, frequently used by psychiatrists to classify and diagnose mental disorders.

UCLA is also the home of OutWrite, the nation’s oldest campus-based queer newsmagazine, and OutFest, the country’s leading LGBT festival, which was founded by two UCLA students. UCLA students can minor in LGBT studies and join more than 21 LGBT-related student organizations. They may choose from one of several gender-neutral housing options or decide to live on a themed floor reserved for students interested in gender, sexuality and society. There are also a number of gender-inclusive restrooms on campus. And when students graduate, they can attend the annual lavender graduation ceremony that honors LGBT students and their supporters.

Also, campus is home to the Williams Institute at the School of Law, a national think tank dedicated to conducting rigorous, independent research on sexual orientation and gender identity law and public policy. The Ronald Reagan UCLA Medical Center has earned the distinction of being a “Leader in LGBT Healthcare Equality.” 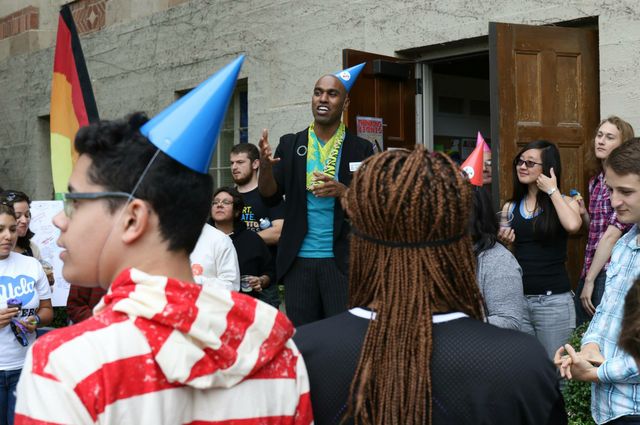 “We’ve just started to collect graphic novels and expand our collection on transgender identity,” said Bhattar. “One of our biggest collections is 1950s and ’60s lesbian fiction.”

Additionally, the center has enhanced its efforts to support queer women and transgender, non-binary, and gender nonconforming individuals through programming and social events. Among them are “Womxn’s Wednesdays,” a weekly discussion and community building space for and by queer and trans women.

Solórzano was a 16-year-old living in Bakersfield, California, who had long questioned his sexual identity.

He remembers the day he came out to his mother.

“She was pretty accepting, but she was in complete shock,” said Solórzano. “She said, ‘I don’t understand. You’re an athlete; you do varsity sports. You played with boy toys. You’re very masculine.’ She had a stereotype of gay men, and I don’t blame her. The media emphasize the feminine traits of gay men on television, and that was maybe the only exposure she ever had.”

Soon after, the teenager came out to his father. The younger Solórzano had an anxiety attack before he could even get the words out.

“I couldn’t breathe. It was so hard to tell him. I almost got kicked out of my house.”

Solórzano said that the UCLA LGBT Resource Center has become a home away from home, offering him a place to kick back and relax when he wants to. “The space is open for everyone. It doesn’t matter if you’re straight or if you identify as queer. It’s a safe space where everyone is accepted.”

He said it is also a place where he hopes to further develop his leadership skills — he was a peer mentor and discussion facilitator during the 2015 Pride Admit Weekend held in April.

That’s when Solórzano shared his coming-out story. He said one mother’s words at the end of the weekend left him feeling as if he was already making a difference.

“She said, ‘Thank you for sharing your story. My son is definitely coming to UCLA. I’m so happy that he will have a safe spot here.’”