More than 300 UCLA Ph.D. students received their degrees Thursday at Royce Hall as their faculty mentors, in their colorful academic regalia, and family members beamed their pride. In all, a total of 770 doctoral degrees were awarded this year by UCLA. 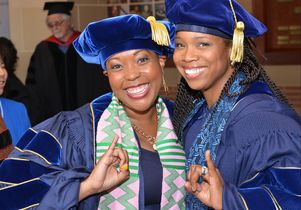 Altogether, the university has awarded more than 32,000 doctoral degrees since 1939. This year's class of students received doctoral degrees in philosophy, education, environmental science and engineering, musical arts and public health; 79 majors were represented, with the UCLA Henry Samueli School of Engineering and Applied Science awarding the most doctoral degrees this year.

"Together, ... we celebrate the life of the mind, the drive to create, the passion for discovery, the community of faculty and students as teachers and scholars — the value of the UCLA family," said Vice Provost for Graduate Education and Dean of the Graduate Division Robin Garrell in her commencement address."We are united in our shared pursuits, and in our belief that learning, questioning and probing, speaking and writing and performing, challenging and provoking are valuable: not only to us, but to our communities and to our society."

Among the new doctors of education was William Purdy, who undertook an analysis of the early history of UCLA, from 1919 through 1938, in the context of the then-existing private colleges, the 1918 flu pandemic and the ambitious real estate developers who planned Westwood and shaped the surrounding neighborhoods, Garrell noted.

"William’s work sheds light on UCLA’s birth from the Los Angeles State Normal School, through our adolescent years as the University of California, 'Southern Branch.'  And I’ll remind you that in back in 1923, Charles Lipman, who was dean of Berkeley’s Graduate Division, told one of our UCLA faculty, and I quote, 'They will never, never, never offer graduate work on the Los Angeles campus.'   Well, here we are. Just saying…  Congratulations, William!"