The UCLA Center for World Health and the LA5 Rotary Club brought together a panel of experts to talk about how large cities like Los Angeles can help halt the degradation of the Earth’s air, water and land that has altered biodiversity, resulting in the introduction of tropical diseases like dengue fever into the southern United States.

The failing health of the Earth was the topic of a special report on planetary health commissioned by the British medical journal, The Lancet, in partnership with the Rockefeller Foundation. To discuss how Los Angeles and other cities can help save the planet, the UCLA Center for World Health and the rotary club invited 200 business leaders to hear the panel discussion at a July 17 luncheon at City Club Los Angeles downtown.

“Our planet and its ability to sustain human life are in danger,” explained Thomas Coates, director of the UCLA Center for World Health and a professor of medicine at the David Geffen School of Medicine at UCLA.  “Humanity bears a large share of the blame for how bad things have become.” 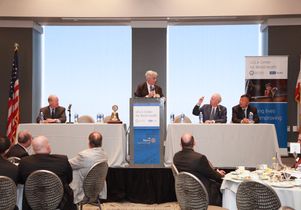 Margaret Malloy
At the podium, Tom Coates, director of the Center for World Health and distinguished professor of medicine at the David Geffen School of Medicine at UCLA, listens to Sir Andy Haines make a point.

While the report noted that world health is improving, it comes at a price, said Sir Andy Haines, chair of the Commission on Planetary Health and a report co-author. “We are mortgaging the prospect of a healthy future for our children’s children.”

Citing one example, Haines noted that declining numbers of pollinating honeybees, butterflies and hummingbirds will undermine the production of fresh fruits, vegetables, nuts and seeds. The report predicts that millions of people will die from preventable disorders like diabetes and cardiovascular disease related to the loss of fresh produce in their diets.

“Still, the news isn’t all bleak,” Haines added. “Our report emphasizes there are solutions.” He pointed to ecosystem approaches, such as mangrove forests, coral reefs and wetlands, which can protect people from floods and tidal warming more effectively than artificial structures.

According to The Lancet, large mega-cities like Los Angeles can play a major role in taking action to save the planet. Haines outlined the need for safe neighborhoods with easy-to-access mass transit, where citizens are able to incorporate daily exercise, such as walking or cycling to transit, work and school, as opposed to working out at a gym.

Cities like London, where the underground trains reach every corner of the city as well as the suburbs and countryside, come to mind, he added.

“Our focus is not just on protecting the environment, but on strengthening the economy and building equity too,” said Peterson. “Equity means ensuring that the city also provides clean, safe and walkable neighborhoods for poor people, who suffer the most and have the hardest time recovering from natural disasters.”

Some progress is being made, Peterson emphasized. Los Angeles’ air quality has vastly improved from the 1970s. The city has applied gray coating over asphalt parking lots to reduce their summer temperatures by 10 degrees and lower heat gain. And the mayor is seeking to reduce the city’s dependence on imported water by increasing recycling and the use of treated waste water.

Garcetti also aims to generate more natural energy by harnessing solar power. To obtain a solar permit, L.A. residents used to have to fight traffic to get downtown and then stand in a long line, Peterson said. Now they can apply online in order to adapt their homes for solar power.

“Los Angeles’ economy has grown more robust as the city has ratcheted up its regulation of greenhouse gas emissions,” said Peterson. “Our goal is to reduce emissions by 60 percent by the year 2035.”

To learn how you can do your part, log on to http://plan.lamayor.org or to Twitter at #adopttheplan. Find out what the UCLA Center for World Health is doing to improve people’s health around the globe.