After being rescued by IoES ecologists, UCLA environmental science students and partners, a population of 28 genetically significant turtles were released back into the wild last May after living in captivity for eight months.

Biologists with the UCLA La Kretz Center for California Conservation Science recently went on a rescue mission to save endangered turtles that have become dehydrated, emaciated and stressed-out by the extended drought.

The scientists stepped in to work with the California Department of Fish and Wildlife to rescue nearly 30 Southwestern Pond Turtles and bring them to UCLA for rehabilitation. Classified as a “species of special concern,” with populations south of Santa Barbara in severe decline for decades, the turtles, also known by scientists as Emys pallida, now reside in large pools filled with fresh water on the roof of the Botany Building on campus.

“This is the kind of conservation project the center supports — it saves a very sensitive, declining species and serves to illustrate how we can help promote biodiversity in Southern California,” said Brad Shaffer, director of the center, where ecologists are also advising on reintroduction programs of other species, including the threatened California red-legged frog. 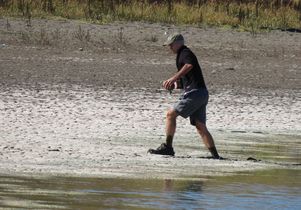 Located directly on the San Andreas Fault within the Angeles National Forest, the turtles’ home, Elizabeth Lake, contains one of the largest populations of native pond turtles left in Southern California. With the state suffering from its worst drought in 100 years, the lake’s entire ecosystem is being compromised by the arid conditions.

When full, the lake is about 23 feet deep. Now half or more of it is bone-dry. Some parts of the lake are no more than a few feet deep. The lake has become extremely alkaline and salty — negatively impacting the turtles and the fish and tadpoles they prey. Elevated levels of salinity and particulates in the water, combined with extreme exposure to the sun, have resulted in an accumulation and encrusting of alkaline and other minerals on the turtles’ scarred-up shell — the full effects of which biologists are still trying to understand.

The biologists noticed their weakened condition when they spotted them around the lake. The turtles didn’t move or even try to flee when approached.

Their temporary home at UCLA is equipped with places to hide and bask, which is important for the turtles’ well-being. The animals are being fed a high-protein diet that mimics their natural food source and are gaining weight and showing steady improvement. Their shells are no longer encrusted with a cement-like mineral coating. Phil Spinks, a staff research associate and the La Kretz Center’s resident turtle expert, is primarily caring for them, cleaning their tanks regularly and closely monitoring their health.

Collaborators at the Turtle Conservancy in Ojai also brought turtles from Elizabeth Lake to their facility with a similar plan. Between the two colonies, the ecologists feel they have captured all of the important genetic diversity in the population and can restart the species even if all the other turtles perish.

Given that it is one of the largest, healthiest populations left in that area, both groups will put them back in the wild as soon as they are healthy to allow the greatest chance of ensuring the survival of the population.

“We intend to release the turtles back into Elizabeth Lake after the [anticipated] winter rains refill the lake and restore it ecologically,” Shaffer said. “In all likelihood if the rain continues we will return the turtles in spring of 2015.”