To address the terrorist attacks that have targeted Paris and other Western cities, two related crises must first be resolved, said a UCLA law professor and expert in the Middle East: the sectarian conflict between Shiite and Sunni Muslims in the Middle East and the West’s relationship to its own internal Muslim communities.

Law professor Asli Ü. Bâli said that Western countries need to rethink a strategy that bases regional security in the Middle East on Saudi Arabia, which “has been the purveyor and fomenter of many of the kinds of destabilizing ideologies that are now exploding in spectacular violence in Western cities.”

Bâli, whose research interests span non-proliferation, the use of force, and the politics and doctrines of intervention, was one of four UCLA faculty panelists who recently participated in an insightful discussion that focused on the causes and consequences of the Nov. 13 terrorist attacks in Paris and on the larger issue of ISIS, which claimed responsibility for the violence. 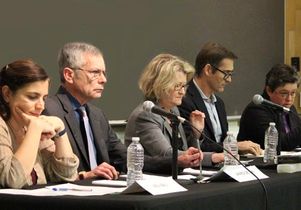 Bâli was joined by historian Caroline Ford, a specialist in modern French history; Dominic Thomas, chair of the UCLA Department of French and Francophone Studies; and James Gelvin, a professor of history and interim co-director of the UCLA Center for Near Eastern Studies. Organized by the Center for European and Russian Studies (CERS) and cosponsored by the Burkle Center for International Relations and the Center for Near Eastern Studies, the discussion was moderated by CERS Director Laure Murat, professor of French and Francophone studies.

Western nations have chosen to double down on their security relationships with Saudi Arabia and to adopt extreme measures that single out Muslim communities domestically, pushing refugees into detention conditions that make them ripe for further radicalization, Bâli said.

These are wrong choices, Bâli said. The right choices would be a sane refugee policy that enables Syrians to resettle and restart their lives.

In the case of France, Thomas, whose research encompasses globalization and the politics of France and Francophone Africa, emphasized that, unlike the United Kingdom, France has failed to address head-on problems of race in the postcolonial era. That failure, together with the fact that the French constitution prohibits any category of citizen other than “French,” has led to an indifference to the question of race.

In 2005, disaffected Muslim youth rioted in the outskirts of Paris where the French state had built public housing for primarily low-income immigrants, many of whom are Muslim.

“The 2005 riots became known as the revolt or the insurrection of the ‘invisibles,’” Thomas explained. The rioters were invisible in two ways: Their markers of difference and ethnicity were not recognized under the French constitution, and they were geographically marginalized at the edge of French cities.

“Rather than effectively responding to these young people’s needs,” Thomas said, there was in France and EU–wide "an increasing … movement toward the ‘invisibilization’ of Islam: the banning of burkas, of veils, of headscarves, of minarets on mosques, etc.” Laïcité, the separation of church and state, was, in turn, invoked to address what Thomas called “the French and EU-wide identity crisis.”

Ford warned against conflating the home-grown terrorists of France and Belgium who carried out the Paris attacks with the disaffected Muslim youth who rioted in 2005. Jihadist recruitment has diversified, she said, to include young middle-class Muslim men and, for the first time, young Muslim Women.

Ford also cautioned against claims that ISIS directed the Paris attacks. “Not enough attention is being paid to the vision of jihadis in Europe, separate and apart from ISIS,” she said.

Although ISIS looked unstoppable in 2014 when it seized large and largely uninhabited swaths of Iraq and Syria to create a self-declared caliphate, Gelvin — an expert on the modern history of the Middle East, particularly greater Syria — said ISIS had been contained over the past year.

In fact, he said, it is losing territory, population and many funding sources, including oil exports, kidnapping and donations. At this point, he observed, ISIS is “primarily getting its money from a poll tax and extortion.”

In light of these circumstances, the group has changed its tactics and is now advocating shocking attacks against the West in an effort to turn the tide and drive up recruitment, he explained.

The historian stressed, however, that it was important to distinguish terrorist acts undertaken by existing groups that opportunistically affiliate themselves with ISIS — Boko Haram in Nigeria and al-Shabab in Somalia, for example — from terrorist acts undertaken on direct orders from the highest levels of ISIS. With respect to Paris, he said it remains unclear whether the attacks were opportunistic or directed.

Although not probable, Gelvin said there was now a small chance for a peace agreement — or at least a ceasefire — in Syria for three reasons.

The Iranian nuclear deal of July 2015 has made it possible to bring Iran to the negotiating table, the Russian intervention in the Syrian civil war has re-established a military stalemate (the prerequisite for negotiations), and the Paris attacks have made destroying ISIS a political priority.

“At this point, the policy of containment appears to be off the table,” Gelvin said.