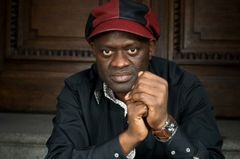 Alain Mabanckou is a professor of French and Francophone studies at UCLA and the author of “Letter to Jimmy.” This op-ed appeared Jan. 7 in the Huffington Post.

I come from a tiny country, Congo Brazzaville, where by all appearances we have historically nothing to do with the United States: we were colonized by the French, and we speak French, not English. However I live in America, and when this country comes down with the flu, I necessarily contract the same illness. When I see an African American, it occurs to me that he could be a distant member of my family, and that what happens to him in America could easily happen to me one day. The most powerful country in the world reveals its weakness when its foundations are rattled by the question of race and when the American dream evaporates into an apocalyptic fog.

America has been the site of major historical upheavals for African Americans, from slavery to the Civil War and, later, the Civil Rights movement. But have the changes brought about by these events, often ratified into law in good conscience, truly affected the daily lives of Americans, or changed their behavior toward black people? We still dared to believe that they had, until the tragic facts of reality, such as the assassination in Florida of the young African American Trayvon Martin in 2012, shattered our illusions. The outrage in the African American community was such that when a jury found Latino American George Zimmerman not guilty on all charges in the death of the black teen, President Obama went so far as to say that if he had a son, "he would look like Trayvon Martin." This implied that we were dealing with a crime of appearances, to avoid saying a crime related to race and how we perceive the "other." A black man who walks at night in a well-to-do neighborhood is presumed guilty of some criminal intent.

I learned to sing the song of freedom from African American writers. I was moved by the Harlem Renaissance, by the European exile of artists like Josephine Baker, Richard Wright, Nina Simone, and Chester Himes, at a time in America when a black person had no more value than a piece of furniture on which one tosses one’s keys. I see the marks the struggle for civil rights has left on this nation: wounds that have been cauterized but that begin to bleed again and again, giving us a feeling of déjà vu, especially when juries decide not to prosecute white police officers responsible for the deaths of Michael Brown in Ferguson and Eric Garner in New York, leaving us with the impression that justice favors one race over another. How can we forget the death of Rumain Brisbon, killed this year in Arizona, or Tamir Rice in Cleveland, an adolescent of 12 years old who was playing with a toy gun? More than 40 years after the Civil Rights movement, America seems to be back where it started, seems to be destroying this vast house that was built with endurance by hands of all colors in hopes of living in a better world.

As an African, I could say that these facts have nothing to do with me, and are far removed from my Congolese countrymen. But can I remain idle with the “sterile attitude of the spectator,” as poet Aimé Césaire wrote in his Cahier d’un retour au pays natal of his compatriots enduring the exactions of French colonial rule?

When America’s spirit shudders, when there is a trembling in the country's heart of hearts, I attentively reread James Baldwin’s “The Fire Next Time”, and I hear him whisper, “I imagine one of the reasons people cling to their hates so stubbornly is because they sense, once hate is gone, they will be forced to deal with pain ...”

And today I ask myself the same question the author asked himself at the time: “Do I really want to be integrated into a burning house?”

Still, we get the feeling that America has made progress since those dark days when great figures such as Malcolm X, Martin Luther King or John Fitzgerald Kennedy were assassinated in conditions that remain as mysterious as ever. The fight for civil rights, led with fierce determination by whites as well as blacks, was meant to redefine “American identity,” to diminish racial discrimination in a land which was forced to come to terms with many different “ethnic” communities. Today it is less about defining or redefining what it means to be “Black,” as it is about how we will carry on the flame of freedom that inspired those who died for our right to express ourselves freely, to say along with the poet Langston Hughes, “I, too, am America.”

America is again, alas, a construction site where the materials and equipment are in disarray, and it is up to us to put things in order. As police errors continue to multiply, black America is also the victim of economic instability (more than 27 percent of black Americans live below the poverty line, with a rate of unemployment double that of white Americans). The same population struggles for access to good education and good health, and makes up the greatest numbers in the country’s poorest cities. There is therefore a real debate to be undertaken here and now in order to rethink the question of equal opportunity in America that goes beyond the question of skin color. And again, one need only reread “The Fire Next Time” to understand that this essay is without a doubt the most beautiful discourse on brotherhood and of living together in the United States: