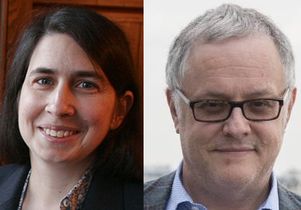 Dr. Jody Heymann is dean of the UCLA Fielding School of Public Health and founding director of the World Policy Analysis Center. Neal Baer is the co-director of UCLA’s Global Media Center for Social Impact. Their op-ed appeared March 9 in the Huffington Post.

A little girl enrolls in primary school. But in her country it costs money to go to high school. Her parents must make a decision so they pay her brother’s tuition because they can’t afford to send all their children. After all, men earn more money once they get a job. And laws reinforce this all-too-common scenario, presuming that women will stay at home and men will work, which promotes discrimination in hiring and pay that further exacerbates educational disparities. Now that she’s priced out of a basic education, her parents arrange an early marriage; that’s legal in her country.

How often does this story happen today? Far too frequently. Forty countries still charge tuition for secondary school, which disproportionately harms girls. Forty-four countries allow girls to be married at 15 if parents give consent, and since the vast majority of child marriages occur with parental involvement, this is a major loophole. And in sixty-one countries, the law explicitly allows girls to be married at younger ages than boys.

Inequality in the workplace is also still rampant. Over 150 countries treat men and women differently, legally supporting discrimination and bias by keeping women out of some occupations, allowing only men to make certain financial transactions freely and supporting only women as caregivers.

The consequences of this entrenched discrimination are great for men and boys as well as for women and girls. Economically, countries lose over $90 billion from inequalities in education. On the health care side, the costs are staggering. A girl who gives birth before she is 15 is five times more likely to die during childbirth than a woman in her early twenties. And babies born to teen mothers are twice as likely to die in their first year of life.

So what is the antidote? Equal legal rights for women and men and policies that guarantee equal access to health and education. A child born to a mother who can read is 50 percent more likely to survive past the age of 5. The International Monetary Fund, Goldman Sachs and others have estimated that major economies would see a 4 to 13 percent increase in their GDP by lowering barriers to women in the workforce.

Twenty years ago, the world came together to strengthen its commitment to gender equality to improve the lives of girls and women through the Beijing Declaration and Platform for Action. This week, representatives from around the world are gathering at the UN to examine gains and gaps and focus on next steps.

The looming question now: Is anything different from when 189 countries agreed to the Beijing Platform?

The answer has been a quiet but important Yes.

Success has come with change at every economic level.

Here are just a few examples: In 2005, Mauritius made all secondary education free and required boys and girls to stay in school until they reach 16. Since then, girls’ enrollment has jumped. And while too few countries have followed Mauritius, 89 percent of low-income countries, 97 percent of middle-income countries, and 100 percent of high-income countries have made primary education tuition-free, leading to marked increases in girls’ enrollment. In Ghana, the 1998 Children’s Act established eighteen as the minimum age of marriage, with no exceptions. The impact has been profound. Between 1993 and 2008, early marriage rates for Ghanaian girls 15-19 fell by 58 percent. And Ghana’s not alone: between 1995 and 2013, 24 percent of countries reformed their laws to prohibit marriage of girls under 18, even if the girls’ parents supported it. In 2000, Iceland introduced three months of leave for fathers, three months for mothers, and three months of leave to be shared between parents. Men in Iceland now take the most parental leave of anywhere in the world, setting norms for more equal caregiving and more equal opportunities at work.

But there are still many challenges. Inequality is still deeply embedded in the law in the majority of countries, from allowing discrimination in hiring and pay to giving men and women different legal rights when it comes to their families.

We can change that. It’s time we map and monitor change as closely as we map any road we want to travel. At worldpolicyforum.org you can monitor how your country is doing on access to education, preventing child marriage, providing time off for men and women to care for families, promoting equal rights in the workplace and in constitutions, and many other areas of opportunity. At a glance anyone can then see how one country stacks up against another and that information can be used to tell the story of inequality across the globe.

Once you have learned where your country stands, you can work to move it forward by sharing the information with others so we can together change the laws that make inequality the foundation of too many nations. Share your story of solutions you’ve found to close the equity gap by using the hashtag #CloseTheGap, or join the conversation on our Facebook page.

There is still much to do. Making equal rights a reality is essential to all our economies, to the health of our friends and families and our communities.

Together our stories and our voices are the surest route to moving policymakers and citizens alike in all our countries to ensure equity for all members of our global society.