The language of the Aztecs, Nahuatl, is undergoing a renaissance in Los Angeles, thanks in part to the efforts of a genial UCLA historian.

Once the lingua franca of Mexico, Nahuatl [pronounced na’ wat] was eventually overtaken by Spanish. Today, the indigenous language is spoken only by 1.5 million people in Mexico, many of whom live in the state of Veracruz on the western edge of the Gulf of Mexico.

But a modern version of Nahuatl resounds in L.A. At UCLA, students can enroll in beginning and intermediate classes of the language, with an advanced class slated to launch next year.

A few miles north of the Westwood campus, historians and art experts at the Getty Center are collaborating with Italy’s Laurentian Library in Florence on a long-term project to create an online, annotated version of one of the greatest works ever written in classical Nahuatl: the Florentine Codex. Only one copy exists. A virtual encyclopedia of Nahua culture compiled by a dedicated Franciscan friar in the mid-16th century, the work has never been accessible to the public — much less to descendants of the Aztecs living in Mexico.

Last fall, an entire scene of a popular television show was shot with actors speaking Spanish and modern Nahuatl, marking the first time that the Aztec language had been heard on an American broadcast.

And this September, a charter middle school in Lynwood will begin offering modern Nahuatl classes taught by a UCLA graduate student.

Standing at the confluence of these linguistic streams is UCLA historian Kevin Terraciano, director of the Latin American Institute. He was instrumental in making Nahuatl classes available at UCLA, beginning in fall 2015. Despite the fact that the Aztec language is spoken by many people in Veracruz, modern Nahuatl is rarely taught in schools or universities in Mexico and the United States. 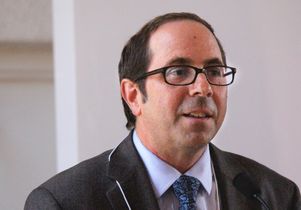 Most Mexicans, the historian says, consider Nahuatl the language of ancient Mexico. “Nahuatl was still the majority-spoken language in the Valley of Mexico at the end of the colonial period (1521–1821),” he explains. “Despite the fact that 90 percent of the population died over a 100-year period as a result of one epidemic after another, indigenous peoples were still the majority of the population of Mexico by the end of that period."

It was also Terraciano who translated English dialogue into Nahuatl for an “American Crime” episode during the show’s current season. He later coached the actors, who had to learn their parts phonetically, during the actual shoot.

And because he participates in all the Nahuatl classes taught at UCLA as the instructor of record, it was Terraciano who recommended that Luis Áviles, a graduate student in the Spanish and Portuguese department, teach the language at a middle school in Lynwood.

The UCLA historian, together with Diana Magaloni of the Art of the Ancient Americas Institute at Los Angeles County Museum of Art, is a principal investigator on the Getty Research Institute’s collaborative project with the Laurentian Library. The team is creating a high-resolution, interactive digital online version of the Florentine Codex.

Much of Terraciano’s current research is focused on the codex. Codices, or illustrated books, were the primary book form of pre-Hispanic Mesoamerica. Originally titled “General History of the Things of New Spain,” the illustrated Nahuatl manuscript “is one of the most unique, lavishly illustrated and longest such works to have miraculously survived,” says the UCLA professor. The only known copy of the work resides in the Laurentian Library of Florence. It consists of 12 books bound in three volumes and features 2,000 illustrations hand-painted by Nahua artists. The final book documents the Spanish Conquest from the Aztec point of view.

Three others working on the project are UCLA alumni, including Lisa Sousa of Occidental College. Perhaps most significant, the team includes a Nahua (an indigenous people of Mexico and El Salvador who speak Nahuatl) in the project: UCLA Nahuatl instructor Eduardo de la Cruz. His addition to the team means that the eventual online version will include a reading of the entire codex in the original language. “This is an opportunity to truly involve native Nahuatl speakers on the scholarly side here,” says Terraciano.

Terraciano has studied and worked with classical Nahuatl for over 20 years. A fluent Spanish speaker, he has also studied two other indigenous languages of Mexico, Mixtec and Zapotec. These languages and the materials written in them during the colonial period have enabled Terraciano and his peers to document the experience of Spanish colonialism from an indigenous point of view.

Three years ago, UCLA, Stanford and the University of Utah formed the Western Alliance for Nahuatl and successfully applied to the U.S. Department of Education for a Title VI grant to offer college courses in the language. The universities share resources, build curricula and train native language instructors in distance-learning pedagogy.

Nahuatl courses at UCLA are taught by de la Cruz from Zacatecas, Mexico, via teleconferencing, with students gathering in the media lab at Powell Library. Students from Stanford in Palo Alto join in so that both classes can hear and see each other as well as the instructor. 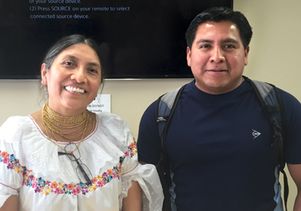 De la Cruz, who hails from a tiny pueblo in Veracruz and learned Spanish as a second language, was trained to teach his native language by IDIEZ (Instituto de Docencia e Investigación Etnológica de Zacatecas), a language and ethnology institute that promotes Nahuatl instruction and publishes language training materials, such as textbooks, readers and the first-ever monolingual Nahuatl dictionary.

“We have a mixture of students of Mexican descent who already know about Nahuatl and understand its importance — some even identify as Mexica (i.e., of Aztec descent),” says Terraciano.

Read the full story, with details on the history of the Florentine Codex.