While her grade school classmates were learning the alphabet and how to count to five, Andrea Bertozzi remembers studying negative numbers and modular arithmetic.

Math often gets a bad rap as an uncreative left brain-oriented activity, but Bertozzi recalls that, as a child, she was fascinated with it because of its creative potential.

“Teachers have trouble teaching it that way,” said Bertozzi, a professor of mathematics and director of applied mathematics at UCLA, and the inaugural holder of UCLA's Betsy Wood Knapp Chair for Innovation and Creativity. “They’re not looking at it the right way.”

As the director of applied mathematics at UCLA and a member of the UCLA Institute for Digital Research and Education's Executive Committee, Bertozzi and her colleagues conceive of math as a creative medium that can be practically used to solve real-world problems. “Our department is not one that does routine applications,” she said. “We develop new math on the boundary with other fields.”

One of Bertozzi’s most publicized projects is an ideal illustration of math in action. In a partnership with the Los Angeles Police Department, Bertozzi and UCLA anthropology professor Jeffrey Brantingham head a research team that developed a mathematical model to predict where and when crime will most likely happen, based on historical crime data in targeted areas so that police officers can preemptively patrol these districts.

The model they and their team developed based on an algorithm that “learns,” evolves and adapts to new crime data is based on earthquake science. It takes a triggering event such as a property crime or a burglary and treats it similarly to aftershocks following an earthquake that can be tracked by scientists to figure out where and when the next one will occur.

Another of Bertozzi’s projects, the deployment of robotic bees, is being done in collaboration with Spring Berman, a robotics expert and an assistant professor of mechanical and aerospace engineering at Arizona State University. 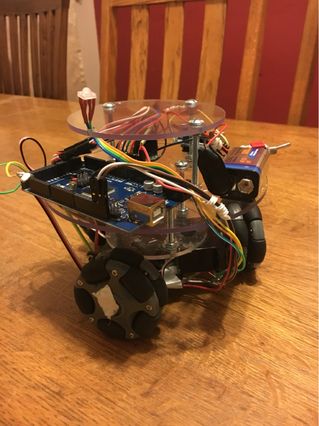 Since the late 1990s, the population of bees has plunged because of a combination of factors. Earlier this year, the rusty-patched bumblebee landed on the US Fish and Wildlife Service’s list of endangered species. Without bees to pollinate, humanity runs the risk of losing a wide swath of the world’s flora. One solution that scientists are looking into is the development of robotic bees.

Bertozzi and Berman are studying algorithms that would send out a cloud of these robotic pollinators to certain plants. In the applied math lab at UCLA, undergraduates have created earthbound robotic bees to test path-planning algorithms for simple robots without GPS trackers. The group is planning to present the results of testbed simulation “flights” at a conference.

Bertozzi isn’t exaggerating when she says she is working on a broad research agenda. Her interest in non-linear partial differential equations and applied mathematics has led to projects in everything from image-processing to cooperative robotics and high-dimensional data analysis.

“It turns out that a lot of my recent projects have social components,” she said. “I have a lot of ideas; we work on those that I can pitch to the funding agencies.” She and her students have used a powerful computer resource at UCLA, the Hoffman2 Cluster, provided by the Institute of Digital Research and Education, to do their complex calculations.

Although her research goals are all complex, Bertozzi has a concise philosophy on math.

“You can think of math as a language that describes the real world,” said Bertozzi. “It’s about always reinventing and adding different structures to things.”

This story appears on the website of the Institute of Digital Research and Education.