After police detective Jeffrey Heffernan was seen carrying a sign for a mayoral candidate, he was demoted. This appears to be a pretty clear violation of the First Amendment, which protects non-political public employees from being punished for supporting someone running for office.

But Heffernan wasn’t actually showing his support for Paterson, New Jersey mayoral candidate Lawrence Spagnola. He was picking up the sign from Spagnola’s office for his bedridden mother, whose sign had been stolen. During Heffernan’s trial and appeal, the city successfully argued that because he was picking up the sign for his mother, he wasn’t actually exercising his First-Amendment-protected rights and therefore his demotion wasn’t a violation of the law.

So does the First Amendment still protect Heffernan if he wasn’t actually engaging in political activity?

That’s the question at the heart of Heffernan v. City of Paterson. And thanks to students in the UCLA School of Law Supreme Court Clinic, the Supreme Court, which heard Heffernan in January, will soon be making that determination.

The clinic, which began in 2011, is a course for second- and third-year law students who work together and with professor Stuart Banner to convince the Supreme Court to hear a case. In previous years, students have written amicus briefs for cases already before the court. This is the first year students had cases accepted for review based on a petition for writ of certiorari (the document filed asking that the Supreme Court hear a case) that they wrote. 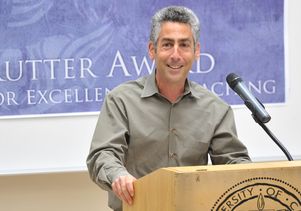 “They do research. They write the documents we file with the court. They help decide what cases we’re going to take. Basically everything that I do, they do, too,” Banner said. “Of course, I edit their work, but they basically do all of the work that a lawyer would do to try to get a case to the Supreme Court, and then actually write a brief once the court has agreed to hear a case.”

This year the court has chosen to review four cases brought by the UCLA Supreme Court Clinic. For perspective, each year about 10,000 cases are presented to the court, and 60 to 70 are selected to be heard, Banner said.

The cases cover a range of issues. Torres v. Lynch, for which the court heard arguments last November, is an immigration case that deals with what constitutes an aggravated felony. On Feb. 22, the court will hear arguments in the case of Utah v. Strieff, which is about search and seizure. Later this year, arguments will be brought for Betterman v. Montana, which addresses the right to a speedy sentencing following a conviction.

There are similar clinics at other law schools, which is where Banner and his peers got the idea to start one at UCLA Law. The clinic accepts six students each semester. The work starts with students going through cases in lower courts to determine which would be good candidates for the clinic. They’re looking for cases that deal with constitutional issues that have elicited conflicting rulings from lower courts. The clinic typically also focuses on representing someone who wouldn’t otherwise be able to afford to pay for a lawyer, Banner said.

Students conduct all of the research to write a Petition for Writ of Certiorari, known more simply as a “cert petition.” The cert petition must explain why the lower court’s ruling was wrong and why the case has constitutional significance to warrant review by the Supreme Court.

Each week, students meet as a group with Banner and Fred Rowley, a partner at Munger, Tolles and Olson, who co-teaches the Supreme Court Clinic, to discuss a different aspect of Supreme Court practice. They also have weekly meetings with Banner to go over the work they’ve done on their cases.

Adam Lloyd, who graduated from UCLA Law in 2015, said that the work he did on Torres v. Lynch directly prepared him for the work he does now that he has graduated.

“I am currently clerking on the Ninth Circuit, and we handle a lot of immigration cases,” he said. “I was interested to work on this case to gain exposure to immigration issues that I could encounter when I started clerking.”

In Torres v. Lynch, Jorge Luna Torres, a lawful permanent U.S. resident who is also a citizen of the Dominican Republic, is arguing that he should not be deported based on an attempted arson conviction in New York. The Supreme Court will decide whether such an offense constitutes an aggravated felony justifying the removal of a permanent resident. 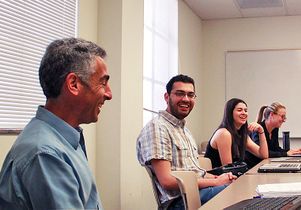 A new class of students started in the clinic this semester and will finish the remaining work on Betterman v. Montana, before attending oral arguments for the case. While the students in the class and Banner take a trip every year to Washington D.C. to see a case, this will be the first time students get the opportunity to watch their own case.

“I remember standing on the steps in front of the U.S. Supreme Court and wondering what it would be like to be a lawyer walking up those steps before oral argument,” student Alexandria Walker said. “I know the trip will probably be a once-in-a-lifetime trip and it will probably be one of the highlights of law school for me.”

That experience will be just one of the benefits derived from participating in the clinic.

“Getting to draft cert petitions is not something that many lawyers have the opportunity to do in their careers, so I feel very fortunate to have had the opportunity while still in law school,” Lloyd said. “This was my favorite course I took at UCLA.”

Third-year law student Danielle Leneck said that while the opportunity to work on cert petitions drew her to the course, the excitement comes from helping real litigants after spending so much time in the classroom.

“We have a lot of clinical courses where the students work on cases at various levels of the court system, and I think that’s just a great experience for students,” Banner said. “After a couple years of sitting in the classroom, it’s really valuable to get out there and actually do the work that a lawyer does.”