The two-week meeting is the 20th Conference of Parties (COP20) to the U.N.’s Framework Convention on Climate Change, the same international group that adopted the Kyoto Protocol in 1997. The annual conference runs Dec.1-12 and aims to lay the groundwork for a successor to the Kyoto Protocol in time for countries to commit to a new agreement when they meet again at next year’s conference, with the goal of addressing some of the more devastating impacts of climate change.

The students have been preparing for the COP20 conference all semester through a clinic at the UCLA School of Law taught by Cara Horowitz and Jesse Lueders. This is the third such trip for Horowitz, the co-executive director of the law school’s Emmett Institute on Climate Change and the Environment, who has taken students to U.N. climate conferences in Copenhagen and South Africa. 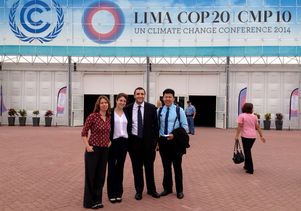 “I love giving students the chance to see international climate-change negotiations up close and for them to feel what it’s like to be part of finding a global solution,” she said. “These trips are always eye-opening for the students and for me. It never gets old.”

UCLA is one of only a handful of universities nationwide that send students to these high-level meetings.

The UCLA group is submitting two reports demonstrating the success of cool-rooftop policies in Los Angeles and green building codes in California, both of which have reduced greenhouse gas emissions and helped with local adaptation to climate change. The reports suggest how the U.N. can assist in the adoption of these programs by other nations, from major industrial polluters to small developing countries. Similar research into ways of adapting to climate change is being done across campus as part of UCLA’s Grand Challenge Project, which aims to use UCLA research and examples of existing policies to shift Los Angeles County to renewable energy and local water by 2050 while protecting biodiversity.

While in Lima, the students knew they wouldn’t have much time for sightseeing. They spent long days and nights attending negotiation sessions and providing legal analyses and other support to small island nations. They worked at the direction of the same client they have had during fall semester, the nonprofit Islands First, which assists small, developing island nations in international negotiations.

“These islands are … under-resourced, so they often come into these international conferences without the legal resources, the manpower or the expertise to be on an even footing with some larger parties,” Horowitz said. “Some of them are entirely within 2-3 meters of sea level, so they have a tremendous amount at stake in these talks.”

Tsou, who hopes to go into environmental law, was jazzed to meet delegates from some of the islands he’s been learning about all semester. But even more than studying up on Palau, Kiribati, the Maldives and other island nations, he has been cramming to learn about international climate law, proper procedures at the negotiating sessions and the success of green requirements in California’s building code.

“Since the building code Title 24 was enacted in 1978, we estimate that California has saved $30 billion,” Tsou said. “The energy saved in 2012 alone is equivalent to about 17 billion pounds of carbon dioxide. California is a leader in this area. The hope is that certain parties at the conference will read our report and adopt similar building codes in their own countries.”

Before leaving Los Angeles for Lima, Tsou and his classmates, second-year law student Sarah Kozal and third-year Jacob Cohen, completed their reports on how the U.N. can reduce barriers for other countries interested in adapting California’s progressive building code or L.A.’s first-in-the-nation cool rooftops policy. Once in Peru, the students act as legal advisors, Horowitz said.

“Their first role was bringing California’s and Los Angeles’ own climate success stories to the international stage,” she said. “Next, their role was as support for Islands First and small developing states, helping them track the unfolding negotiations and undertake legal or other research that cropped up.”

The conference isn’t one big room filled with people negotiating, but made up of multiple negotiation tracks unfolding at the same time in separate rooms, each focused on a small portion of a larger plan. The UCLA students spread out to help Islands First cover as many meetings as possible and help resolve legal problems as they arose. In previous years, UCLA students have grappled with issues such as whether a legal barrier encountered by one country wishing to commit to reductions was insurmountable.

“Our role tends to be very small and incremental at these meetings,” Horowitz said. “Nonetheless, it’s very eye-opening to our students to see how much of international climate law depends on these small, incremental steps.”