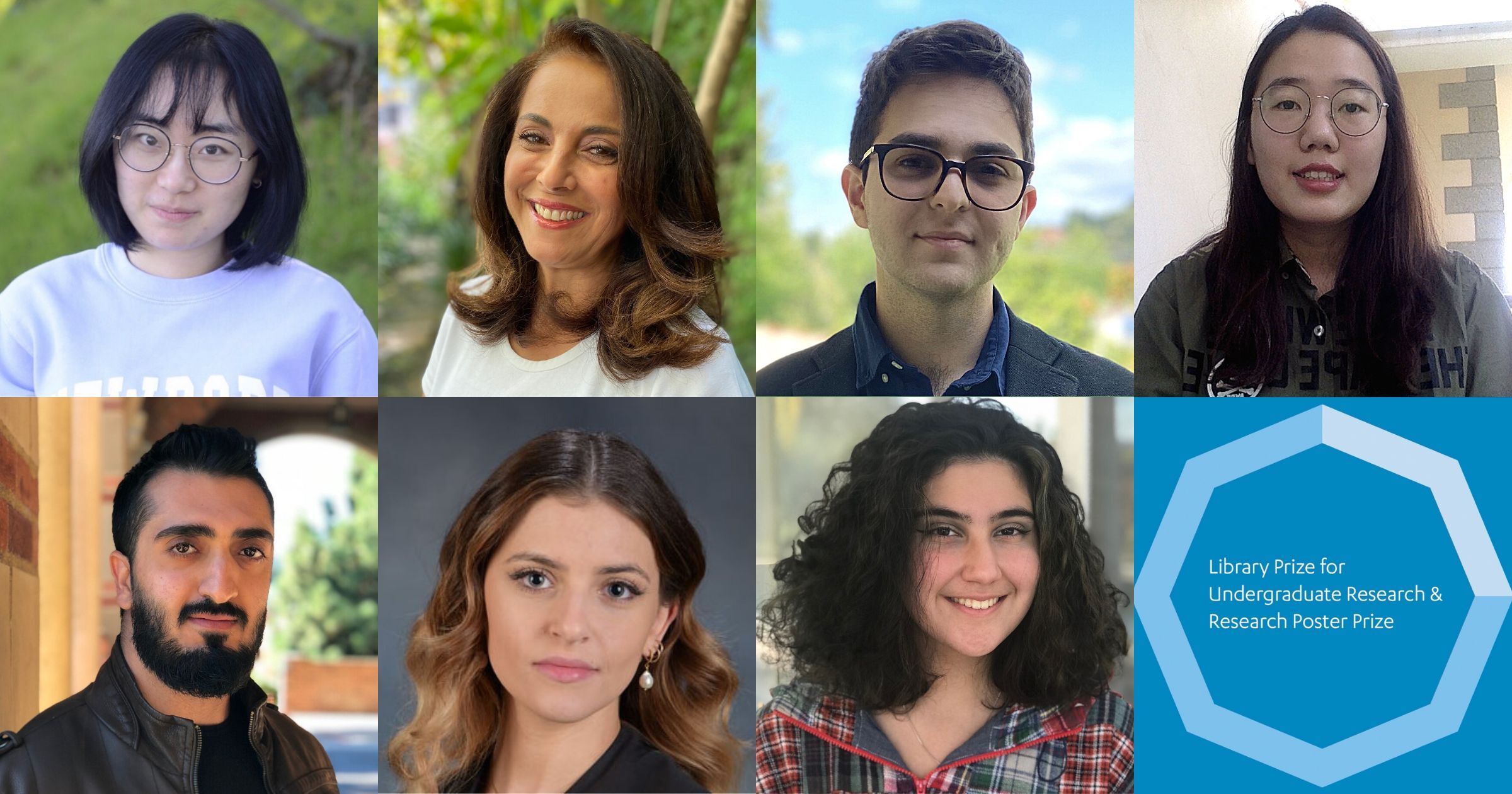 UCLA annually recognizes exceptional undergraduate students who have distinguished themselves for their excellence as researchers. Among the awards is the UCLA Library Prize for Undergraduate Research, which this year recognized five students for a research paper or course project.

“Every day, thousands of UCLA students, faculty, and staff from engineering and the sciences across the humanities use UCLA Library’s resources to pursue their academic goals,” said Ginny Steel, university librarian. “The Library Prize honors just a few of these students who have demonstrated remarkable intellectual curiosity paired with the skills and capacities to conduct meaningful research.”

New this year was the library research poster prize. Two students were selected from 117 applicants who presented during the Undergraduate Research Showcase. All seven award recipients’ papers and posters are published on eScholarship, the UC system’s open access research repository, offering their work to a broader audience.

Maddahi’s summary: This paper discusses the significance of the Western Wall in Jerusalem as sacred space from the Jewish and Muslim perspective over the course of history, through the lens of Thomas Tweed’s conception of sacred space. The objective was to find out how power, economics, culture, and religions created perceptions about the Western Wall. Politics has followed the Western Wall since its inception, and even today is a source of tension between Israelis and Arabs. Yet the Wall is also a religious space of universal attraction, as it draws people of all faiths based on religious doctrine or historical interest. In answer to the question posed at the outset, to describe the Western Wall today, it is simply a religious, national, cultural and political phenomenon.

Wang’s summary: It is a common impression that privacy protection in China has been poorly developed in all sectors throughout history. However, even in ancient China, where one’s self was defined by one’s interactions with others, the awareness of privacy still existed and the protection of such was even praised by some. Upon the establishment of the New China in 1949, the practice of privacy protection has largely been affected by related political ideologies of the party-state. Privacy protection was hugely diminished in the Maoist era due to the radical communist reforms at that time. In the post-reform era, changes have resulted in different levels of privacy protection: while people started to enjoy more privacy in the private and intimate sectors, the discussion of individual privacy versus national interest still remains somewhat taboo, and together with the increasing authoritarianism in China under Xi’s regime as well as the strategic tactics the party-state has adopted during the corona virus crisis, the suppression of privacy in this sphere is likely to sustain and even intensify in the future.

Huang’s summary: Machine learning is becoming increasingly popular in social and behavioral sciences, and is frequently used by researchers in different scientific fields to solve practical problems with complex data. Psychologists are quickly adopting the new and incredibly useful tools being developed in statistics and computer science which fit under the broad area of machine learning and artificial intelligence. The use of these tools will likely improve the ability of psychology researchers to predict out of sample data, which may be particularly important in clinical settings. However, it is important to acknowledge that these new tools do not necessarily perform in the same ways that many researchers expect based on their training, which is primarily in linear regression, ANOVA, and structural equation modeling frameworks. Ensuring that the differences between these more traditional statistical frameworks and the newly developed machine learning frameworks are clearly defined, will improve the implementation of these new methods throughout the field of psychology.

El Massry’s summary: Though Latinx students comprise 74.3% of the student population, the Los Angeles Unified School District fails to equip the students they serve with tools to critically analyze the rich cultural capital they inherit. Given the transfer of Chicanx iconography, symbols, and aesthetics into Los Angeles tattoo culture and nail art, this paper analyzes the methods by which Chicanx students attained knowledge of Chicanx visual culture and discusses their decisions to have those images placed on their bodies with the assumption that the body can be transformed into an educational tool through ​pedabody​. ​Pedabody​ involves but is not limited to the decoration, movement, coverage, exposure, or positioning of the body for educational purposes. The institutional reasons for omitting Chicanx culture from curriculum will then be discussed, followed by a discussion regarding the benefits of arts education within Chicanx communities in the hopes of fostering transformative educational practices that strengthen students and communities.

Ravaei’s summary: Traditionally, composers have set poetry to song, but there has been a recent trend of setting texts that are more quotidian, such as court transcripts or demographic data. Advertisements, unlike poetry, are by their nature ephemeral: they appear on television or a billboard for a few weeks and then disappear forever. But like the best poetry, advertisements are rich with meaning and communicate largely by way of implication. I composed a song cycle of five advertisements that aims to reveal the macabre, irony and pathos inherent in advertisements. The five that I chose were not only interesting and of an appropriate length, but had the potential to come together and create a narrative arc. ​Advertisements​ has a structure typical of multi-movement chamber works, but told through print advertisements: an invigorating opening movement (beauty advertisement), a jocular intermezzo (soap advertisement), and a tender, sentimental conclusion (gravedigging advertisement).

This study examines experiences of Iranian identifying people living in the United States and the contexts where their internal ethnic ascription differs from their externally prescribed ethnic ascription by a party or individual. (E.g. an individual may identify with the white label, but be labeled or seen as non-white and vice-versa.) Identity is fluid, context-driven, and an individual can occupy several ethnic ascriptions at once. As a result, this study does not examine ethnic identity as a “fixed” variable. What are the social contexts where this identity-conflict arises, and how do these moments impact the individual understanding one has of their Iranian identity? This study has been conducted through semi-structured qualitative interviews conducted over the duration of 3-4 months from the greater Los Angeles area. Interviews will be conducted through Zoom and transcribed. This study uses ethnic boundary making theory as explained by Andres Wimmer as a framework (2013). The aim of this study is to pursue an understanding of which social contexts contribute to constructing and deconstructing labels of ethno-racial identity among Iranian-identifying Americans in the United States.

Edaltai’s summary: Brownfield sites are properties with the presence of hazardous substances, toxic pollutants, or contaminants. Based on environmental regulations, these abandoned sites are considered non-usable due to the presence of a high level of organic and inorganic toxic chemicals. Revitalization of Brownfield sites has ecological, economical and public health implications for the local communities. Our designated Brownfield site is located on the southern California Central groundwater basin and approximately 8 miles east of the Los Angeles River, and was previously used as a steel mill and more recently as a gas station. In this study, our goal is to provide a baseline for the microbial community in association to the presence of heavy metals and toxic volatile chemical leaks resulting from previous activities. We employed the environmental DNA (eDNA) metabarcoding approach on soil samples collected from the site at different depths and transects to provide a profile of microbial communities directly associated with toxic hazardous materials. The bacterial soil composition analysis shows the overall bacterial composition of the site is altered compared to control; with the class of Acidobacteria being more abundant in the core and depth soil samples. This class of bacteria can tolerate highly acidic and heavy metal-containing soils. The identification of bacterial mixture can be a gateway to classifying microorganisms that consume or breakdown environmental pollutants and could be used for future bioremediation purposes.

The UCLA Library prizes for undergraduate research are made possible by Ruth Simon, UCLA alumna and former UCLA campus counsel. The prize for music is funded by the UCLA Music Library’s Hugo and Christine Davise Fund for Contemporary Music.