Is it possible to know somebody without ever having met them?

A decade ago, Claudia Horning attempted to answer this riddle while conducting research for her master’s thesis in information studies in what was then the UCLA Graduate School of Education and Information.

The person Horning was forging a relationship with was Miriam Matthews, who in 1927 became the first certified Black librarian in California and went to work for the Los Angeles Public Library. For the next seven-plus decades until her death in 2003, Matthews made a profound impact on both her vocation and the city she called home. She archived Black life in Los Angeles, promoted intellectual freedom while opposing censorship and was a devoted patron of the arts.

Horning, currently the UCLA Library’s director of metadata services, didn’t need to travel far to acquaint herself with Matthews. Although she transferred from UCLA (then known as the University of California, Southern Branch) after two years to the flagship institution in Berkeley and earned her bachelor’s degree in 1926, much of the historical record of Matthews’ life is found in Westwood. In the mid-1980s she conducted nearly 10 hours of interviews with the UCLA Library’s Center for Oral History Research, while in 2008 the Matthews family entrusted 19 boxes worth of her personal papers to UCLA Library Special Collections.

“My first encounter with Miriam came when I spent a summer interviewing Walter Gordon, Jr. — who was 102 at the time — about his photograph collection covering Black history and culture in L.A.,” said Horning. “Mr. Gordon had grown up with Matthews, and it was clear that he found her very impressive — as a historian and for her public service. I had been a history major and was working on becoming a librarian, so her story resonated with me. However, at the outset of my graduate research, I could not have imagined the extent to which Miriam would capture my imagination and earn my admiration.”

Then there’s UCLA Library’s treasure trove that is the Miriam Matthews Photograph Collection, which contains more than 4,600 images — many of them digitized and openly accessible — spanning so much of the Black experience in California, from Los Angeles’ mixed-race founding families in 1781 (see embedded slideshow) to 20th-century Black businesses and cultural leaders.

Through meticulous exploration of primary source material on campus and further afield, Horning wrote her thesis, “Trailblazing Librarian in the Golden State: A Look at the Life and Career of Miriam Matthews” (2012). This National Librarian Day (April 16), she offers insights on what drove Matthews’ professional and personal passions.

In the depth and breadth of your research on Miriam Matthews, what surprised or fascinated you most?

As a lifelong resident of Los Angeles, I was surprised at how much I had to learn about the history of Southern California, and I was fascinated by what I found out — not just about the racism in the region, but also about the many ways people organized against it, winning significant legal and political victories. When I was going through her papers, I remember finding a NAACP newsletter detailing how Los Angeles lawyer Loren Miller had successfully argued before the Supreme Court to overturn racial covenants preventing Black or Asian people (and sometimes Jews) from purchasing homes in certain neighborhoods. Matthews had written “Yay!” in the margins.

A common theme in Matthews’ life was her assertiveness: From requesting consideration for an academic award at UC Berkeley alongside white classmates, to pursuit of a librarian position at the L.A. Public Library, to advocacy for a monument to L.A.’s Black founders. What do you think gave her this confidence in an era when Black women often lacked a voice?

Matthews herself attributed that to her parents, particularly her mother. They left the Jim Crow South in 1907 to make sure their children would have a better life but encountered racism from their neighbors after the movie “The Birth of a Nation” was released. Matthews’ mother confronted those neighbors and insisted they treat her family with respect. In one of her oral histories, Matthews spoke about the lesson she learned: “I learned early in life to stand on my own two feet, to form my own opinions, to stick by my principles, and to speak up for what I thought was right.”

One of the UCLA Library’s priorities is collecting Los Angeles. How does the Miriam Matthews Photograph Collection support this endeavor, and fill in historical primary-source gaps documenting Black life in the city?

The photographs Matthews collected are a rich source for anyone interested in Black history, politics and culture. Her photos depict pioneering California residents such as Biddy Mason, who was born a slave but won her freedom in a California court in 1856. Another example documented in her collection was the Somervilles (John and Vada), who were the first and second Black students to graduate from the USC School of Dentistry and who went on to build the Somerville Hotel (now called the Dunbar). This ensured that those attending the first West Coast convention of the NAACP had suitable accommodations at a time when most L.A.-area hotels were segregated. 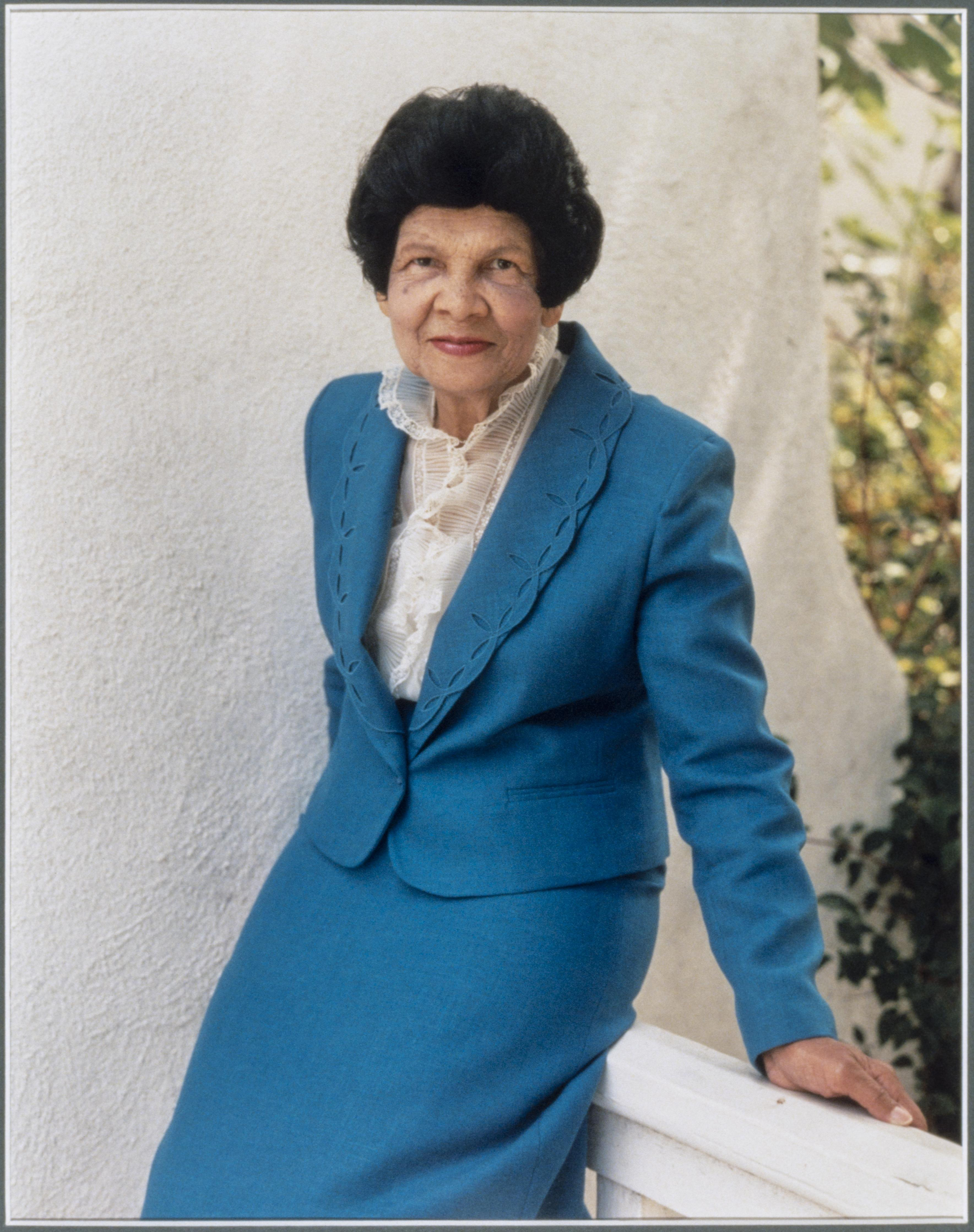 Serving on Los Angeles’ bicentennial committee in the early 1980s seemed to be the culmination of Matthews’ lifelong work and passion. How do you view the legacy she left on both librarianship, and the city?

Matthews was part of a larger movement seeking to educate people about the contributions Black Americans made to history, politics and culture, starting with her advocacy of “Negro History Week,” which Los Angeles began observing in 1931. This was one of many forerunners to what is now celebrated as Black History Month. In the days before the internet, her file of clippings became a very important reference for librarians in the Los Angeles Public Library (and beyond). It was largely her research that established that more than half of the original Los Angeles city founders — the Pobladores — were of African descent. One aspect of her work that is less well known is her support for the arts and artists. Not only did she buy their work, she would often contribute money that allowed them to buy art supplies.

Interestingly for Bruins, Matthews and Ralph Bunche were friends as teenagers. Did you discover any evidence of them reconnecting as professionals?

We know about their friendship, and her brother Charles has confirmed that they dated briefly, but everything I’ve found seems to indicate that they did not continue to interact as adults. Matthews was quite active as a professional in both the California Library Association and the American Library Association, where she worked to fight censorship and protect librarians targeted for political reasons; however, her work in that area did not seem to interact with Bunche’s work as a political scientist or diplomat.

Matthews died in 2003, just as internet use began pervading daily life. Did she share any thoughts on the impact of technology on research, teaching and learning?

Interestingly, Matthews did play something of a pre-internet role in a previous technological innovation, namely the transfer of many resources to microfilm or microfiche in order to save library storage space. No one really talks about the microform “revolution” but it really was an important development within the library world at the time. My sense is that she was much more interested in building relationships and supporting library users, and technology was very much secondary to that. At a time when LAPL had no other Black librarians, one of the reasons Matthews was promoted into leadership roles was the loyal support she received from library users of all races.