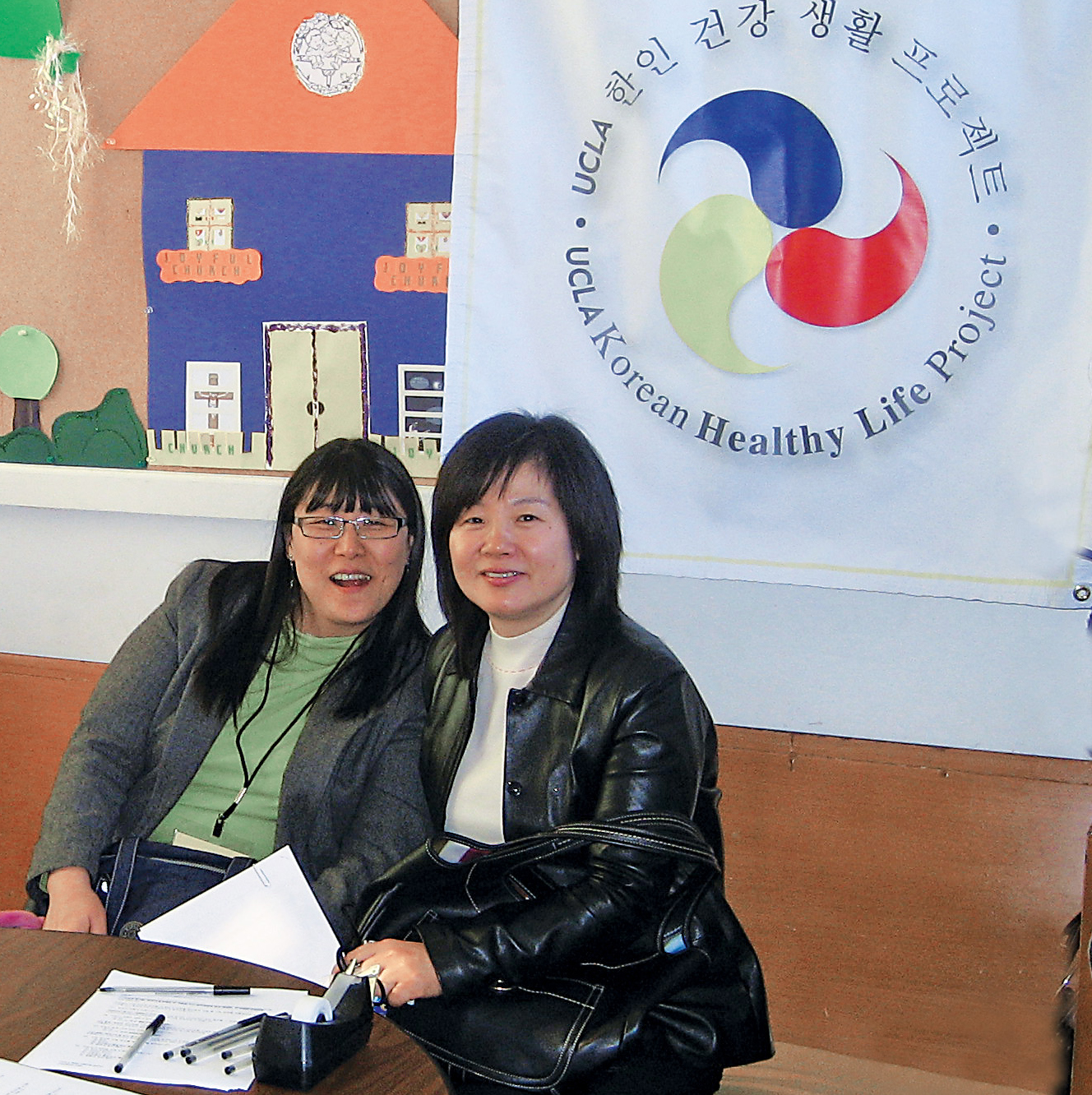 For the large Korean American-community in Los Angeles, chronic infection with the hepatitis B virus looms as a significant — and too often unspoken — health threat, associated with the highest rates of liver cancer for any ethnic group in Los Angeles. Knowing one’s hepatitis B status can be critical — it allows those who test HBV-negative to be immunized against the virus while pointing the way toward early treatment as well as more vigilant efforts to prevent transmission for those who are positive. But most adults in L.A.’s Korean-American community have never been screened and are unaware of whether they carry the virus.

In an effort to change that, a research team from the UCLA Fielding School for Public Health’s Kaiser Permanente Center for Health Equity and Center for Cancer Prevention and Control Research, working in partnership with leaders of Los Angeles’ Korean-American community, set out to increase HBV screening in the population through small group discussions led by trained community members. For their study testing the impact of this strategy, they chose unlikely venues: 52 Korean churches in Los Angeles.

“When we started, people questioned the feasibility of having discussions about a sexually transmitted virus at church,” said Roshan Bastani, the Fielding School professor with leadership roles in both centers who headed the study. “But if you want to target a general population of Koreans in Los Angeles, you have to go where they tend to gather. We learned that most Koreans go to church, and that it’s not just religious but also a social experience where non-religious services are delivered to members. In talking with church leaders and other members of the community, we were encouraged to pursue what they saw as an important project.”

If not treated, chronic HBV infection can lead to liver cirrhosis in as many as one in four carriers, which can ultimately progress to liver cancer. HBV is also highly infectious — spread not only via sexual contact and sharing needles, but also through household items such as razors or toothbrushes, or from an infected mother to her child during birth.

Because it is so common in many Asian countries, HBV disproportionately affects Asian Americans, particularly newer immigrants. The problem is particularly serious among Korean Americans. In Los Angeles, an estimated 12 percent of the Korean-American population is infected — and because the virus causes no symptoms until the liver damage becomes severe, the majority of them doesn’t know it. Although routine HBV vaccination of children has been implemented in the United States and much of Asia for two decades, most adults were born before childhood HBV vaccination became commonplace and can benefit from immunization only once they are tested and found to be HBV-negative. The potential for uninfected adults to get vaccinated, and for carriers to receive early treatment and monitoring while taking measures to prevent transmission to others, all point to the public health benefits of promoting HBV screening.

The Fielding School team relied heavily on the wisdom of its Korean-American community partners for both the design and implementation of an intervention aiming to increase screening. A seven-member community advisory committee included two church pastors, a pastor’s wife, a church elder, a church health leader, a physician and a representative of a Korean-American, nonprofit, faith-based organization. Fifty-one bilingual community members were hired as staff members for the study and trained to administer surveys and facilitate the small group discussion sessions with the churches — ensuring that the intervention could be sustained beyond the three-year study period.

One member hired for the study team with deep roots in the Los Angeles Korean community, Hosung Kim, was assigned the task of inviting the participation of pastors and other church leaders. “My role was to convince them that our project could improve the lives of their members through health care awareness,” said Kim, who covered the activities of Korean churches as a reporter working for a Korean newspaper chain. “I explained that because the overwhelming majority of Korean immigrants participate in Sunday services, this would provide the best opportunity to recruit participants ... Most of the responses were very positive.”

Of the 52 Korean churches that participated, half were randomly assigned to the study’s intervention arm, which featured small group discussions on hepatitis B among Korean adults who had either not previously been tested or couldn’t recall their results; the other half, which served as the control group, discussed nutrition and physical activity. The HBV discussions provided facts about hepatitis B and liver cancer, the risk for Koreans, and the rationale for testing. Through scripts and role-playing, participants were guided on how to bring up the topic with their doctors and encouraged to discuss HBV with family and friends. Testing and vaccination were framed within Korean medicine concepts of keeping the body healthy.

The project identified and addressed factors that prevent many Koreans from getting tested, even when they are aware of the HBV risk. Many participants expressed fear about the consequences of learning they were infected, or the potential for bringing shame to their family if they tested positive. There was also concern about the cost of the test — 57 percent of the study participants reported lacking health insurance. In an effort to overcome that barrier, the project staff provided a list of clinics offering low-cost or free HBV screening.

In the end, the discussions proved highly effective: Participants in the intervention group were three times more likely to get a hepatitis B test than those who were in one of the groups that discussed nutrition and physical activity. “Few previous studies have attempted to identify effective strategies to promote hepatitis B screening among Koreans,” said Beth Glenn, associate professor of Health Policy and Management and a member of the study team. “We were excited to see that a one-time, small-group discussion intervention produced a meaningful increase in hepatitis B screening in a population at high risk for hepatitis B and liver cancer.”

Any concerns the Fielding School team had about testing the intervention in Korean churches were quickly eased. “For some of our projects, even when we are actively recruiting, it can be hard to find people to participate,” said Alison Hermann, project director for the study. “In this case we would simply go to the churches, set up a table with our banner, and people would come to us. Part of it had to do with the sense of community in the churches, where if something was going on, members wanted to know about it. But we also found that the interest in health-related issues was tremendous.”