When Benjamin Lewis, UCLA’s only deaf faculty member, toured the Los Angeles Museum of Tolerance last year, he couldn’t help but notice that the visitors all around him seemed mesmerized as they listened intently to self-guided audio recordings describing the horror of the Holocaust.

He saw visitors’ shocked expressions and, in some cases, tears. But because all he was given as a deaf visitor was a thick textbook-like guide to read, Lewis felt that he wasn’t experiencing everything the exhibits had to offer.

“All these emotions that others were feeling were not part of my experience,” wrote Lewis in an email.

That will soon change, thanks to a partnership that Lewis forged with the museum.

For the last three months, Lewis, who teaches six American Sign Language (ASL) classes at UCLA, and six of his intermediate and advanced ASL students have worked furiously to create 18 videos of the students signing content to help guide the deaf through one of the main exhibits on the tragic timeline that led to the Holocaust.

“Even though some of our exhibits are close-captioned and have very powerful visuals,” said Elana Samuels, the director for museum volunteer services who worked closely with Lewis and the students, “auditory is an important way of teaching the history and experiencing the exhibits. So for visitors who are deaf or have hearing impediments, they are missing out on some very important information and emotion. So when professor Lewis called, we were immediately enthusiastic about exploring a partnership.” 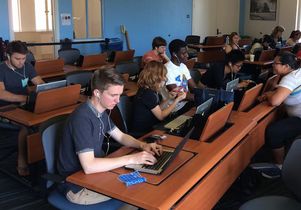 UCLA
American Sign Language students work on translating an audio guide of an exhibit into gloss in preparation for signing.

The videos, which will be made available to deaf visitors on iPads possibly by the end of the summer, will lead them through the exhibit in a way that most have never experienced fully on this subject in their native language, Lewis said.

“When it comes to accessibility,” Lewis explained, “it’s important to always focus on the fullest experience in order to understand this tragic history.”

Making these videos for the deaf, a project that became part of students’ final grade, turned out to be a moving experience in itself.

“This project was the most worthwhile thing I’ve done at UCLA,” said student Mariam Janvelyan, a fourth-year linguistics and psychology major. “It was such an amazing experience. And, yes, it was stressful and terrifying, but it was honestly the most fun I’ve had for a final, and the most accomplished and fulfilled I felt afterwards.

“I learned so much,” said Janvelyan, who not only signed, but participated in the filming and editing process. “My segment, in particular, was one that made me cry when we actually walked through the exhibit. So my toughest challenge was making sure that deaf people got the same feelings and reactions that I did from hearing about the exhibit.”

The added challenge for students, said Lewis, was to keep the somber tone for the ASL-using audience without becoming overly emotional in the translation process, which relies not just on signs, but facial expressions, eye movements and body language.

To prepare for the videos, students first took a tour of the exhibit led by Samuels. They then listened to the audio tour and wrote down the English “gloss” for translation into ASL. “Gloss,” Lewis explained, is a linguistics term that refers to a transliteration of ASL’s grammar structure and word order for the purposes of written text. So, for example, the ASL gloss for “I am going to the store” is written out for ASL translation as “Me store go-to.”

“At first, it was very intimidating to think that we would be translating museum exhibits that the public could see,”  said student Eunice Liu, a fourth-year linguistics major who had to translate the story of the Warsaw Ghetto uprising, which was “both gut-wrenching and inspirational.” The pressure, she said, came from knowing that her signing had to give the deaf visitor the same quality of information that a hearing person would get.

“This project was the perfect culmination to two years’ worth of ASL classes because I had the chance to use what I’ve learned to create something entirely meaningful and new,” Liu said.

The videos, which have gone through rounds of revision, editing and captioning, will also contain photos of the part of the exhibit being described, giving the deaf visitor a visual cue on the iPad.

The Holocaust exhibit will serve as a pilot for what Samuels hopes will be the first of many to be translated into ASL, she said.

“The Museum of Tolerance is very committed to being accessible and comfortable for all visitors with special needs,” she said. “There are many other areas that would be enhanced by using this technology and having the interpretation easily accessible and available. It truly is a very unique and very worthy project.”

Watching the students interpret, Samuels said, “was awe-inspiring to see how simple words can be communicated so successfully.”