Update: Siva Rajananda successfully completed his run on March 8 in a time of 44:17 minutes. He will now submit his time and all supporting documentation to Guinness World Records.

Until recently, UCLA student Siva Rajananda never knew what it was like to be disabled. But last fall, while sailing in the Indian Ocean during a study abroad-at-sea program, he developed an arthritic condition that affected mobility in his left knee. The avid runner and former competitive badminton player quickly rebounded. He was soon bouncing over the many hills and stairs around campus — on crutches.

This weekend, the second-year cognitive science student from Malaysia will attempt something extraordinary. Rajananda is planning to beat the Guinness World Record for 5K (one leg) crutch-running.

“I like pushing myself — doing things out of the ordinary,” he said, noting that it remains unclear whether this ailment is temporary or will become chronic or permanent. 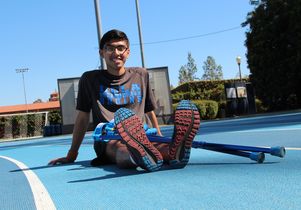 He’ll attempt this feat on the UCLA campus on Sunday, March 8, during the second annual UCLA True Bruin Move and Groove. Sponsored by the UCLA Healthy Campus Initiative and organized by UCLA Staff Assembly, the 5K non-competitive run/walk is expected to draw more than 700 participants.

According to the Guinness Book of World Records website, the official men’s record that he’ll have to beat is one hour, four minutes and 50 seconds. The women’s record is 59 minutes and 30 seconds. News media have also reported an unofficial time of 46 minutes and 47.8 seconds for a Wyoming high school student who is also trying to break the world record.

In light of this pending claim, 24-year-old Rajananda aims to complete the course in 45 minutes or less. He gave the course a test run last weekend and finished within that time.

“One thing I’ve learned is that if you really want something, you have to go out and do it,” he said. “You can’t be complacent with things. If you’re not doing it, someone else will be out there doing it.”

This is not the first time he has challenged himself in an unusual way. He signed on for his recent three-month study abroad-at-sea program without ever having spent a day on a boat. In 2012, he completed a grueling 100K ultra-marathon in Singapore.

“I feel like human beings have a lot of potential, but people often don’t explore what they can do,” he said. “We are often held back because of things like fear of failure, fear of judgment or fear of pain … but if we push ourselves beyond our comfort zone we can grow as human beings.”

To prepare for the 5K event, Rajananda had to first consult with Mike Lee, the associate director of IT in social sciences computing at UCLA, who is serving as Sunday’s race director.

After speaking with Rajananda and learning more about the rules established by Guinness officials, Lee and the event’s planning committee members jumped on board.

“I think it’s awesome,” said Lee, a competitive runner since his days as an undergraduate student at UCLA.

In all his years of running, Lee said he has never seen anyone complete a course on crutches. “I’ve seen people compete in wheelchairs, but never on crutches. This isn’t an easy thing to do.”

Unlike two-legged runners, Rajananda will have to contend with a lot of pounding on his right knee and ankle, which will be taking the full brunt of the impact, and callouses and blisters on his hands. Plus, he’ll have to have the upper body strength required to complete the challenge, Lee said.

Rajananda will also have to be mindful of maintaining a secure grip on his crutches and ensuring that the crutch pegs don’t slip on the road, which could happen if the surface is wet. He will also have to ensure that his left foot never touches the ground. If it does, he’ll be disqualified.

Despite all of these obstacles, Rajananda’s friend and fellow Malaysian Muhammad Putera Farid is confident that he will be successful.

“Siva has always been a tremendous endurance athlete,” said Farid, a third-year UCLA physics student, who will be running the course with Rajananda and helping him keep a record-setting pace. “When he told me of his plan, I knew that it was within reach, provided that he was serious about it and willing to commit to the effort.”

Farid said he’ll be running to the beat of a couple of well-chosen songs in his music player and encouraging his friend throughout the event, which will begin for the two students 15 minutes before the 8 a.m. start time for everyone else.

Also running alongside Rajananda will be two friends whose job is to make sure he always has a clear path. Another friend will be video-recording his run.

Rajananda, who is humble and a little nervous about his upcoming physical feat, said his attempt is largely a personal means to an end.

“For me, the race isn’t really about breaking the world record. It isn’t about being the best in the world. It’s about being the best self that I can be and living life to the fullest. Even if the immediate goal is to beat the time of others, the ultimate goal and achievement are within me.”

Runners and walkers can still register for the event online. They may also register on the day of the event. Proceeds will support staff scholarships and Staff Assembly programs, including the annual staff picnic and learn-at lunch events. The last runners and walkers are expected to finish by 9:30 a.m. back at Wilson Plaza, where post-race food and entertainment will await them. The event will end at 11 a.m.