When it comes to food, these are Joseph Martinus’ three favorite words.

On Oct. 22 and 23, the fourth-year English major and professionally trained chef will be sharing his style of cooking that incorporates all of those qualities with the UCLA community. He’s giving three interactive cooking demonstrations as part of UCLA’s Food Day celebration. Food Day is held annually on Oct. 24 and involves thousands of events held across the country. The UCLA Healthy Campus Initiative (HCI) is responsible for spearheading and cosponsoring three days of campus events at UCLA.

“Joseph’s enthusiasm for healthful food is contagious,” said Dr. Wendy Slusser, associate vice provost of HCI, a campuswide effort envisioned and supported by philanthropists Jane and Terry Semel that promotes mental and physical health and wellness. “His background in culinary arts gives all of us, me included, a chance to learn how we can prepare food that is delicious and at the same time preserve its nutritional value.”

Martinus believes that people should be more aware of where their food is coming from and take time to educate themselves about food-related issues. Food Day is a good way to increase awareness of these issues and spark a dialogue, he said, although he thinks these conversations should be happening daily.

“What’s mind-boggling is that food is necessary for our survival, and yet it’s taken for granted,” said Martinus. “We should be celebrating real food — simple food — every day. It’s our fuel. It matters.” 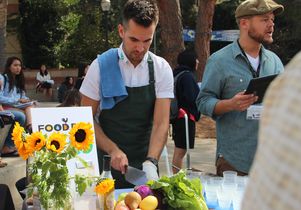 Martinus will be donning an apron in Bruin Plaza on Oct. 22 during a campus sustainability fair that runs from 11 a.m.–2 p.m. There, he will use ingredients sourced from local farms to prepare something that’s simple enough for people to make at home. “It’s all going to be raw, vegan and simple,” he said. “Nothing experimental, nothing avant-garde.”

Martinus will also discuss the value of natural, unprocessed foods and the role of sustainability as a business practice.

Later that day, he’ll take a different tack. He’ll prepare a simple menu using local food and discuss issues of class, injustice and lack of access to healthy, affordable food. The event will be held in Campbell Hall, Room 1224, beginning at 6:30 p.m., and conclude with a screening of “Nourish: Food + Community,” a 27-minute documentary on how food connects to biodiversity, climate change, public health and social justice, among other issues.

“Too often, people lack the knowledge or access to information to make sound decisions about food and nutrition,” he said. “In my community, and even within my family, a lot of people struggle with this issue.”

On the evening of Oct. 23, Martinus will go up to the Hill, UCLA’s on-campus residential community, to do another food demonstration and discuss food-related issues in the new communal kitchen at the recently renovated Hitch Suites. The event, which includes an encore screening of “Nourish: Food + Community,” runs from 6:30 p.m. to 8:30 p.m. Martinus will be joined by fourth-year biology student Elsbeth Sites from the UCLA student group Science and Food. She will discuss the science behind food and cooking. “Elsbeth will break down my recipes into scientific components and speak about the science behind my menu,” said Martinus.

As a formally trained professional chef, Martinus is no stranger to the world of food. Over the years he has evolved as he has immersed himself in food education, practically, creatively and ethically.

“At first, I wanted to be the experimental avant-garde chef, who would decompose food and then compose it back in different kinds of structures. I didn’t care about the food. I cared about the look and what I could create out of the food,” he said. His interest then grew in vegan and microbiotic cuisine, and later in multi-ethnic cuisines and layers and layers of interesting colors and flavors.

The seeds of his professional interest in food were sown early in childhood as he watched his mother open and manage two restaurants located in a popular tourist section of Tijuana, Mexico.

“At first, I was on the sidewalks rallying in tourists. A cute 9-year-old — who’s going to say no to that?” said Martinus. “I wasn’t allowed in the kitchen to cook, but I’d sneak in there to observe what my mom did — how to use a griddle, handle plates and run an expedition line. I learned a lot of kitchen etiquette … from my mom’s restaurants.”

In 2006, Martinus studied culinary arts at the California Culinary Academy in San Francisco. Since then, he has cooked in restaurants in San Francisco, Miami and Los Angeles. Eager to advance his education, Martinus studied at Santa Monica College and graduated with an associate’s degree in English. He then transferred to UCLA in 2013, where he is majoring in English and minoring in environmental systems and society.

Building on his interest in local food and policy, Martinus is UCLA’s student ambassador to the University of California Global Food Initiative’s food procurement committee, which is working to find sustainable ways to increase the amount of locally grown food served throughout the UC system and sharing best practices among the 10 campuses.

After he graduates from UCLA in June, Martinus hopes to study law with an emphasis in food law and policy here at UCLA. He also hopes to open his own restaurant one day.

“I’ve learned about so many cultures and techniques thanks to food,” he said. “Food has taught me more than you can imagine, and it continues to work instrumentally in various facets of my life.”

A schedule for UCLA’s Food Day celebration can be seen here.