In a community less than 150 miles south of UCLA, Enrique Juarez Gonzalez, his wife, Mercedes, and their children live without running water or electricity. Their sanitation system is sub-standard, and access to health care was almost nonexistent.

There are many families just like them in Tijuana’s Colonia Margarita Moran, families that are struggling to survive in an area where poverty is rampant and opportunities are slim.

Thanks to life-changing efforts by UCLA undergraduates, a small community medical clinic is the family’s only source of medical care. It was there late last year that they received an invaluable gift that lifted a huge weight off the family’s shoulders — a wheelchair for their 14-year-old son, who had to be carried everywhere because he has cerebral palsy.

“Watching Mercedes wheel Emmanuel out of the clinic with such relief, and realizing the impact the chair will have on their family, illustrates the reason we operate our clinic,” said UCLA senior Becky Barber, who along with fellow neuroscience student Lyolya Hovhannisyan founded the UCLA chapter of Flying Samaritans in 2013. The nationwide group brings together volunteers and health care providers to deliver basic medical services, including clinical evaluations, medication and health education classes.

“On a micro-level, knowing we can improve the quality of life for people in this community makes our work here worthwhile,” said Barber. She and Hovhannisyan, both seniors and aspiring doctors, received a $10,000 scholarship from the Donald A. Strauss Foundation in 2013 to support their efforts.

Barber learned about the need in Colonia Margarita Moran after hearing about the work of Dr. Maria Sarabia, a Mexican-trained doctor and Huntington Park resident who, for roughly three years, had been providing religious education and the best medical service in the Tijuana colonia. After speaking with Hovhannisyan about Dr. Sarabia’s efforts and considering what they could do to help, they founded UCLA Flying Samaritans and its small medical clinic in Colonia Margarita Moran.

In May 2013, the group began the first of nearly a dozen visits to the clinic and saw 26 patients. Now they see more than double that number each month, with the group’s outreach efforts making more residents aware of the clinic’s services. The clinic opens the third Saturday of the month with volunteer doctors and often more than a dozen UCLA students.

Most of the ailments the volunteer doctors see are preventable, said Hovhannisyan. They include hypertension, diabetes, sexually transmitted infections and waterborne illnesses, all of which can be sharply reduced through education and outreach programming, she said.

Other factors, including little to no access to fresh fruits and vegetables, clean water or warm dry places to live, make health prevention efforts more challenging. Barber said that ongoing community assessments and speaking with locals will help them better serve the people living there.

“This is a big part of our current efforts to identify the resources available to the community and give us a better understanding of the factors that are leading to a decreased quality of life,” said Hovhannisyan. “Our clinic will target the issues we find to be most clearly decreasing quality of life and implement projects to directly address these problems.” 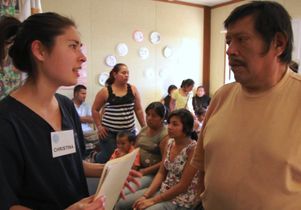 Barber’s interest in medicine was sparked by seeing her parents, both New Jersey doctors, at work. She fondly recalls from her childhood following her mom as she made her daily hospital rounds and listening to her father analyze cases in the comfort of his office. It wasn’t until she came to UCLA and went to Nicaragua with the student group Global Medical Training that she realized that the quality of health care can depend heavily on where you live and how much money you have.

In Nicaragua, she worked with a team to provide free medical care to people living in impoverished areas. Among them was Sara, a woman whose vision had been impacted by cataracts, a condition she had lived with for close to 35 years. “We brought her to an ophthalmologist where she could finally have her cataracts fixed and be able to see the world she had missed since she was a teenager,” said Barber. “Through experiences like these, I finally realized this privilege I took for granted as a child was not something others had equal access to. It became my goal to change that.”

Hovhannisyan, who moved from Armenia to Glendale, Calif., at the age 9, also had an interest in pursuing a career in medicine from a young age. Unlike Barber, her motivation was fueled by seeing the negative rather than witnessing the positive.

In Armenia, said Hovhannisyan, it’s difficult to receive medical care if you are uninsured or can’t prove that you can pay. Many people, including members of Hovhassisyan’s family, are unable to receive treatment. Even when individuals can walk into a doctor’s office, she said, they receive poor health care, primarily for illnesses that could have been easily prevented.

She couldn’t help but notice similarities between the conditions in Armenia and in Mexico.

“In both places, we see children eating with dirty hands because there is often no soap as well as a general lack of understanding about the importance of hand washing,” said Hovhassisyan. “Countless women are affected by osteoporosis due to lack of a balanced diet and intake of calcium. Even more individuals suffer from diabetes and receive no treatment for symptoms. My frustration, disappointment and empathy became my inspiration for my work in Mexico.”

And the need is growing.

The students hope to soon add a private examination room and make eye and dental care available. They’re also planning to host a community health fair to further educate residents about how to keep themselves well.

A lot of the community members are migrants from within Mexico and immigrants from other areas of Central America, said Dr. Efrain Talamantes, an internal medicine physician, Robert Wood Johnson Foundation Clinical Scholar at UCLA and at U.S. Department of Veterans Affairs, and A UCLA alumnus who serves as the faculty adviser for the Flying Samaritans chapter. “Our patients here are very poor, many of them never had the opportunity to get an education and they work physically demanding, low-paying jobs that do not support their needs.”

He said that, although Mexico has a universal health care system, the reality is that a lot of people go without medical care because of illiteracy and the lack of proper documentation. In other cases, they may not be Mexican citizens, in which case they don’t qualify for services at other medical clinics and hospitals.

“I anticipate us growing massively in this community,” said Barber. “There is so much need. And the more we keep coming, the more they’ll know where the clinic is and when we’ll be there. I want to be able to treat anyone that comes to us.”