Kim Kwan recalls being really excited when she began interning at law firm in her home country of Malaysia the summer before her freshman year at UCLA. But after one month of making photocopies, filing paperwork and looking up only one legal code for her employer, Kwan’s enthusiasm had turned to disappointment.

She wanted to help people, but instead she felt like she wasn’t making much of a difference. So during her freshman year Kwan learned of and joined JusticeCorps through the UCLA Center for Community Learning. JusticeCorps is a service organization that works with the Los Angeles Superior Court to deploy students from seven Los Angeles County universities to help people navigate the legal system on issues like family law, housing, landlord and tenant disputes and small claims.

“At first, it was intimidating and overwhelming,” said Kwan recalling her feelings as she began her first day. She was working with a litigant in the largest and busiest JusticeCorps self-help center, located in the Stanley Mosk Courthouse in downtown.

That night Kwan went home to tell her parents that she wanted to drop the program. But what ultimately led to her staying was that she was getting the hands-on experience that she had been looking for.

“There was a really steep learning curve,” Kwan said. “But I asked the attorneys and fellows multiple questions and eventually learned how to do everything from the bottom up.”

It took time and patience to learn the process and it was halfway through the year when one of the supervising attorneys finally told her that she was “getting it.” From there, Kwan said her confidence grew. More of her forms were approved and by the end of her first year, she was able to help multiple litigants at once.

“It was worth being challenged,” Kwan said. “Being overwhelmed or intimidated comes with anything new.  And for me it wasn’t the end of the world, but the start of something amazing.”

On Sept. 9, the newest crop of JusticeCorps members began their work as 65 UCLA students (plus students from six other colleges) were sworn in as civil servants of the Los Angeles Superior Court by Kevin Brazile, the assistant presiding judge and an alumnus of UCLA where he got his undergraduate and law degrees.

Wearing light-blue collared shirts with the AmeriCorps logo over the heart, the students took an oath to commit themselves to a year of service in JusticeCorps and work with the superior court toward the “ideals of equal access to justice for all.”

Together, UCLA students will complete an impressive 19,500 service hours at 11 self-help centers in Los Angeles County. During the course of the academic year, the combined work of all corps members from the seven universities will result in approximately 66,000 cases being processed by the court. 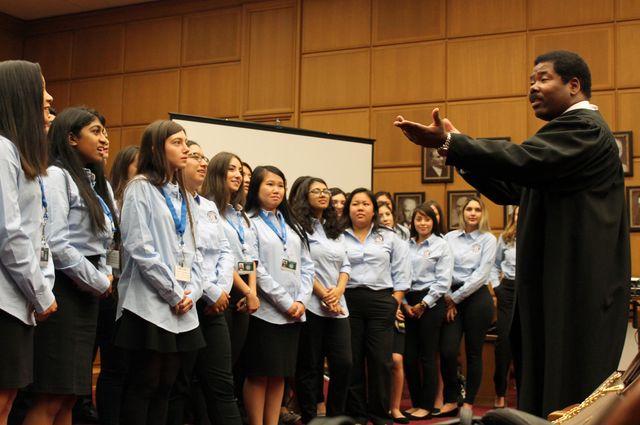 These cases represent thousands of people who come to court without legal counsel. Their biggest stumbling blocks include a lack of familiarity with legal terms and mandatory forms, and an inability to follow or fully comprehend court proceedings or orders given in court.

“People don’t know their rights and don’t know the system,” Brazile said. “And because of that, it can put them at a disadvantage — at no fault of their own. That’s where JusticeCorps comes into this. Help is available.”

Students don’t give legal advice but under the supervision of staff attorneys corps members assist self-represented litigants by providing them with legal information for their cases. They make sure clients know their rights under the law in family law, housing and small claims. The litigants decide what they want to do and then corps members walk them through the entire process. All the work is reviewed and approved by staff attorneys.

At the Stanley Mosk Courthouse alone, students help facilitate around 200 workshops each month. The superior court notes that more than 50 percent of their litigants speak languages other than English, so corps members, 80 percent of whom are bilingual, can be heard speaking in more than 20 languages helping individuals who have questions that range from paternity to name changes. Additionally, students help litigants navigate through the complicated task of completing pending legal forms, which are also reviewed and approved by staff attorneys.

Jennifer Kalish, director of JusticeCorps, notes that the UCLA Center for Community Learning, which is the campus home for JusticeCorps at UCLA, was instrumental in collaborating with the courts in 2004 to develop the program.

The center’s director at the time, Kathy O’Byrne, partnered with the courts to formulate the first grant and recruit UCLA students who could participate in social justice work and a learning-beyond-the-classroom environment.

Now, with the help of undergraduate students, “people from the public are guided through the process, and can get their voice before a judge,” said Kalish, who graduated from UCLA in 2004. 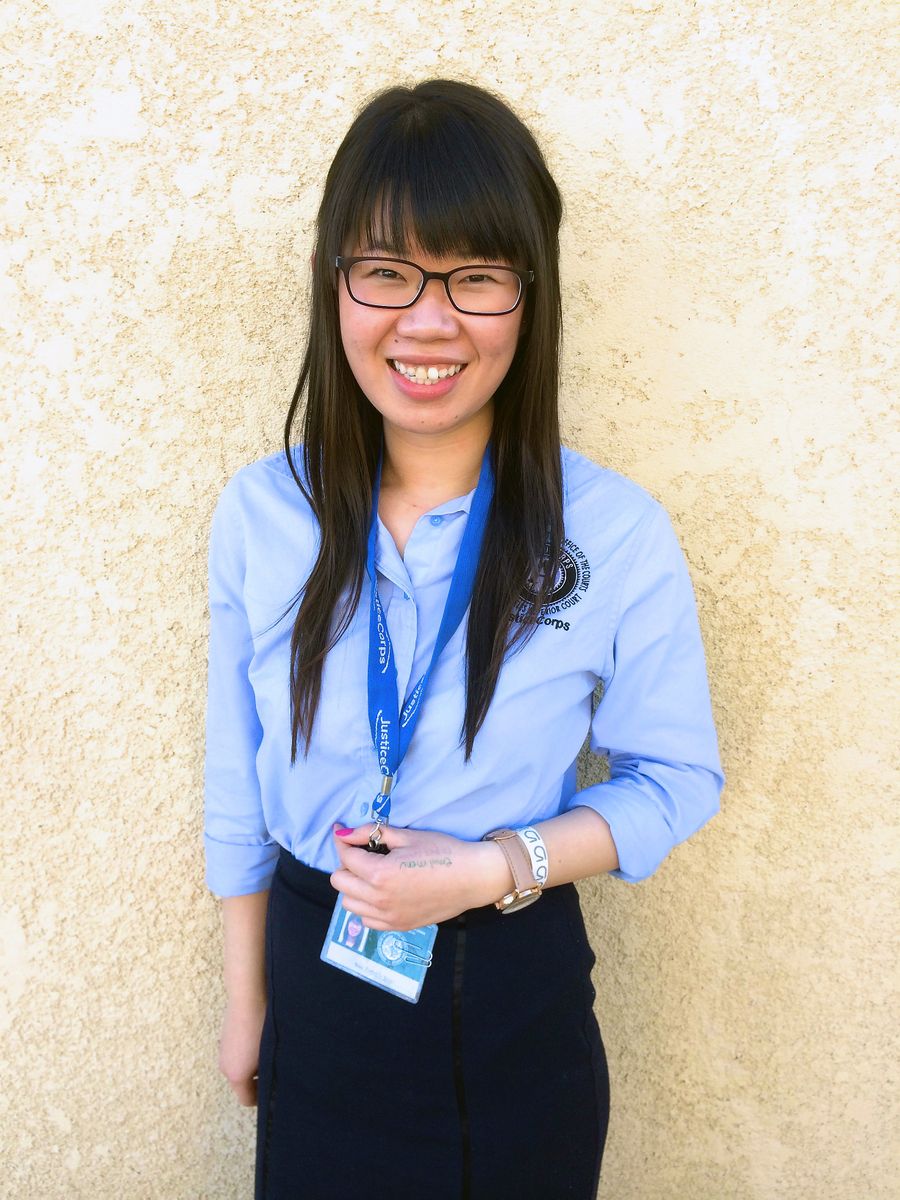 Training and mentorship through experience

To provide this level of in-depth and personalized legal service to thousands in Los Angeles County, students undergo intensive training throughout the year.

Family law attorney Erin Glass supervises the students and welcomes their questions. She sees it as an opportunity to teach students why the law is so important.

“Students who constantly remain open, and who come with questions will see the nuances of each case and will be more effective at helping litigants,” Glass said.

This formal attorney-student mentoring throughout the year is paired with informal opportunities to meet over coffee and lunch during which students can ask attorneys anything.

In addition, students are able to participate in “Shadow Day” with superior court judges. Around 30 judges sign up each year for the opportunity to explain procedures, answer questions and give students an up-close look at their criminal, juvenile and drug cases.

Looking back at her college career, Kwan says that her time working in the courts taught her professionalism, maturity, accountability and time management.

“I learned how to be a leader, communicate in a professional setting, and work on my communication and social skills,” Kwan said. “You simply don’t get this experience in a classroom setting.”

Preparing the next generation of Bruins for civic engagement

During the last 13 years, UCLA’s student engagement in social justice with the superior court has remained unmatched.

UCLA has consistently provided the program’s largest cohort of students. In fact, each year, Bruins make up more than half of the program participants. And since 2004, they have contributed close to 240,000 service hours.

“I am amazed at how involved UCLA students are and how committed they are to serving the communities where they come from,” JusticeCorps director Kalish said.

Douglas Barrera, associate director for engaged research at the UCLA Center for Community Learning notes that through civic engagement opportunities like JusticeCorps, students “see firsthand what systemic inequality looks like in the real world, and how it affects real people.”

However, Barrera says that what makes this program different is that students are in a position to help litigants involved in “potentially life-altering cases.”

“As daunting as that is at first, the students come to embrace this responsibility to assist their fellow citizens,” Barrera continued. “So often, we see that this experience sparks a lifelong commitment to working in the public interest.”

Kwan couldn’t agree more. It was the direct engagement with the public, which Kwan helped her discover that even as a student, she had a role to play in social justice.

Even when her time with JusticeCorps came to an end, Kwan’s time in the courts led her to “take a leap of faith” and pursue law school after graduating from UCLA.

Kwan began her first year at Georgetown in Washington, D.C. this August.

Reflecting on her time at UCLA and JusticeCorps, Kwan has advice for the Bruins who were recently sworn in.

“There is more to life than school, midterms or a paper,” Kwan said. “Working in the courts gives you the opportunity to be civically engaged and be a part of the community. By the end of your service, you will have a much broader perspective about what it truly means to give back.”