As the public grapples with images of violent extremism advocated by the Islamic State group, UCLA students have developed a website and social movement aimed at slowing its spread by countering recruitment strategies.

During the fall quarter, students in “Communications 163: Public Diplomacy” participated in an international competition to stall extremism used by Islamic State group, also known as ISIS. The result is Safe Spot, which is designed to foster ideals of acceptance, safety, community and ultimately discourage isolated individuals from joining extremist groups.

The class unveils its website and awareness campaign today, and submits its final report, including early findings on user adoption and reaction on Friday.

“I had no idea that this project would be so in-touch with the ‘real world’ until the first day of class when our professors laid down the expectations and recommended that we leave unless we were up to the challenge,” said Rebecca Saletta, a communication studies major. “I am so glad I stayed. I feel like I have learned more valuable lessons about public diplomacy from this firsthand experience than I could have by reading endless essays.”

Even before the mass murders in Paris and San Bernardino, students received an in-depth briefing from officers in the Los Angeles Police Department, which has one of the most sophisticated city-level, anti-terrorism teams in the country. The LAPD connected the UCLA students with Salam Al-Marayati, the president/founder of the Muslim Public Affairs Council, Omar Ricci, chairman of the Islamic Center of Southern California, and Mubin Shaikh, a former extremist influenced by the Taliban and al-Qaida and ex-Canadian Security Intelligence Service operative.

These experts provided context and insight into ISIS itself as well as Islamic belief systems, interpretations of the Quran and the struggles of modern Muslims living in the west.

Students also immersed themselves in readings that illuminated the history, evolution and tactics of ISIS. The group calls for a vehemently militaristic caliphate with dominion over all Muslims regardless of geographic boundary. The group uses the web and social media platforms to recruit, often with propaganda and messages of disenfranchisement.

The opposite of that, students hope, will be Safe Spot, a campaign that aims to create a community offering acceptance and safety for isolated individuals. 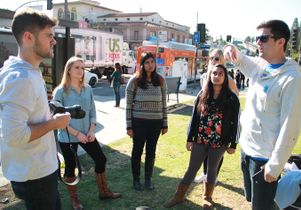 Christelle Snow/UCLA
Students made a video as part of the Safe Spot campaign.

The site includes an open community forum, a space for testimonials, links to research and informational videos, including some featuring class guests — all geared to inform viewers about violent extremism and discourage them from joining dystopian groups.

Working with a graphic designer, the students also created a Safe Spot logo that will appear on buttons, t-shirts, stickers and more.

“My knowledge now greatly exceeds what I thought I knew then, based on all the reading and research and interviews and work that went into this project,” said Cody Hitchcock, a fourth-year English major. He helped create a video using footage of class guests, some of it designed to educate viewers on the complex and often confounding issues at hand when discussing ISIS and its tactics. His hope is that the project he and his classmates just completed will inspire the same in others.

The competition — “ P2P: Challenging Extremism” — is being conducted by the private organization EdVenture Partners in conjunction with the U.S. State Department. The firm develops industry-education partnerships that provide real-world experience to students while offering their clients potential solutions to problems, as well as recruiting access at universities. Contracted by local and national government agencies, EdVenture has managed programs at more than 800 campuses around the world.

The UCLA class is one of 25 from across the country participating in the contest, as well as students from universities in Albania, Canada, France, Germany, Great Britain, India, Jordan, Kuwait, Malaysia, Pakistan, Saudi Arabia and Thailand, among others.

The top three teams will be announced later this month. Five members from each of those three teams will receive an all-expenses–paid trip to Washington, where they will present their campaigns to the Bureau of Educational and Cultural Affairs at the U.S. State Department.

Barry Sanders, professor of communication studies, has been teaching the public diplomacy course with lecturer Judy Milestone for eight years. This was the first time the class has taken the form of one long-term, real-world project, he said.

“It was a radically different than anything we’ve done in the past,” said Sanders, adding they’d happily do it again.

The impetus for the change came after Milestone heard a story on NPR about the first competition EdVentures launched last year. 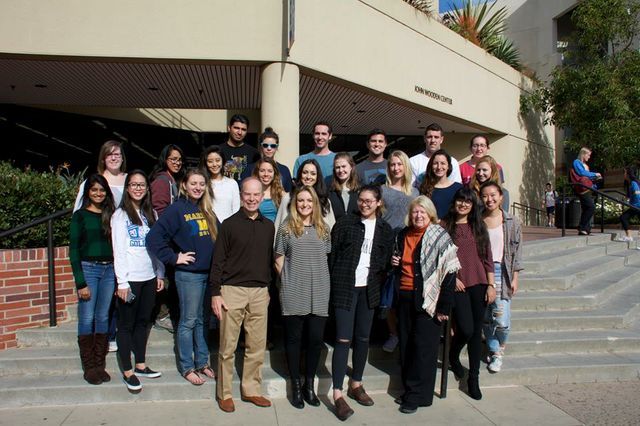 Courtesy of Safe Spot
The LAPD invited the students to attend a reception for all the Los Angles schools involved in the peer-to-peer competition sponsored by EdVentures and the U.S. State Department.

Sanders said that he was pleased with how vigorously the students tackled the pace, weighty subject matter and heavy workload.

Several students noted how the course enhanced their skills in brainstorming, teamwork and leadership, while balancing social sensitivities and maintaining accuracy as they developed cause-based messages. Images of terror and violence in San Bernardino and Paris served as emotional fuel for the final stages of building Safe Spot, students said.

Hitchcock said he hopes members of the public educate themselves about what is going on with IS. And though he’s slightly skeptical about that happening in a large-scale way, he hopes Safe Spot might foster a greater awareness.

For Saletta, the project has influenced her personal ambitions.

“For me, it has lit a new desire to pursue global communication, especially public diplomacy,” she said, “The world we live in is so complex and I don’t think I could go through life pretending I’m not really a part of it. This project has opened my eyes to some of the most complicated problems our world faces, and the exposure has left me with a deeper conviction to begin playing my part.”