“Tsuh. Tsuh,” said teacher Peng Jie as she held up four fingers on her left hand to teach high school students to say “four” in Mandarin.

While a couple of students broke the silence with correct pronunciations, others merely mumbled. Some sat silent. Scanning the furrowed brows facing her, Peng saw that the pronunciation guide projected onto the white board behind her wasn’t helping. The phonetic spelling was shown as “sì.” But the students were struggling with adding the faint “t” sound that preceded the “s” sound.

Peng extended her left arm, with her fingers curled down to mimic teeth. She then jabbed the rigid fingers of her right hand against the “teeth.” “Your tongue should do this into your teeth,” she instructed. “Tsuh.”

“Tsuh,” they all said. Then Peng went from student to student and, as each one pronounced it correctly, she smiled enthusiastically and flashed thumbs-up. A half hour later, the students could count to 10 and, under her direction, raced each other to see who could count fastest.

This kind of one-on-one attention and game-based learning at University High School in West Los Angeles was a dramatic departure from the way Peng had taught in China. But it’s an essential part of what she’s going to be expected to do this fall once she starts teaching Mandarin to high school students in Randolph County, North Carolina.

Peng is one of 115 Chinese teachers who will begin teaching this fall in public and private K-12 schools across the country as part of the Chinese Guest Teacher Summer Institute, a collaboration among the College Board, Confucius Institute Headquarters/Hanban in China, the National Council of State Supervisors for Languages and the UCLA Confucius Institute that aims to support the growth of Chinese education in U.S. schools. 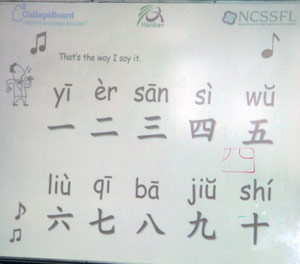 To prepare for their one- to three-year teaching assignments here, the teachers from China have spent the last two months — six weeks in Beijing and two weeks at the UCLA — learning to teach in schools and classrooms in America. Their goal was ambitious. Not only did they learn about the structure of K–12 education in the United States and foreign language teaching standards, but, most importantly, they had to discover the stylistic and cultural differences between classrooms in the United States and China.

The two months of training culminated this week with three intense days of dress rehearsals involving 160 K-12 American students who came from across Los Angeles County to University High School. While most of the students had no experience speaking Chinese, others already attended Chinese immersion schools in Los Angeles.

“It’s a place to fail that’s safe, where they can learn from the experience,” said Susan Jain, executive director of the UCLA Confucius Institute, of the practice sessions at University High. After each day, the teachers talked about their successes and struggles with one another and with the mentor teachers who observed them.

To make sure all the teachers had the opportunity to practice in front of a classroom, teams of two teachers each rotated in shifts throughout the school day.

The biggest adjustment, Chinese teachers said, was making everything more student-centered for American students. In their country, a teacher stands at the front of a class and lectures while students take notes. There are no interactive discussions and no interruptions.

To prepare, the teachers from China spent the last two months learning to create detailed, to-the-minute lesson plans packed with activities that get students out of their chairs and engaging with one another, as they did in Peng’s counting competition.

“Here, students have to practice, not just receive instructions,” said Pat Lo, an expert teacher-trainer hired the College Board to mentor the teachers. “Instead of teachers doing all the performing, we’re giving that role to the students. The teacher’s job is to facilitate that.”

Cao Fan, who will be teaching elementary-school-age children in Greenville, Mich., said the training was “very helpful,” particularly in facilitating communication with American students and designing activities. For example, to teach students animal names, he first showed them pictures of the animals, taught them to say the animal names in Chinese and then incorporated the names into a song.

Cao, 31, has been teaching Chinese in Thailand for the last four years. Like all the teachers in the program, he was selected based on interviews that assessed his teaching skills, adaptability and English proficiency. 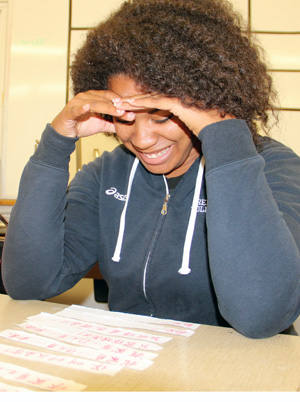 Wang Jinsha, who is headed to Deer Valley, Arizona, said that she enjoyed training at UCLA a lot. She had taught students, including Americans, at an international school in China. But “this has been totally different,” she explained. Classroom management was the biggest difference. “The students here challenge you more by asking questions, and you need to do more with class control,” she said.

In China, for example, teachers don’t need to help students form a straight line or lead them down a hall, Lo said. Students in China don’t need such hands-on guidance. Teachers in America, she said, are also more responsible for cleaning, organizing and decorating their classrooms. So the Chinese teachers brought posters, signs and lanterns, among other things, to make their American classrooms more student-friendly.

At University High, Wang was giving instructions in Mandarin to her students, who attend a Chinese immersion class in Los Angeles. So her particular challenge, she said, was trying to vary the lesson for students with different comprehension levels. She noticed that when students were bored because something was too easy, they became distracted and could become more disruptive. “I need to prepare even more and be ready to work harder,” she said.

Lisa Huang Healy, associate director of Chinese language and culture initiatives for the College Board, said that some of the teachers told her they were so nervous they had problems sleeping the night before.

Zong Shengnan was one of those teachers. “I recited my lesson over and over before I went to sleep,” admitted the teacher, who is headed to Box Elder School District in Utah. One method she will use to help her bridge the cultural gap, she said, is to show interest in the students’ personal lives.

The Chinese Guest Teacher Summer Institute was started four years ago by the College Board and Confucius Institute Headquarters/Hanban with a group of 37 teachers. This year, 115 teacher will be placed at public and private K-12 schools across 30 states, with the largest concentration in Utah, North Carolina and Ohio. The program is funded by the Confucius Institute Headquarters and a grant from the federal government’s Startalk initiative.

Teachers in this summer’s program said they wanted to participate because they felt strongly about the need to strengthen communication between the United States and China as relations between the two countries deepen.