On a sunny Tuesday morning, students shuffling into the Jan Popper Theater were handed a five-question quiz. One of the questions asked students to listen to a short clip of a loud, jarring song; then, they were instructed to “Circle the correct genre heard: a. nihilistic punk; b. skate punk; c. post-punk; d. psychedelic hardcore-punk; e. poser punk.”

After handing in their quizzes, students were treated to a viewing of the music video for Blink-182’s 1999 hit “What’s My Age Again?” which features the band members jogging nude through the streets of Los Angeles. 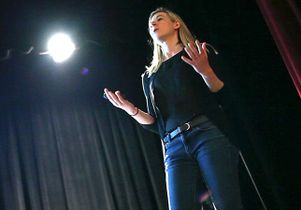 As the video came to a close, the professor stepped up to the lectern. “As a culture,” she asked, “how did we get here?”

It’s just another day in Music History 13: Punk: Music, History, Sub/culture. The class is a new addition to UCLA’s curriculum; it was dreamed up by Jessica Schwartz, an assistant professor of musicology in her first year of teaching at UCLA.

“I started getting into punk when I was around 13 years old,” Schwartz said in an interview, “so I have a pretty extensive collection of zines and books and records and correspondence.”

Her enthusiasm for the subject is evident both in conversation and in class, where it seems to be shared by her students; they remained attentive and engaged throughout an 80-minute lecture on the relationship between the political and social movements of the 1980s and the punk music of that era.

Schwartz’s passion for the genre extends far beyond the classroom: She’s also a longtime guitar player and has been a member of various punk bands since adolescence. These days, she plays with the L.A.-based Trap Girl, which she describes as “queercore noisepunk.”

Trap Girl’s musical inspiration, Schwartz said, tends to be “nihilistic, kind of artsy punk that is socially aware almost in spite of itself. It’s sharing this message under this crumbling façade, which is very beautiful and delicate and provocative.” The band’s songs address contemporary social issues ranging from safe sex practices to the violence all too frequently experienced by transgender people.

That concern with substantive issues infuses Schwartz’s course as well as her creative expression. “I think that teaching punk allows for a socially informed pedagogy,” she explained. “We learn about history; we learn about the historical and material conditions that punk comes from.” Even students who don’t care for punk music, she added, may be inspired by the politics that inform it, or by the activist bent of its performers.

Schwartz herself has certainly been inspired by it — sometimes in unexpected ways. As a doctoral student in music at New York University, Schwartz had every intention of writing her dissertation on transnational punk communities. But a chance conversation with her adviser sent her in a totally different direction, down a rabbit hole of research on 1950s America and the Marshall Islands.

From 1946 through 1958, the United States used the islands in the western Pacific as a test site for nuclear weapons. The most devastating of these, a hydrogen bomb code-named Castle Bravo, was detonated on March 1, 1954, on Bikini Atoll. Castle Bravo was about 1,000 times more powerful than the bombs dropped on Hiroshima and Nagasaki, and the fallout sickened people living on the neighboring atolls of Rongelap, Rongerik and Utirik. The islanders were given no advance warning, and were not evacuated until several days later.

“I had never really read about this place where the United States had conducted nuclear tests,” Schwartz said. “And I was an American studies major in college!”

Intrigued by a Bikinian song of mourning that made reference to nuclear testing and its fallout, both figurative and literal, she contacted the liaison between the U.S. government and the Bikinian people. He encouraged her to come and listen to the inhabitants’ songs in person.

Schwartz’s scholarship focuses on how different communities throughout the Marshall Islands were affected by the nuclear tests. The people of Rongelap, for example, suffered radiation poisoning after the initial blast and again after they returned to their still-contaminated island in 1957. Rongelap, just 75 miles from Bikini Atoll, is uninhabitable to this day. Its people were evacuated again in 1985, and are now scattered throughout the Marshall Islands as well as parts of the United States.

As a result of the radiation poisoning, many Rongelapese people developed thyroid gland disorders or cancer and required thyroid surgery — a source of particular trauma because, for the Rongelapese, the throat (“buro”) is the seat of the soul, comparable to the Western concept of the heart.

In her research, Schwartz explores how Marshallese communities engage with their nuclear legacy through song as well as through silence. Many of the songs that they sing address the detonation of Castle Bravo and its aftermath, including their exile from their homeland and the battery of medical tests they have endured at the hands of U.S. doctors. And when they are unable to hit the right notes as they sing, some will gesture to their throats and blame their damaged thyroids.

Marshallese folk songs may seem like a far cry from the punk music that originally sparked Schwartz’s interest in musicology. But she sees parallels in terms of the ways that people express the feeling that their stories have been silenced. 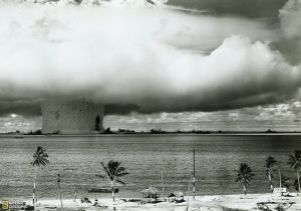 In fact, she said, the experience of being in the Marshall Islands echoed what she had been hearing in punk music for most of her life. “The area was just devastated by the United States,” she said. “Everything that I had heard about on punk records growing up — the government does this and that — it’s very palpable. It was very unsettling.”

True to her ethos of social awareness, Schwartz has followed her time in the Marshall Islands with activism as well as scholarship, co-founding the Marshallese Education Initiative in 2013. The nonprofit organization aims to increase knowledge of the Marshallese people — many of whom now reside in the United States, particularly Arkansas — and to create educational and vocational opportunities for them.

Schwartz noted that she does not believe research must lead to advocacy in order to have value. But for her, scholarship and activism go hand-in-hand. “If you are able to engage in research, you can use that research in creative outreach efforts,” she said.

“My research, pedagogy and performance all focus on the relationship between creative expressivity and social justice. I don’t think they can be separated.”