This is an article from the archives. Links and some facts and findings may be outdated.
Mike Fricano | January 9, 2014

Imagine a building that can change its shape.

No, not a real-life Transformer. But how about a building that alters its configuration as its needs fluctuate?

As self-driving cars and other technological advances transform science fiction into reality, that’s the type of challenge that UCLA Architecture and Urban Design professor Greg Lynn has asked his graduate students to ponder.

“We want to train our students to become relevant leaders in this field 10 years from now, not just go be productive service professionals in an office when they graduate,” said Lynn, who is leading one of three sections in UCLA’s highly selective master of architecture II program known as SUPRASTUDIO.

Students in the program spend a year working with one of three professors and an outside collaborator — a business, municipality or organization — on a specific theme aimed at using technology, architecture and urban design to help solve 21st century problems, such as sustaining a growing population despite limited natural resources or helping rebuild Haiti.

The other SUPRASTUDIOS are being taught by Pritzker Prize-winning architects Thom Mayne and Frank Gehry with Gehry Technologies.

Lynn’s students this year are designing buildings with intelligent robotic movement. Lynn worked with Boeing because of the company’s expertise with employing movement in its factories — huge platforms transport people working on jets so they can reach the highest sections of the planes they’re building. 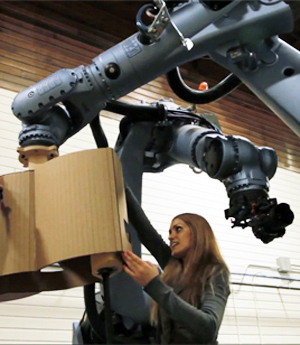 UCLA
UCLA architecture and urban design master’s student Sima Shahverdi repositions her cardboard model on the robots, which will simulate how the building could move.

“We’re looking at architecture and asking what can we move and how would we move them instead of just being open and closed. Maybe they might be moving subtly all day,” Lynn suggested. A room, for example, could shrink when no one’s using it, decreasing energy usage and other costs. “At UCLA we’re looking at people who are going to be … pushing culture, rather than following it.”

To help facilitate that, SUPRASTUDIO this year moved 9.3 miles south of Perloff Hall to a cavernous hangar on the Hercules Campus in Playa Vista where the 1940s maverick industrialist Howard Hughes once built the largest plane ever, his Spruce Goose.

The new location is also more accessible to industry collaborators, said Hitoshi Abe, chair of UCLA Architecture and Urban Design. And, at 13,000-square-feet, the hangar has enough space to accommodate some new technological toys.

This year’s students are using four robots, including the largest industrial robots employed at any college campus in the United States. The two giant Kuka robotic arms, one of which was donated by Toyota, rotate on six axes and can each handle payloads of up to 300 pounds, allowing students to build much larger models to test their moving structures. The other two are smaller Kuka Agilus robots with a payload capacity of 12 pounds each.

“We need a different kind of environment to teach in; our students are not just sitting in a classroom looking at a chalkboard or PowerPoint slides,” Lynn said. “They need to get their hands dirty with the technology at a substantial scale. We can move things 40 feet in three seconds.”

Rather than sit in classrooms, students work at tables at one end of the hangar while giant robots sit behind chain-link fencing at the other end; adjacent to the robots is the architectural technologies shop filled with lots of machines.

Abe said he likes the unfinished look of the space, which will remain adaptable to the classes’ needs, and hopes its layout and history inspire students. “Hercules comes with the legacy of Howard Hughes, who was an incredible thinker and innovator,” Abe said. “I’m hoping that … this new campus … pushes the students to be creative and innovative, and maybe a bit funky and crazy.”

More than a decade ago, UCLA Architecture and Urban Design became the first academic architectural program to integrate computer numerical control machines into the curriculum. Abe and Lynn said that the use of the industrial robots is just the latest step in shaping architectural education and part of the department’s innovative approach, which makes the potential partnerships with other businesses so exciting.

“They’re used to engineers optimizing industrial machines,” Lynn said. “But no one’s really thought about using these machines creatively. I think our partners and future partners … are excited about [robots] being used like a compass or a protractor — as a creative, expressive tool.”

Previous work has been undertaken with Walt Disney Imagineering, the National Endowment for the Arts and Toyota Motor Sales, Inc. In 2014-15, SUPRASTUDIO students studying with professor Craig Hodgetts will get the chance to work on Elon Musk’s proposed Hyperloop system that could whisk passengers between Los Angeles and San Francisco in 30 minutes via an air tube.

While the robots are a new technology-driven tool for UCLA, thanks to IDEAS robotics partner Bot & Dolly, the students can program them with the same computer design software that they use to create their studio work. Remarkably, Lynn pointed out, every student began working with the robots within two weeks after the class started.

The biggest benefit — and challenge — with the robots is the capability to use them to test conceptual designs in the real world. The design software often sends students down a rabbit hole, Lynn said. They can spend hours making minute adjustments to their buildings, sometimes without even understanding why. But with just a few hours of robot time per week, students are forced to get up from the computer and find out whether their designs work, period.

“It’s really easy to do digital animation,” said student Jackie Perez Castro, “but when you actually translate it to the physical world it’s really, really hard to think of gravity and the thickness of the material and the stiffness of the material.”

In addition to using the robots to build their models, students can attach cameras to the arms, giving them different perspectives of their models. “It’s like you have a very tiny human going through your project,” pointing out what works and what doesn’t, said Sima Shahverdi, another of Lynn’s students.

When Abe conceived SUPRASTUDIO in 2009, he viewed it as a way to redefine architecture and the role of architects.