Fifteen years ago, CNN correspondent Christiane Amanpour said goodbye to her friend and fellow journalist Daniel Pearl of the Wall Street Journal in Islamabad as she prepared to depart Pakistan for another war-ridden hotspot in the world, Afghanistan. That was the last time she would see him — a year later, in 2002, he was kidnapped and brutally murdered by terrorists in Pakistan.

“Sadly, for me and, I’m sure, for everybody, his was a death that wasn’t alone. It started a very brutal wave [of violence] against journalists,” Amanpour told a rapt audience that included Pearl’s parents, gathered to hear her deliver the annual Daniel Pearl Memorial Lecture Wednesday evening in Korn Convocation Hall. “And that has made it incredibly difficult for journalists to continue doing this job … to be committed to the religion of truth and to be passionate beyond words and sometimes beyond common sense …” 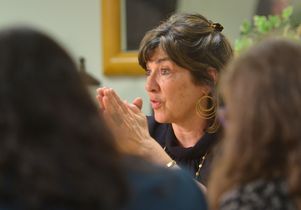 Todd Cheney/UCLA
CNN journalist Christiane Amanpour sat down to talk with students of the Daniel Pearl Magnet High School before her lecture.

Ever since Pearl’s tragic death, Amanpour, now CNN’s chief international correspondent and anchor for the network’s award-winning global affairs program named after her, has remained committed to the support of the Daniel Pearl Foundation, said Judea Pearl, Daniel’s father, president of the foundation and an internationally lauded emeritus professor of computer science at UCLA. “After Danny’s murder, Christiane was the first to join the honorary board of the Daniel Pearl Foundation,” he said, the first among many ways the CNN journalist has helped honor his memory and continue his legacy.

Known for her fearless and compelling coverage of global conflicts, especially the Yugoslav wars that brought her to global prominence, Amanpour has been an outspoken champion of human rights, said Kal Raustiala, who introduced her to the audience and later joined her in an on-stage conversation. Raustiala is a law professor and director of the UCLA Burkle Center for International Relations, which cosponsored her talk along with the Pearl foundation.

But the fight to “take that torch of light and truth and shine it in all the dark corners,” said Amanpour, is becoming increasingly difficult at a time when the world needs to know more facts about the war in Syria and other important issues as well as the truth behind the claims and promises emanating from the presidential campaign trail. "The merchants of doubt have become a growth industry," she said, deliberately confusing people about what's true and what's not.

“The most dangerous world view is the world view of those who have not viewed the world,” she said.

“Not only are we in a civilizational and existential war right now, with what’s going on with ISIS … but we’re also in a war to continue to tell the truth,” Amanpour said. “In many instances, leaders around the world — whether it be in Egypt or Russia, the Philippines or Mexico — are jailing journalists, putting them on trial, torturing them or doing worse … The leading cause of death for journalists is deliberate — it’s murder.”

Those attending the event heard Amanpour talk candidly about the war in Bosnia, the first time she viscerally experienced war as "cold, calculated genocide"; about the difficulty in the age of social media to get people to focus on important issues; and about worldwide reaction to America’s raucous presidential campaign.

“It has caused — it would be polite to say — raised eyebrows, absolute horror, shock and incredulity all over the world," she said, eliciting laughter. “People just cannot believe what’s going on here. … They’re asking, ‘Is Trump really going to be president of the United States?’”

And while she acknowledged that America is becoming more and more a fractured society, like many of the trouble spots beset by ethnic and religious rifts that she’s covered throughout her three-decade career, the nation can become less polarized and partisan with more responsible reporting.

“We can get back to [being] a country where compromise is not a dirty word, where everything is not just about identity and your tribe. It’s about community,” she said.