UCLA’s William Andrews Clark Memorial Library is all about rare things and visitors who want to explore. And this week that definition expanded to include a visitor that has the local birding community buzzing around the library’s historic grounds — a red-flanked bluetail has taken up residence on the West Adams property.

This particular bird is an extremely rare visitor to North America, and this is the first California sighting that is “chaseable” — the only other recorded sightings in the state were in the Farallon Islands in 1981 and San Clemente Island in 2011, both locations that are off-limits to civilians. The red-flanked bluetail’s migration pattern doesn’t come near North America. There have only been a handful of recorded sightings of this kind of bird in the Pacific Northwest and Alaska. Typically, this little creature would be wintering in East Asia right now. It spends its summers in northern Europe.

“It isn’t unusual for birds to miss the mark during migration and go thousands of miles in the wrong direction, but usually the vagrant birds that end up in Southern California by mistake are from Mexico, South America or the Eastern U.S.,” said Rebecca Fenning Marschall, a librarian at the Clark and an amateur ornithologist. “Having a bird that is typically found in Old World spruce forests show up here in Los Angeles is pretty strange.”

When Marschall caught sight of the bird she immediately checked in with Kimball Garrett, ornithology collections manager at the Natural History Museum of Los Angeles and a UCLA alumna, to verify she was seeing what she thought she was seeing.

“Obviously, it was very exciting for me to find something this unusual and special during a regular workday walk at the Clark,” Marschall said. “But it has been even more thrilling to see how excited the rest of the birding community is about it.” 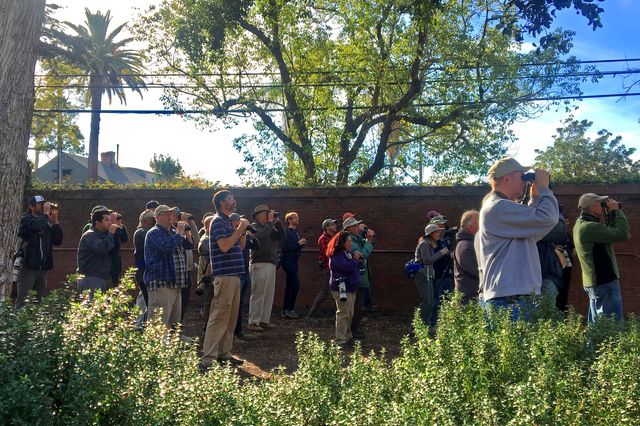 Rebecca Fenning Marschall
Just some of the several hundred birders hoping to catch a sight of the red-flanked bluetail at the Clark Library.

Local birders have been alighting on the Clark’s neatly manicured grounds in the city’s West Adams neighborhood, hoping to catch a glimpse of the small bluetail, which Marschall says is most reliably sighted in the morning and late afternoon until sunset.

“The bird does sort of have a routine and some favorite spots, but can be hard to photograph well, since it moves around so quickly and spooks so easily,” she said.

Library staff announced the bird’s arrival on Jan. 7 and the American Birding Association blogged about its presence. Since then, Marschall said several hundred bird enthusiasts have visited with cameras and binoculars hoping to catch a glimpse of the far-flung voyager.

Clark staff are delighted to welcome the winged guest and the eager members of its fandom, whom they know are hoping to capture their own photos and footage before the bluetail departs the grounds of the library, which is home to UCLA’s renowned collection of rare books and manuscripts from England’s Tudor period through the 18th century, including the world’s largest repository of materials related to Oscar Wilde.

“Bird experts we have consulted think it's likely that the bird will stick around until spring,” Marschall said. “And since it has been pretty reliable so far, it wouldn’t be surprising to see people start flying in from other parts of the country just to see it.”