It all started with a black-capped chickadee.

No one remembers whose idea it was to get the bird feeder. But the moment it was mounted on the second-story window of a house in a tree-lined neighborhood in Rochester, New York, a single chickadee landed. Peering through the window, 8-year-old Joanna Eckles’ blue eyes went wide with amazement. It had happened so quickly.

Four decades later, Eckles, now a conservation biologist, catalogues birds that collide with buildings during migration. Tragically, such collisions kill up to 1 billion birds every year in the United States. Along with her Project Birdsafe research for Audubon Minnesota, Eckles joined a growing community science effort based out of UCLA: the Bird Genoscape Project.

At the tail end of this fall’s migration, the project is now receiving feathers from across the continent. Eckles and dozens of volunteer bird enthusiasts are pulling feathers from dead birds, carefully placing them in small manila envelopes and mailing them to UCLA. Their participation has helped UCLA’s Center for Tropical Research assemble the world’s largest feather collection — now at 250,000 and counting.

Feathers naturally contain a bit of tissue at their base, which provides excellent DNA samples. Using that DNA, UCLA’s Genoscape team gets a clear picture of exactly where species breed, spend winters and make pit stops during migration. The goal is to use this information to create fine-scale migratory maps — enabling conservation efforts to be targeted exactly where threatened species run into trouble. 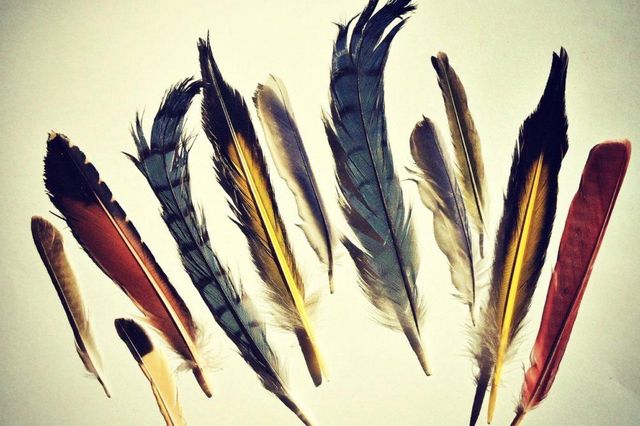 As an 8-year-old, Eckles never imagined she’d one day be part of such an advanced science project.  She was just delighted by a simple store-bought bird feeder that produced instantaneous results. She was also overwhelmed by a desire to know exactly what kind of bird was looking back at her. An obsession was born.

Her parents bought her a Birds of North America field guide. Eckles flipped through its pages over and over until she had it memorized. When it became obvious that a bigger outlet was needed to satisfy her newfound interest, her mother signed them up with a local birdwatching group. Eckles received a lot of positive reinforcement from the adult birders.

“I remember seeing a bird for the first time,” said Eckles, whose young eyes caught every movement. “I would already know what it was, because I had looked at that bird book so much.”

As an enthusiastic new birder, Eckles was also certain she knew what kind of birds everyone else in the group was spotting.

In order not to upset their new friends, her mother offered Eckles diplomatic pointers in the field. “Somebody else would spot something, and I’d emphatically say, ‘No, that’s not a red-tailed hawk.’ My mom had to pull me aside and tell me I was right, but there was better way to say it,” Eckles said, laughing.

Eckles’ passion for birding became something of a secret during her teenage years, when it was decidedly uncool to be a birder. Only a trusted inner circle of friends knew what she was doing in the woods every weekend.

But from that first encounter with a brazen chickadee, Eckles hasn’t looked back. Aside from one summer spent researching insects, her career has focused exclusively on birds.

Tom Smith, the man behind UCLA’s genoscape project, doesn’t consider himself a classic birder. But he is a bit of a pack rat. The professor, who is director of UCLA’s Center for Tropical Research at the Institute of the Environment and Sustainability, began collecting feathers as a grad student in the early 1980s — on a hunch that they contained DNA that might someday prove useful in research.

“Tenacity pays off when you are collecting samples,” Smith said. “You don’t know the value until later.”

In his wildest dreams, though, Smith couldn’t have foreseen that those first few feathers would grow today into the world’s largest collection.

His hunch about DNA is paying off too.

Getting DNA out of a feather is the easy part; unlocking the full story it tells is where the science gets complicated. It wasn’t until the Human Genome Project took off a decade ago that the information stored in genes could be comprehensively accessed and analyzed.

The science has become so exact that it can now be determined which individual birds belong to which population groups across an entire species.

“All we need is one feather,” Smith said.

For instance, the project has identified six genetically distinct groups of Wilson’s warbler, a bird population that breeds in California’s Sierra Nevada and is in sharp decline. With enough feathers from each group, researchers created a population-specific migratory map. 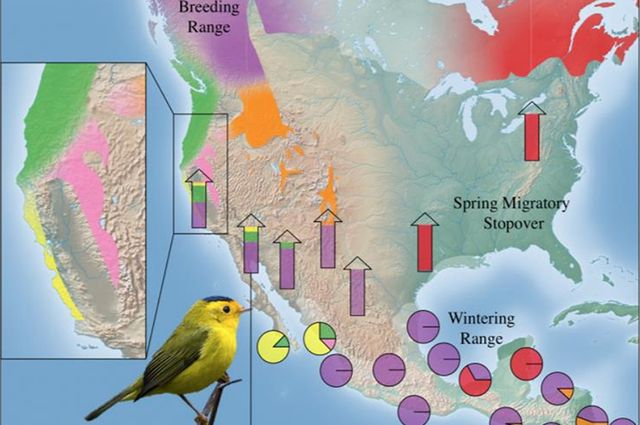 As the map shows, the group winters on the west coast of Mexico, where mangroves and dry forests — the birds’ preferred habitat — are being devastated by human development. This tells Smith that conservation efforts need to start with these wintering grounds.

One of the best benefits of genetic tagging as a conservation tool is how quickly detailed information becomes available, in contrast to leg banding, the time-intensive traditional method. “Of the 10,000 or more Wilson’s warblers that have been banded, only six have been recovered on the wintering grounds,” Smith said. At that rate it would take thousands of years to accumulate enough data for meaningful conservation.

As a conservation biologist, Eckles is excited by the novel science of DNA mapping. She also likes that the birds she catalogues for collisions perform double research duty.

Eckles and her husband bought property outside of St. Paul, Minnesota, that’s adjacent to a small wilderness area. It’s right under one of the nation’s main migratory north-south flyways. So they’ve created a deluxe bird stopover, installing a “crazy” amount of native plants, getting the tree cover just right and installing an extra water feature — just in case the natural one nearby isn’t enough to attract birds.

She’s not alone. Attentive bird-watchers are famous for being able to follow up on even the slightest movement, because one never knows what the payoff might be — like Smith’s early hunch about feathers. With the Bird Genoscape Project, they all get to show even more love to the creatures they care so much about.

This story is posted on the website of the Institute of the Environment and Sustainability.